It was my first time in New Zealand so I was super keen to get over there to meet up with the other crew who were already there – Dylan Monk, Jakob Robinson, Bowman Hansen and Dave Adair. Dave and I posted up in Auckland for the first night and spent the evening downing pints of the plain in an Irish bar with Dave’s PHC brethren and globetrotting concrete rubber Noah ‘Dirty Dog’ Phillips. We bombed hills around the city and Dave showed me some gnarly mountainous hills Levi Hawkin just destroys, and fuck, any video or photo doesn’t give what that guy does any justice… it’s full-on insanity.

The mission was to skate as many crusty old 70’s parks we could find and try get tricks. New Zealand has a long history of ripping skateboarding with some legends in the mix, like Lee Ralph! Catching up with Lee was tight. The dude just brings so much energy and is always happy, it rubs off on everyone. Best person to be on a session with and even better person to have a few beers and a chat. He has so many stories and words about NZ and skateboarding and his art, it was rad to listen. He was telling us that when Gonz first came out they went to skate this place up north at a little town called Whangarei. They intended to skate for just the day but ended up booking a hotel for nearly a week to shred – it was that good! That park is prehistoric and crusty as fuck now, and for an ode to Lee and Gonz we went and gave it the best we had to offer. It’s a must-hit for connoisseurs of dreamscape, gnarled old crust. Chur Lee! Much love. 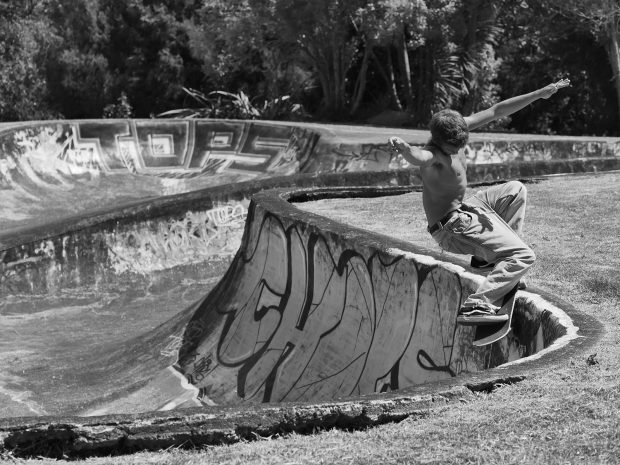 Tucked in behind the backpacker hostel in Lee Ralph’s hometown in the stunning Coromandels on the East Coast is a rad DIY. Damon pops in and out of a casual backside noseblunt

Looks like Scotch though tastes like Irish whiskey, the prehistoric gnarled crust of Whangarei is updated by Damon with the Newest Deal.

A few days later we were camping on a headland, over-looking the Pacific Ocean at Mangawhai Heads, after a killer session at the park. The park is insane – huge bowl, tight pool-like bowl, rails, stairs and just a bit of everything…such a fun time so we skated for hours! Anyway, we were sitting on this picnic table by our camp at about 10:30pm, winding down with some beers and few bungas and Dave kept glancing at the sky with this look of confusion, or well, disbelief. And finally someone goes, “What the fuck are you looking at bro?” And then everyone looks and no-one can believe it, hundreds of slow-moving, perfectly aligned shooting starts just making their way through the sky. Fuck it was funny when Dave said after we all had seen it, “Oh good, it wasn’t just in my head” – haha, good times… and good smoke too! We found out a few days later it was Elon Musk launching Space X or whatever the fuck is going on in this modern world.

Jakob Robinson. Back smith on the hip in the Mangawhai bowl

As we made our way down from Auckland to Wellington we did our best to throw in some sightseeing because the place is just so beautiful, and we finally met up with Bowen Hansen – New Zealand’s finest, and longtime friend to us all. We skated so much rad shit… new parks, street spot, everything in our path, but that place has some concrete dinosaurs, all so hard too skate, but just makes it all the more fun. All the crew were ripping them apart, though Jakob was just man-handling New Zealand spot by spot!

Kob’s off chops! Jakob puts his trust in the crust at Whangarei and flaps out a backside floater

Just like any skate trip we had some hurdles. A few of us got a bit sick or hurt, the usual stuff, but we somehow went from five dudes in one van to a convoy of four cars. Not cohesive to early starts or simple navigation and plenty of fluffing about. A couple of the lads found themselves girlfriends and went on a honeymoon – haha! They still got stuff done and kept up with us, and having the extra faces and local knowledge around was a blessing in disguise, but fuck – next time it’s just one van and that’s it, haha!

Jakob screams down the snakerun, whips around the bowl, holds on and goes the distance over Remuera’s channel 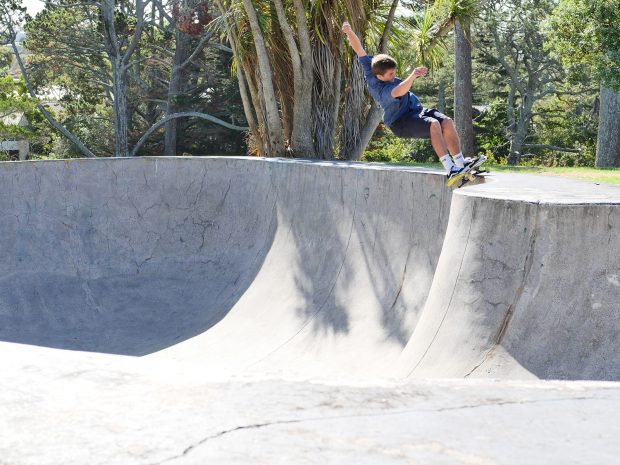 Another of Jason Parkes respectful renovations, Lynfield will see you posted up for the day, even with a new skatepark full of mod-cons just five minutes up the road. Jakob buries his back truck into one of the finest grinding noping lips

Native son now living across the ditch, Shaun Boucher leans back on the front feebs at the Wellington DIY

We made it into Wellington road-worn and wearied, however plenty of crew were in town for the annual Bowlzilla comp which maintained high spirits and it was rad to meet a bunch of locals. It was such a good time seeing the whole scene in one place getting together and skating. Jakob and Bowman, and fellow Truckstop team riders Shaun Boucher and Louis Newman, who were also in town for the comp, killed it! Our shop team taking all top four places on the podium! We had a few days skating around the city, causing all sorts of mischief and nonsense, and made it to the Wellington DIY as featured in last issue, and yet again everyone just ripped it to shreds. Hands down, New Zealand is a must-hit skate destination and it’s only getting better. Check what Jason Parkes has been building of late. Big thanks to all the people along the way – Hazey, Lee and Tarns, Peewee and the Aussie crew, and all the families who hosted us with no notice, and didn’t even know us from a bar of soap. NZ is just the best! Get over there and have a dig. Chur my Cuzzies.