It started back in September 2009.

My son Thomas called me at home and told me there was a spot that he thought we could build on. It turns out it’s this neighbor kid Lucas’s house. I really didn’t like this kid much. It seemed to me that they were always fighting, but I rode my bike down there anyway to see what was up. It turns out it was a piece of property that his Grandpa gave him.

I arrive on site to see the biggest pile of trash ever. There was garbage piled up as high as the top of their house and it spanned across the entire yard. It looked to be a couple of tons. In the middle of this pile was the weirdest skate contraption going on. It was pieces of wood making a trail up and down and all around. I really didn’t think it was possible to ride but Lucas got right up in it and showed me the one line you could do. It was terrible, but it showed me that Lucas had the passion for skateboarding.

We started by forming up a quarter pipe with a bed frame and a bike, some tires and other garbage that we could move around. We got some bags of concrete, chicken wire and poured our first piece of shit. It really was bad, but we loved it. I had left to get a beer and be stoked on what we just did when Thomas called me and said “Dad, you’ve got to come down here, the quarter pipe fell!” It turned out some local kids showed up and tried to put a parking block on top and that was the end of that piece of shit. Those kooks had the balls to say we could never pull off a good bowl out of concrete. Needless to say, those kids have never been back to the spot. 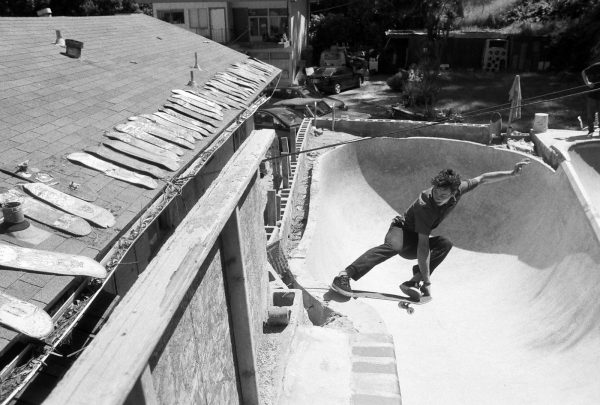 I made some measurements and started drawing up a plan for a good park. I wanted to give the kids a variety, but mostly wanted to make it tight trannys. We started building a cinder block wall around the trash and then used a majority of trash for fill along the wall.

The first piece that actually worked and is still there was the pump bump. A little rough but it works. Then we made a spine next to it with a parking block on top. I had called my good friend Mark, up in Lincoln city, and told him about our spot and asked for some guidance. Mark sent us some good trowels along with some stick figure drawings showing how to use them properly. We then made the potato off the side of the spine. This came out just like a pealed potato. I sent Mark some pictures and he realized the size of the spot and he said he was going to come down and lend a hand with some bad asses from Lincoln City.

I get a call and it’s an old friend punker Pete Gunn. He said Mark told him about the spot and that he was going to come in and help us form up the park so that when Mark comes to town we are ready. Pete really gives us a work out for the first week in order to get the place in shape for the big pour. A couple pockets and a love seat snow plow with parking blocks take shape. There needed to be a death box, but I really didn’t like the idea of just a cut out, so I figured why not make a fire pit and have the flume be the death box. This way you can have a nice fire bowl side, and do fire grinds all night! It works great. I suggest everybody makes one.

It was a really sunny morning and we all knew Mark would be here soon. Pete had been posted up for the last two weeks and his girl Sasha flew into town from Peru. All the kids that had been working for the last five months were hanging tight with anticipation, just waiting to see that big white truck pull in. Myself, Thomas, Dave Jr., little Sofia, Lucas, Aaron, Hunter, Tanner, Bodie, Sasha, Pete etc. were making final touches. Sure enough, a big horn started sounding and around the corner came Mark with a truck full of bad asses. There was Mark and Jack, pissed Ian, Wade and Dave Hupp. They came in hot! Mark changed up a section and threw up a door for a bigger quarter pipe. There was a couple big parking blocks, so Mark got the idea to make those go down the wall. We needed one more piece to make it work. I had told him I could get more but needed to wait until dark to go lift it out of this field. Mark asked, “when does the curb burglar come out?” That was how the wall name came about. The long spine is called the curb burgler. Forms were done. Trucks were ordered, pumper was scheduled and we were in a waiting pattern. Time to drink. 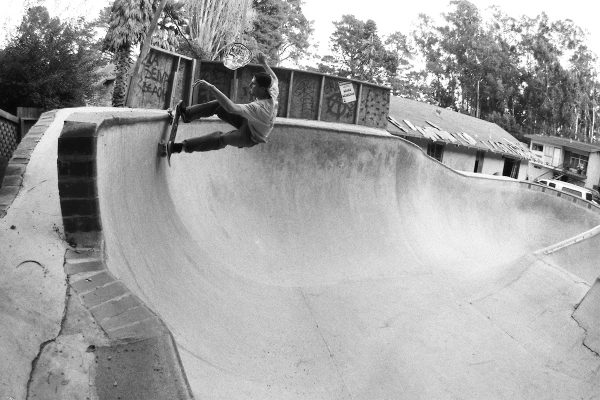 6am comes fast when hung over, but the energy was so high that nobody was fazed. First truck arrived with eight yards and it was go time. The shotcrete gun started messing with Jack and before long we had to ditch the gun and go to paste. Second truck shows up with another eight yards and the day was getting heavy. People working their guts out for hours trying to secure the ‘crete. My wife Jerusha was piping down food for the guys all afternoon which made it easy to drink the first three cases of Pabst for the day. When the sun set on the first day there was nothing but amazement in the air after experiencing how Mark, Pete and crew work.

Squid. Frontside grind in the deepend as the death box was warming up. Photo: J. Hay

6am comes again and it feels like I’ve slept an hour – sweating the beer out from yesterday’s ten cases of Pabst. I head out on a mission to see my buddy Paul about welding the shot crete gun back together. When I arrived back at the job site the truck is already backed in. The gun works great and we get the next two trucks in and out. Music amp on 11, Mark makes some finishing touches and the dust is settled. Another amazing day and ten more racks of Pabst went down.

On May 3rd, 2010, Grandpa’s was born. Coping dry and the crew was ready to see what could be done. The first time the fire box was lit was crazy! It was so cool to see it actually work. A big fire coming out of the pit and flames spewing out the box as people grinded their way through the flames. Rad!

Max Shrädder from Germany stopped by Grandpa’s during his California tour and got rad. Photo: Kevin Miles

Since then the park has seen two more big pushes. We made t-shirts and skateboards to raise money. Mark and Pete have been down with some of the same crew and some new rad dudes like LJ, Tavita, Zarosh, George, and Soup to name a few. Altogether the park has almost 40 yards of ‘crete, four different pool copings, 176 bricks, nine parking blocks, an eight foot deep end with six light boxes and hand poured aggregate coping. 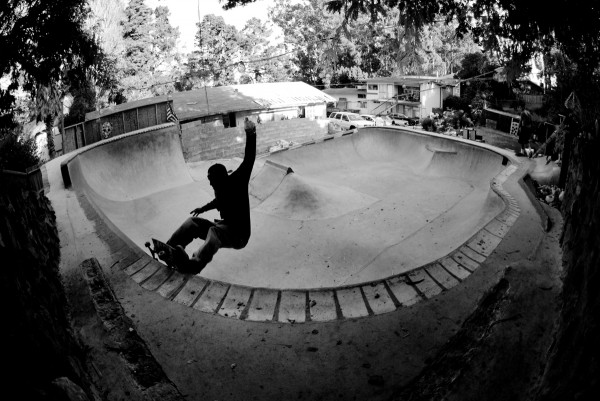 Keg stands at 9am on pour days – the bond the guys have made over the last three years is amazing. The crew has been invited to work at others spots and traveled around together, skateboarding and enjoying the outdoors and Lucas has become like a third son to me. All and all, it has been one fun ride with these dudes and I look forward to making many more spots along the way. 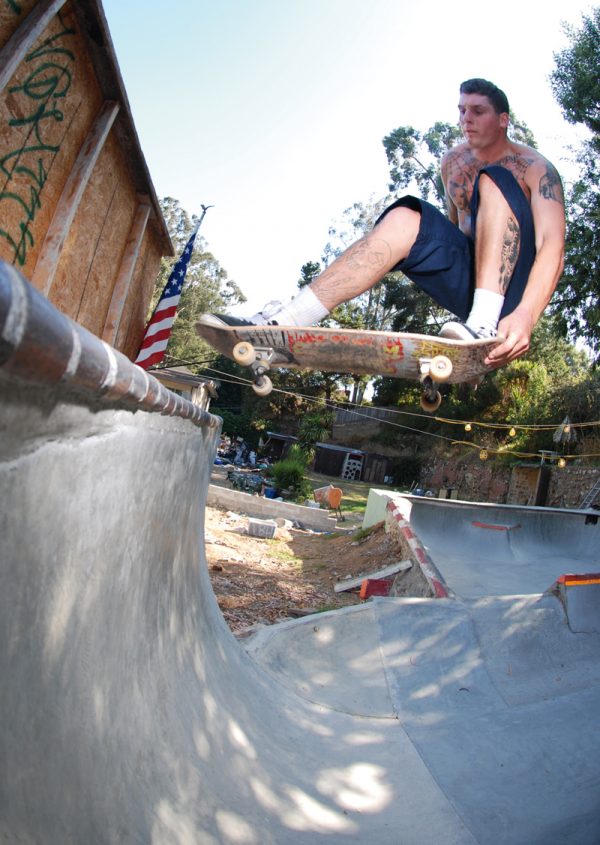 I want to give a special thanks to Sofia, Grandpa and Lucas for believing in us and letting us do what we want, Mark Scott, Family and all his crew from the north west for ripping endlessly, my wife for putting up with man camp for weeks at a time, to Thomas and Dave Jr., Aaron, Hunter, DT, Grant, Nate, Cory, big Chris, John, James, Tanner, Garret, Cody, Zarosh, Lincoln, Travis, and Beau for all the recycling and hard work selling tees and getting donations, Bill’s Wheels and the Boardroom for their generosity, NHS for their continued support of skateboarding.  – Dave Friel