It’s been pretty much exactly a year when I talked on this channel about professional d.i.y. and told you about a new street / flowpark we had built in Glücksburg near Flensburg on the most northern tip of Germany. And I remember promising you that I would try to realize more skatepark projects in my hood in the years to come, but I never would have imagined to have good news about that so soon after…

The original plans drawn by one of the kids…

We had just finished Glücksburg when we heard that there are some ramps about to be built in a small town called Hörup, this time about twenty kilometers west of Flensburg. Three days later we drove there for what was supposed to be the last meeting in which the original plans were about to be confirmed and manifested. Those consisted of a 500 square meter aspahlt area which would already have swallowed half of the budget and then fools would have had about 23.000,- euros left to buy some prefab ramps. As we all know this concept already sucked big time in the ’90s and Germany is full of useless and abandoned so-called skateparks like that. Especially in little towns and communities in the countryside, because people there just don’t know any better, just as the people of Hörup didn’t. 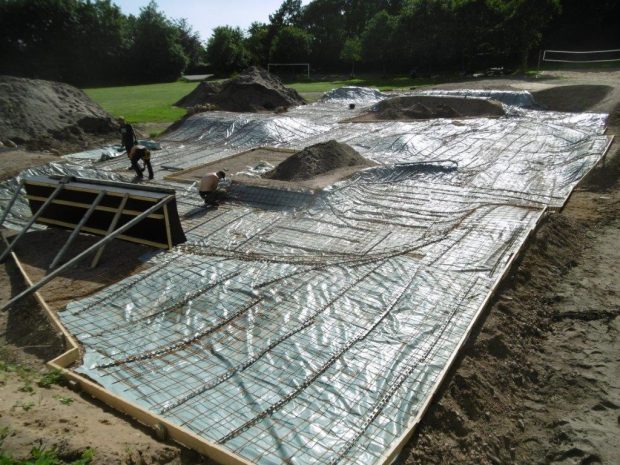 Well, after they heard that we were the ones who had just built the park in Glücksburg we pretty much sold them a concrete skatepark in two minutes, at least they realized we were the ones to trust and get involved to get the maximum out of the tiny budget. Of course, all the paper work had to be redone and everything, but things soon looked pretty good that we were about to build another skatepark twenty minutes out of Flensburg sooner or later. Sweet as… 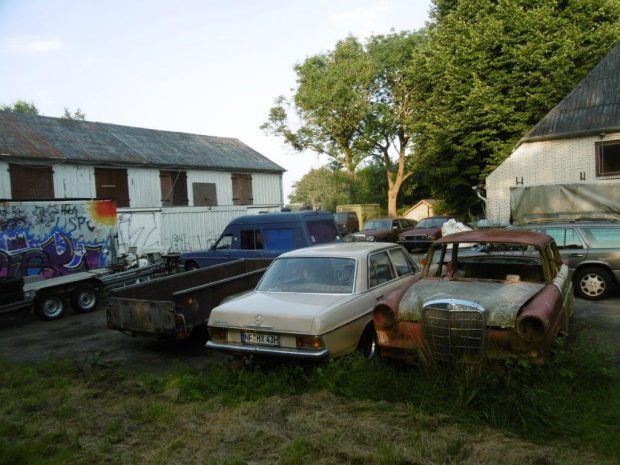 This is just Frerk’s frontyard…

You have to know, Hörup is a small village to say the least, there’s 640 people living there, but they have a big sports association with 300 members and some impressive facilities. Besides that, they’re doing quite well with wind and solar power, so there’s some decent tax money floating around. Since we didn’t know any skaters from Hörup we were told there’s just a couple of kids riding scooters and BMX bikes, but that’s about it. Imagine, you’re gonna build a 500 square meter park for literally no skaters! So it was clear from the beginning that as for a design we would neither need a deep bowl nor a street plaza, but more some kind of flow pump track with some skate obstacles in between.Of course, it was to become a skatepark scooter kids could use as well, and believe me, I had some sleepless nights working out a decent design considering all this and the fact that we would have to improvise a lot with the actual building to stay in the budget. I wanted to try some new techniques, too, since you have to take advantage of a situation when people trust you completely and let you do what and how you want.

Frerk talking business with a friend.

So you know the situation where you fight for a skatepark in your local community for years and are almost about to give up before it finally happens!? We totally skipped that scenario in Hörup, we just got into it by accident so to say, and very last minute. So on the Fourth of July, like eight months after we attended our first meeting there, I started moving dirt with the local community worker Michael who was a big help for the two months to come. Keep in mind, the one little shop Hörup used to have had closed earlier this year, so the next supermarket is about seven kilometers away in Schafflund. Since neither I nor most of the guys coming to help have a car not to speak of a matching license, sometimes it really turned into a mission to get the crowd fed.

Coffee break with some friendly neighbors

On the other side we were super lucky with the accommodation situation. My mate Eyk had told me about this guy Frerk whom I’ve met a couple of times around 15 years ago. Frerk is living on an old farm in Riesbriek, the village next to Hörup. They used to live there with five, six people, but over the years people seemed to have grown up, got families and the likes, besides Frerk. So now he’s living there on his own. Well, he’s not alone, he has about 25 old Mercedes cars spred out on his property, and we’re talking like real old and really old here. It’s his passion, he’s restoring old Mercedes cars, and I remember when I first came to his place those fifteen years ago there were at least twice as much cars standing around. You have to know that the impressive attic of the barn in which they work on the cars is full of spare parts and everything you could ever need for an old Mercedes. You need it, Frerk has it, a 100%! There’s a lot of freaks like him in that area, and everyone is into his own brand, be it Opel, Ford, whatever, but only those vessels from the golden age of car building. So Frerk never really is alone, there’s always friends coming over to help or – and that is a very important part of that lifestyle – drink a beer or two and talk about cars and new purchases.

Enter us! You can imagine a bunch of dirty skatepark builders fit in perfectly in that whole environment and Frerk showed us some decent northern hospitality and we generally all had a very great and special time. Friendships were made and a lot of deep and / or funny conversations were had. Thank you, Frerk! Did I mention almost everyone had a room for his own in that gigantic house? That’s a rare, if ever, happening thing on a worksite. And speaking about work, because it was in the middle of the season I had a hard time finding skilled people to help with the concrete. So when it was time we had like 20 different people coming in three weeks, some of whom I’ve never met before and some of whom had never met concrete before. It was a real freak festival with changing people every week which didn’t make the work any easier. And I don’t wanna whine, but we really had some bad luck with a lot of things, including the weather for the most part. I won’t go into detail, but at points I got to my limits with organizing, taking care of things and getting enough sleep st night. Sometimes it felt as if all odds were against us, but as always, of course, in seven weeks we pulled it all off somehow. But what was supposed to become a chill project in my hood in the middle of the summer had turned into a nightmare at times, at least for me. 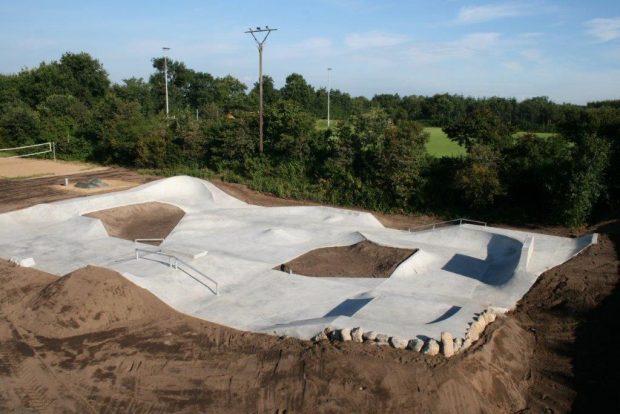 Everything brown is now green, of course…

It’s been a long time since I have felt such a relief on something when the project was finally done, when it was over. Now it was time to find out if all the sleepless nights of dreaming and designing were worth the struggle. Would the lines work, would the trick combos I had in mind be possible? You always only know that after your first runs in a new park you’ve built and it’s the best feeling when something that already looked good on paper turns out to work even better in reality. And the answer is a big yes, the park turned out awesome. It might not be my usual standard in terms of quality, but the design is fucking great. It’s a real flow galore and there’s something for everyone inbetween. Just have a look at the pictures, it’s really as much fun as it looks if you’re into high speed flow lines. Everyone is super stoked about the park (except Eyk maybe – get back in shape, bro!). The major and everyone in Hörup can’t really believe what they got considering what was originally planned, the kids themselves are beyond belief. So everyone’s happy, and that, of course, makes me super happy!

The ditch on the right is the park’s highlight for sure.

We’ve had some rad sessions there so far, but didn’t care about any kind of documentation so far. Unfortunately on the grand opening when I wanted to get some skate photos done most of my bros were out of town and the rest told me they didn’t know it was happening (yeah right, especially in this über-technologized world). So on that particular day there wasn’t too much going on and I can’t present to you any action shots at this very moment, so you have to settle with some boring overview shots, sorry about that! The weather forecast doesn’t look very promising at the moment and I have to leave to France for the last project of the season. And knowing my friends, I guess, there won’t be any photo sessions soon. It seems people are more into simple shredding over here which I’m totally fine with, except for when I wanna get some shit done and represent Green Smiley Crew.

Whatever, to sum things up, I can totally recommend this place to make it a stop on whichever road-trip you may hit. There’s plenty of new parks popping up north in Denmark, and it looks as if we’re gonna build the second half of the Glücksburg park next year. And I still try my very best that this won’t be the last time I can spread news about some new kinda d.i.y.-like stuff in our region, the little paradise between Denmark and Germany. On the map you find’ll Hörup in the middle between Flensburg and Niebüll. The park is located at the local sports centre (‘Sportzentrum’) next to the football field. And since the town pretty much only has one main road it’s all quite easy to find. It’s a quiet spot and perfect to spend the night at with a brand new BBQ area added there as well.

So there’s heaps of people I have to thank for the realization of this sick skatepark, I will concentrate on the main ones: Wim and Isabelle of Grünplanungsbüro Natur & Kultur for helping behind the scenes and mayor Karin Carstensen for trusting in us, letting us do and spending money wisely. Then there’s Peter and especially Michael from Hörup who were always willing to help out when help was needed, I can’t thank you enough, guys! Thanks to Art-Jan from Boogart Betonpoompen and the people at Kies Beton Krebs, and also to Yamato Living Ramps and Dirk Lücke at Studio L2 for helping out in the beginning. Cheers to Flower for the amazing 3D-graphics and double thumbs up to Frerk for being the best host we could have have asked for. Skal to all his friends who became our friends, too! And last but not least all my love goes to the team: Helge, Jakob, Finn, Bottich, Vincent, Conni, Pierre, Hahnke, Johannes, Baumi, Fabian, Felix, Todde, Tiggel, Felipe, Hauke, Kai and special guest Böller! Thanks for the dedication and hard work you put into this, it’s much appreciated to say the least. And I hope you had some fun in between as well….

That’s it, I guess, we’re over but far from out. Thank you, skateboarding, for another wicked adventure, I love you so much, I want you to die…. BOARDSTEIN forever!