Rio de Janeiro has a pretty good history on DIY spots… two of them, “Quadrinha da Lagoa” and “Duó”, became really famous spots, with lots of people skating on an everyday basis for years. Then, not too long ago, those spots became actual skateparks rebuilt by one of the best ramp building companies in Brazil, Rio Ramp Design (RRD).

It also came along with other pretty good new skateparks, all over the city. But still some skateboarders had the urge to build something that was more raw and pure, we also wanted to occupy the streets and public places. That’s always been a part of skateboarding in Rio, and we missed it. 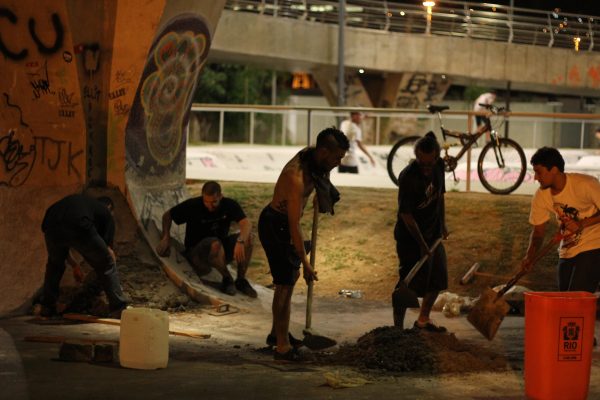 After a lot of talking over beers, smokes and sessions, we came up with a place that was the asphalt parking lot of a snakerun ramp that was being used mostly by wrongboarders. It was one of my reasons to choose that place! The skaters take over!

Within a couple of weeks we already had some wallrides and a barrier spine, then a box, a pole jam, a curved rail, transitions… all the construction days came with barbecue, beers and friends having a great time! For most, it was the beginning of DIY building and everybody got addicted to it! After two months we already had our own skatepark! We never had any kind of sponsorship from skateshops or brands – just from the skaters! Many materials were taken from old construction sites nearby so we could save a lot of money for more barbecue and beers! With every obstacle built we had an inauguration day the next few days! Our weeks are like this now: we usually build on Tuesdays and skate/party on Fridays!

We call our DIY: ZNAKESIDE!