If you didn’t already read part one about the beginning of the project:

Doing the downhill to Peyrat le Chateau I see the last few weeks passing in my memory: going back to Brussels because Pierre has to be back in Peru to build a park in Lima.

And after four days in my town, I return to the realization the amount of problems I had to deal with had grown since I was away. We came back with Ben to pour the cradle and the tunnel, not exactly what you call easy pieces, especially the tunnel, because the soup we have to shoot there is so difficult to stick on the over vert. Also, the rebar work that they made us do with ten mm bars that we had to embroider in such an intricate way, and then the big “flat” part that was anything but flat, to do with only four workers on the surface.

The cradle’s problem was more from the technique chosen by the contractor to have the junction so low under the ground around it that made it so difficult to clean the joint between the two parts: low and high. I can only cross my fingers in hopes that it will be neat, and i’ll only know in 10 days after the  concrete has cured and we can get rid of the casting.

Pain in the ass

I remember this week of the entire mission was one of the hardest, going full speed down that road with that cool wind around my arms, I remember how happy I was to see Ben shaping so well and so fast with those General Sherman radius floats that Soup made especially for this project: the perfect tools in the hands of a perfect worker… so happy I was.. and so tired also.

After that suffering week we had once again to leave for three reasons: 1) the rest of the preps where not ready, 2) Ben told me in advance that he could not stay more than one week, and 3) the most important of all: we had our ticket for the Shellac concert in Antwerp and we would not miss it by any means!!  Listen to that band and you’ll understand me!

As I’m spanking myself to go faster than a motorcycle on the road to Peyrat that I now know so well, and seeing the rider smiling at me trying to go so fast, I rethink my decision to go back even if the contractor could not pay me anymore, just because I don’t consider my mission completed until I try this cradle to check if it’s hell or heaven.

We had only two parts to pour, so no big deal (even if the casting of the cradle was a pain in the ass to scrape the plaster from the concrete) so I decide to take some days to discover this very beautiful area and I was right to do so since we met a girl that showed us the way to a small community living in a house really far away from the road. All of the people there were artists: sculptors, musicians, a tattoo man, and we spent some days jamming with all those people including  Sam, a great punk drummer. Those days were sweet and I made friends for life, but we had to leave for the last mission of the trip: skating the entire thing with the flat of the cradle. I discovered that there was a kink between the high and the low part of it but couldn’t figure out if it was still skateable and how it will affect the lines in that enormous cradle and believe me this is definitely the cradle of hell wanna know why ?

Come on the island and find out!  OK… OK it’s speed, its furious, the whole thing needs really good carving abilities and really big balls!! (remember that we did the best with what we had).

On my way down to Peyrat with the wind in my eyes I suddenly see a bird flying aside, he turns to me and sings: “you, fucker, don’t forget…” and just flew away, while following it in the eyes of its flight, I wonder what he meant by that, and then I suddenly understood: thanks to Pierre, Ben, Sam my mate, thanks to Nico, Xavier, Greg, Ced, Pascal, Theo, the workers, thanks to Nico, Loic, the contractor, thanks to François, the architect of L’Escaut, thanks to the Centre d’Art de L’Ile de Vassivière, thanks to Koo Jeon, the artist, thank you my mother for my body to be so strong to endure so much… and thanks to the Team Pain and naturally thanks to you the bird! 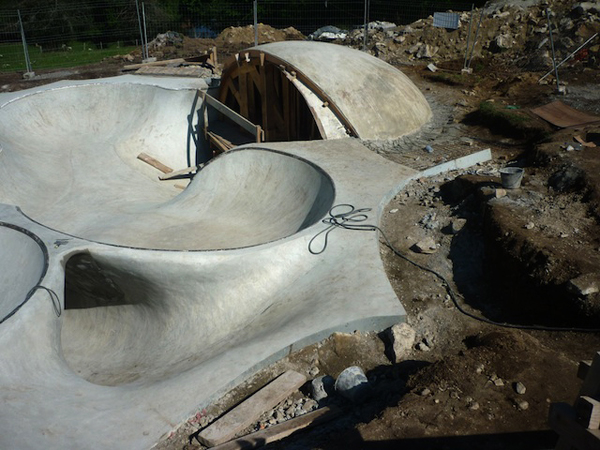 Mike. Singing in the Lighthouse.

At the deep end of the hill I pop my board in my hand, step in the car, turn my back on my way to new experiences, there is so much to learn on my way to the grave. – Mike

To read part about the earlier construction of the project –> Project OTRO, Vassivière, France (part 1)

Mike, your humble narrator, cruising the Cradle of Hell

Rumor has it, the island of Vassivière in France used to be used for Uranium mining. Perhaps that has something to do with this ominous green glow of the new skateable art project.

7 thoughts on “Project OTRO. Vassivière, France – The Cradle of Hell”