In early February this year, Jeremy, the owner invited the whole team Defocus Skateboards team to test the concrete. The bowl was just finished two weekends before, the pool coping adjusted, and a special product put on the concrete to clean it.

But when we arrived at the point to test it, it was so slippery! If we did a hard carve it ended everytime with a clean wipe out. A bit painful. So we spent two hours to brush and sand this fucking product that make the concrete slippery. Eight skaters working on the bowl was not too much.

Then we had a real try in the bowl, but it was still a btt slippery. Hard wheels weren’t possible. Even for Mickael who say “I keep my wheel whatever on any type of stuff I skate on!”

The neighbors treated us like friends. They gave us twelve bottles of wine for the party night. Perfect!!

After that weekend, it was a good test but we were a bit motivated to have a better session.

So we got the point. Just before this summer, we tried to paint the bowl to make it less slippery. And that’s worked pretty well. So we organized, with Defocus, a big party with many skaters to show the bowl to others.

It was the weekend of the 11th of August. We got skaters from all over France, from Paris, Marseille, Grenoble, Biarritz, Nantes, La Rochelle, Bordeaux… etc. A beer factory give us the beer for the weekend and we prepared all the food. The “Mad Men’s club” had the concert inside the house. Everything was ready to have a skate weekend!

Everybody arrived at the point, lost in Médoc, with the short information they got, by car, camper van, hitchhiking or ferry.

It was really something! Everyone was excited to skate this bowl. So after a short night session and BBQ till 2am, we finished painting the bowl and got prepared to have a long day session the following day.

We woke up Thomas, who slept in the bowl, with a cow-bell, to start thejourney. So here was a perfect day, some people skating the bowl while others chilled outside waiting for the concert. The summer was here. As we made the breakfast for about 35 people, the others put the beer on ice, and cleaned the bowl and everything else and got the space ready for the band who arrived around midday…. Then, it was crazy, hard rock and bowl riding fit really well together.

The neighborhood also came to see what’s happening in the old winery because they saw all the cars but especially when they heard the hard rock… it’s not normal to hear over there.

We got some special tricks that came out that day like the long frontside lip of Seb, the switch nose pick from Peter, the frontside flip of Wissem or even more, the crazy drop from the first floor of Yoan, a 3.90 meter high drop at 90°.

So yes, that was a good party.

But actually, that’s just the beginning of the spot, it’s going to have a snake run outside with three micro-ramps and so much other stuff… Skatopia is coming to France, lost in Médoc.

We are working on it, and we let you know when the next section will be done. 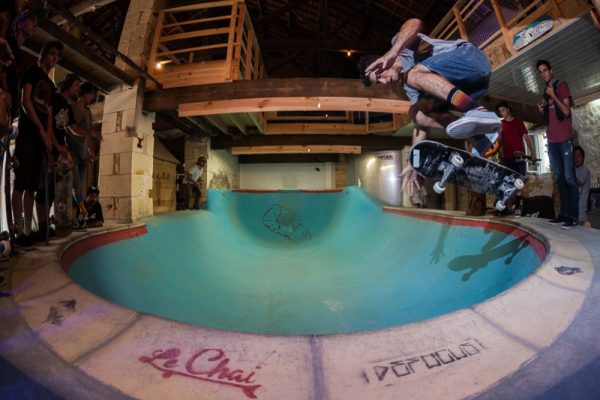