“On October 6th, we tried for the 4th time to have the Session in La Kantera organized by Skate Eskola. The children could skate the other part of the skate park, for two hours, but the rain started, and the organization decided to make some fun, for example the biggest power slides, the best trick in the ramp, etc.

A lot of people skated, like Sergio Cadena, Ian Campbell, Julen Arizmendi, Paul Tellez, Javi Txudo, Kako…. and more, but the rain made the pool session impossible. Next year we will do it again, hopefully without the rain!

Frontside smith grind on the extension going into the street course corner. 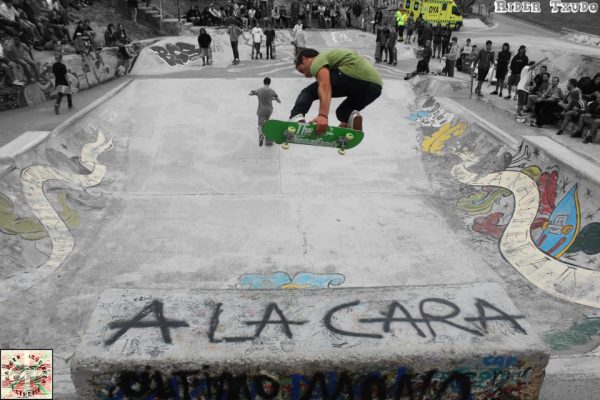 Grom fly out off the quarter.

Too bad the rain came and washed away any chances of a Pool Session….. to be continued with a metal ladder added a few days later.

The pool session was canceled, so the locals put some stairs up in the pool a few days later and had an “over the stairs” session, which can be seen in issue #6 of Confusion Magazine, but we couldn’t resist a little sneak preview.

A few days later, the sun came out and the locals put in a metal ladder in the pool for a new challenge!

For more radical stair action, you have to check out issue #6 of Confusion Magazine!