A DIY spot built by Baum, the Skateboardinitiative.do and the locals in the middle of the city of Dortmund, in Germany.

Sick stuff and its getting really big really fast!

Support the U-Topia! More updates this week… check back soon. And scroll down to the bottom to donate.

(translated from German from Utopia DIY)

“In the Dortmund skate scene, a certain place has been known for years: the Dortmunder U. Around the landmark meet, especially in summer time and again a variety of skateboarders. As part of the “Sommer am U” project, the skate school of the Skateinitiative Dortmund, including portable ramps, will be relocated to the Dortmunder U during the summer months.

However, this very day-by-day gathering of people also brought with it problems: the nearby restaurant owners complained increasingly about the noise and the wear of the public area. In addition, the event series “Sommer am U” can not take place in 2018, as a large art exhibition takes over the Dortmund U and its surroundings. So where is this summer …? The public skate parks in Dortmund are in the meantime meanwhile run down, a new building or even a repair of the defects does not plan in the near future of the city and the skate hall at the Keuninghaus remains closed in the summer.

Then on a beautiful spring day it happened. An employee of the city of Dortmund went to the U, watching the skaters and finally made them – knowing that these some residents are a thorn in the eye – a grandiose proposal: The area between the Dortmund U and the FZW could within a user agreement by the skaters to be used. The said area belongs to a larger group, but this would build the area only in just under one and a half years and we should build on the square on ramps, which we consider useful and good. 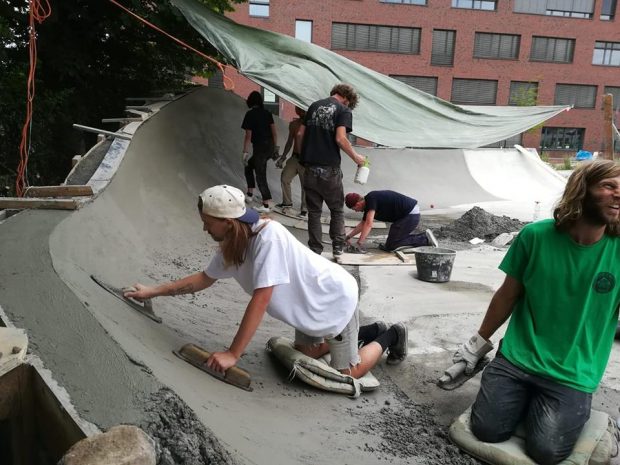 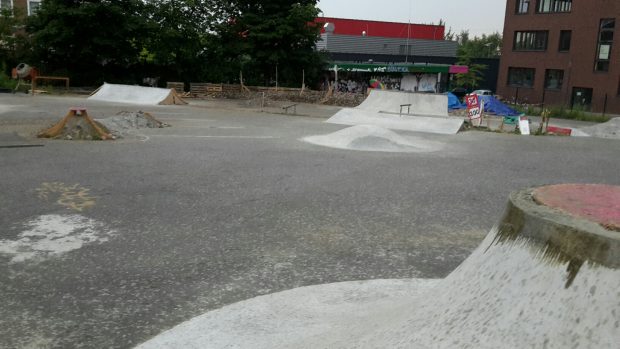 So the first official contact between skaters and the city of Dortmund was born. After the first meetings, it quickly became clear that the offer had advantages for all concerned – and so the contract of use for the vacant space between the U and the FZW at Emil-Moog-Platz was signed in a timely manner. Leading in these discussions was once again the club “Skateboarding Initiative Dortmund”, to which the entire Dortmund skate scene was already obliged to many thanks. Also in the coming time, the skate initiative will be responsible for the planning and organization of the large-scale project as well as its function as mouthpiece.

To avoid wasting time, the first meeting of local skaters took place on 14.05.2018. With about 40 people, the first plans were forged, tasks distributed and the first donations for the building material collected. In order to receive not only donations in kind but also donations of money, the boys and girls printed specially designed T-shirts, whereby the group additionally projected the project outwards.

Since then, the large group of interested, energetic helpers has combined a large number of talents: design, printing, texting, craftsmanship and planning skills come together through the various skaters.
The big goal of this heart project: to create a skate park and meeting place that is accessible to everyone and in which everyone can contribute their part. Not only skaters should be attracted with this area, but it should create a place that offers a wide range of leisure activities for all ages and social classes. The cohesion of the young, creative people of the city should be promoted and the community should continue to grow.

The big goal of this heart project: to create a skate park and meeting place that is accessible to everyone and in which everyone can contribute their part. Not only skaters should be attracted with this area, but it should create a place that offers a wide range of leisure activities for all ages and social classes. The cohesion of the young, creative people of the city should be promoted and the community should continue to grow.
To put it in a nutshell: We are driving the (skating) culture of the city of Dortmund forward!

For that reason alone, we depend on your help – whether sharing in social networks, building ramps or spreading the good news.
Help us to protect our spot from demolition by a large company. Get involved, join in, create something with us – on our beautiful U_topia! ”

Hence the call; brings Utopia DIY the attention it deserves and helps to build another pillar for skateboarding & culture at Dortmund U!