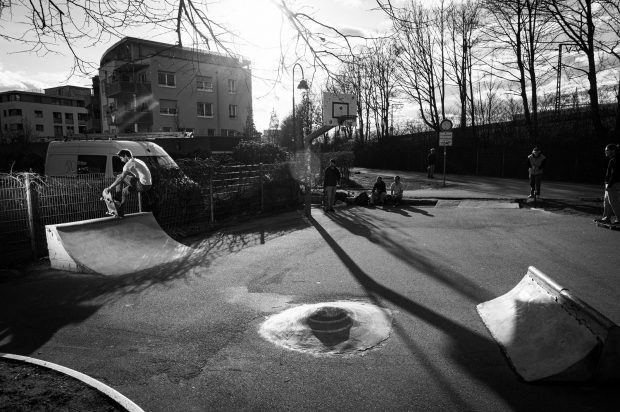 “I was pretty stoked about the idea of my friend called “Wursch” (Saarbrücker local Skater living in Karlsruhe). He called me and we spoke about the ‘reunion’ that takes place once a while of Saarbrücker locals – this time in the beautiful city of Freiburg im Breisgau, located in the black forest. The decision was easy and finally we found ourselves the upcoming saturday on the parking next to the Skatepark in FR. The park is new and legendary since it exists (one of the best bowls in the region and a really nice streat area ). It is located in a nice park surrounding with a little lake to cool down. Lots of familiar Saarbrücker faces, lots of OeTTINGER beer, beautiful sunny sky and the good old vibes you are used to where good people meet and know how to celebrate. The local frinds shredded as usual and we had a great time together. They organized some BBQ next to the pool as well as a nice sound and propper lights for the after-sundownsession.

At some point we turned the parking into a bar and a warm „little“ fre kept the good vibes uptright. Due to the opportunity to park a van easily we had no worries about getting home, being separated for Covid-reasons and were ready for the morning session on sunday. Sunday turned to be another day in parardise – while the session was a little afected by the leftovers of last night, a pizza-delivery and another BBQ made my day. Wurscht and me had to make our way back home again at some point. All in all it was a good combination of a trip into the past as well as beeing in the right moment.

Looking forward for the next trip dudes!!!”

“For about eight years, a couple of friends and I have been going on a skate trip for about a week around Easter time. Originally we wanted to go to Lyon last year but due to the pandemic it wasn’t that easy to go to Lyon. So, as so often since the pandemic, it was time to “replan”. New proposals such as Berlin and Hamburg quickly came up. Both great cities for skating and after the low year before (frst Corona year) everyone was on fre to go on tour again. A few days later came the message from Kaub, a friend from Freiburg, “… A night session is planned in the new bowl for the week before Easter…”. New plan, we’re going to Freiburg. As it turned out the best idea we had. Ben, Dingo and I arrived in Freiburg on Saturday afternoon. First stop was a small DIY skate park. The session was already in full swing and it was awesome how many people were there. Many well-known faces from Karlsruhe, Cologne, Saarbrücken and lots of locals. After a few hours we went to the skatepark in Waldpark Rieselfeld, where the night session was arranged. Within a very short time, the radiators were set up, the grill fred up, the beers in oververt possision and the session started. To describe the evening briefy “that’s escalated quickly”. No joke, after a few hours there was a big campfre. But it was a super successful start to the tour!

After a hard night, we all woke up one by one in our buses in the parking lot near the skatepark. It looked like a campsite at a festival. What have we missed such tours in the last year. In a large group we reviewed the evening and had a lot to laugh about. Throughout the day we all went to the skate park and had good sessions together. One of the highlights of the day was Timmi. Timmi came from Dortmund on the second day to hang out with us in Freiburg for a few more days. When Timi is there, there is always something to laugh about. The remaining days could only be good. Unfortunately, I don’t quite remember the exact procedures of the individual days. In any case, many of us went street skating in Freiburg on Monday. We started at a friend’s shop. From there it went from spot to spot. The craziest session was on really steep red metal banks. I remember Danny’s fs slasher, Timmi’s tailblock and Lox’s rock ‘n’ roll. It was really crazy how motivated people were after two hard days. One evening we went to a new mini ramp in a small skate park. The ramp was really awesome. We hung out there for a really long time. If the police hadn’t kicked us after dark, we would certainly have had a beer or two there. So we went back to the “camping site” to trink some more beer on the last evening. This night escalated so much that even on the last morning the cops came and they thought they entering a battlefeld. But the cops were kind to us and we had the opportunity to clean things up. After everything was cleaned up, it was like every morning, “Let’s go into the stream to wash”. Unfortunately, the tour was already over and after a few hours sober we parted ways again.

Thanks to the Freiburg locals for the night session and the tour through Freiburg, thanks to Sebb and Ben for the photos and thanks to Skateboarding.” 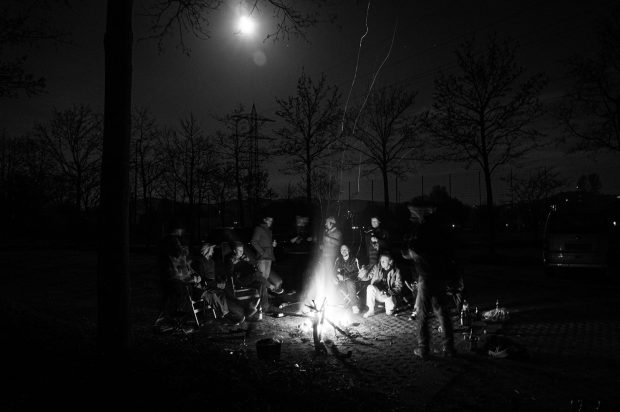 “Against the pandemic routine the Easter holidays became to a spontaneous cool skate trip to Freiburg. As birthday celebration surprise a dozen people of the Ü30 saarland crew went down for enjoying the weekend with skating, hanging out, grill & chill and also drinking on occasion to our friend Ugly Kid Kaub!

The f***ing highlight of the tour was the spotlighted bowl night session at the Dietenbachpark!

Great weekend with the crew!”

“It was just before easter, when friends asked me to join a small skatetrip to Freiburg with a few dudes from Saarbrücken. I didn´t really know the guys from there but remembered seeing them beginning of the century at the Wörthcups as the HZW crew. They impressed with there naked riders and other crazy funny things. So I didn´t hesitate a second and together with Stefan aka Wurst, former crew member and our driver, Dennis and Axel we started on Saturday to the vauban skatepark. Everyone was on fre and we had a great afternoon session with good tricks and tasty beers. Especially the diy elements made the park unique and really fun to skate. With the last sunrays we moved to Dietenbach skatepark. We settled next to the pool and while some guys were lighting the fre others were installing the lights for the nightsession. Beside our crew there were some locals from Freiburg and the atmosphere was awakening memories from the old Wörthcup days.”  – Manu

“Originally, Lars, Marvin & me wanted to go on a surf trip instead of what later should become the luserway trip. During the winter of 2020/21 we were hopeing that the pandemic situation will fade away by spring 2021. This did not happen, so we changed the plan to go on a skate/camping trip within national boarders. Our date was set pretty early, around eastertime (late march/ early april, 2021) we focused on going south, to gain as much sun as possible. Germany´s sunshine city #no 1, Freiburg im Breisgau, was pointed out. Not just because of their sunny weather & fresh skateparkextension, containing a mirrored replica of Arto Saari´s backyard pool, but also because of their beautiful landscape, located in the south of the Blackwood forest. bzzzzzzz…. fast forward… a lot of people decided to go south on this very weekend. The big gathering happened at the Vaubaun DIY (rip). Saarbrücken, Karlsruhe, Cologne, people arrived with their vans and tents from all around, even Timmi Schulze made it down from Dortmund all the way! For the next couple of days our camp was set on theDietenbach parking lot just next to the soccer felds. Some of us, ?somehow¿ made friends with the local facility manager in charge aka Hausmeister and he allowed us to do campfres on the parking lot. He did not knew how the HZW crew is freing up… I left the site for a night to take a breath and join Lars & Marvin to do some hikeing in a Freiburg suburb, at around 1000m above sea level. Up there was some 30cm snow left! It was the complete opposite tour and i enjoyed it. The next day we were back in the valley and joined the maniac parking lot skate action for another day or two. Some sessions went down in the skatepark and a mellow miniramp located nearby. Bit by bit everyone said goodbye. To sum it up like Danny from Saarbrücken: “…this was a once in a lifetime crew… all those diferent people never got together before, nor might ever join again in this constellation…” After everyone was gone, I enjoyed myself at some of the beautiful lakes around Freiburg before i drove to heart of HZW to join back with Danny & Co for the upcoming weekend.

Thanks to everyone involved, thanks to the super friendly Freiburg locals, thank you skateboarding & thank you Confusion for running the article.”