Words and Artwork by Haani Jetha

The idea of detritus and salvaging cast-off objects is also a conversation with my own history of growing up in Asia and experiencing Chinese culture closely as a Muslim of Indian ancestry. Navigating the complexities of such a cultural and spiritual heritage, I find myself looking for new ways of expressing old stories and of being in the world.

I turned to discarded skateboards to convey these stories. Objects of mobility that have taken me to many of the places that I have been inspired by and continue to return to. Objects that are sourced from college skateboard clubs, friends, etc, that express other people’s stories. Once discarded, they become objects with no visible map and capable of redemption. I began by sanding them down to resemble a blank canvas, retaining some of the original cracks and burrs.

The piece, titled “tonight my window casts jade // green onto pale snow” depicts an intense green palette that suggests life, with the board itself embodying life’s perpetual motion. The piece also communicates my fears for the planet. The spaces offer sanctuary and convey impressions of a Chinese landscape”.

2. do not ask for forgiveness 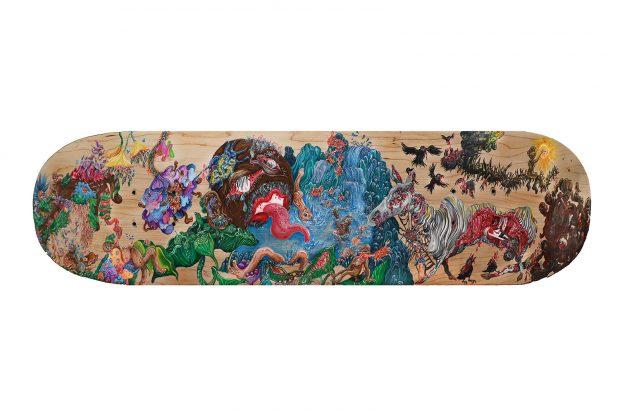 “do not ask // for forgiveness” features a macabre garden and the fruits and consequences of our actions. It conjures a hallucinatory Eden – similar to Bosch’s “Garden of Earthly Delights.”

3. Nature Morte: All was Alive

“Nature Morte: All was Alive” is arranged almost like a still-life painting. The juiciness and rotting of the same fruit that sat in my room for days made me reflect on time and transience and also on boundaries. I tried to extract and spread the colours of the display of tropical fruit before the dense background black and insect life absorbed it.

4. Infinite Possibilities: Inside This One, There Is Another World

“Infinite Possibilities: Inside This One, There Is Another World” captures the intensity and claustrophobia of life in Hong Kong. Typical scenes with twists, depicted as if on a hanging scroll, spill over and even blend into one another. The confusion and multiplicities annihilate any sense of self. The open sky is a counterpoint to what happens below. The mountains also offer respite from the exhausting minutiae and rhythm of city life. So much of life in Hong Kong happens on the inside but I’ve spent most of it standing on the outside trying to capture it.

My focus is not simply on texture and repair but on disruption and possibility. Maternal figures loom large and repetitively, provoked by the brokenness that surrounds me. Voyages veer into deep unknowns and fantastical landscapes featuring strange and often disturbing creatures. The search for nurture is also enduring.