With the eighth issue of Confusion Magazine finally at the printers and a week to wait before it is back from the press, it was time to take a little break from the computer and get out of the city, or country, for a little winter skate or surf road trip. Taking into consideration the weather conditions, train or driving times, semi-promising surf conditions and costs, I came up with four options, within a two to five hour drive from Cologne, Germany.

I was originally thinking of making a solo trip, but I threw the offer out to my friend Tobi Hees aka Käptn Neptun, and he was in for a spontaneous adventure. The Käptn don’t surf, so option B was out the door. A five hour drive to the new peanut bowl built by Concrete Flow in the coastal village of Mers Les Bains, in France seemed somewhat exotic, but with reports of zero degree (32 f) weather and strong northerly winds, driving five hours to a possible wet bowl and stuck eating moules et pommes frites all weekend also seemed like too high of a risk to get skunked… Instead, we figured if we went to Amsterdam for sure we could get skunked, but the drive was shorter and an evening in Amsterdam is always guaranteed fun times, and at least we would have a chance to skate the M&M pool, although all reports indicated it hasn’t been skated in months and would be wet and unskateable. We would follow that up the next day with a guarantee of being able to skate in one of the biggest wooden skate halls around western europe, at the AREA 51 skatepark in Eindhoven. With the destination figured out on Thursday night, a few emails later we had a “bed & breakfest” to stay in for the night, direct in the center of Amsterdam and only one block from the red light district. Camera gear, skate stuff and a change of clothes packed, we were ready for a mid-day departure on Friday morning.

AMSTERDAM:
We arrived in Amsterdam shortly after sunset after a three hour drive. We parked the car at the NSDM wharf where the old skatepark of Amsterdam used to be located in one of the hangars. Unfortunately for the skaters of Amsterdam and any visitors, even though they receive no government funding and pay their own rent for the hangar, their contract was terminated and the park was closed a few months back. About two years ago a new “backyard pool” style bowl was constructed in the parking lot. We didn’t know exactly where it was and being dark and cold, we hopped on the free water taxi ferry for a ten minute scenic cruise across the water way to Central Station. After a five minute walk we arrived at our hostel, 3rd Floor Rooms, in the heart of Amsterdam and were greeted by our host and notorious local Amsterdam skater, Christiaan Larsen. 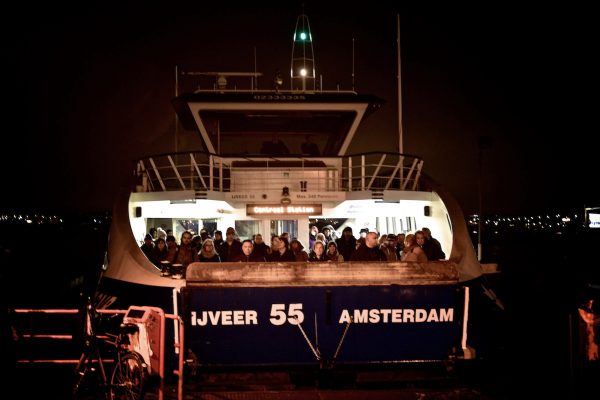 The water taxi takes you from the parking and the location of the now non-existent skatepark of Amsterdam, but also the new M & M backyard pool DIY bowl, to the Central Station of Amsterdam 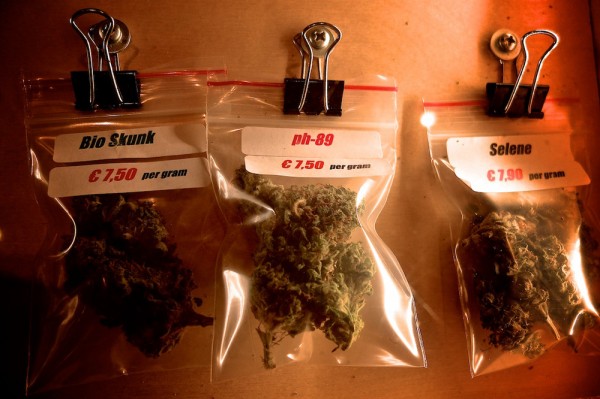 Decisions to decisions.  Amnesia Haze and White Widow were the final selections.

The red light district of Amsterdam.

Christiaan took us to one of the better coffee shops and like kids in a candy shop, we bought some “coffee”. It was a nice day for some White Widow. Then to the supermarket for a six pack of Grolsch, a burger at the Burger Bar and then back to the B&B (which incidentally is just a B, as in, Bed sans le Breakfast), but a great place to stay for a night or two, close to everywhere you would want to walk to for the full Amsterdam experience. I called up my friend Stan, european skateboard contest MC, and we went out for a few beers at different bars around the city, ending up at a punk bar called Cafe the Minds until close.

The next morning we cruised around Amsterdam for another hour or two, hit up a café for a bagel and a couple coffees, and headed back the way we came, with the water ferry back to the wharf with the plan to at least have a look at the M&M pool and check if there would be any possibility to skate it. We found it in the middle of a parking lot, a raised brick structure with stairs and you can’t see the bowl until you climb the stairs. As luck (and bad luck) would have it, the bowl was wet, with mud, garbage and broken bottles in the bottom of the deep-end a small puddle in the shallow end. The wind was howling and the temperature cold enough to numb my hands after taking photos for 20 minutes… of Kätpn Neptun cruising the deep end and getting a frontside slasher on the side wall. I was very impressed he motivated himself to skate (I did not), and not fall on the broken glass or slip out in the puddles in this fairly gnarly concrete bowl. Mission accomplished, one photo / trick in the M&M pool and we were on the road to Eindhoven to stay with friend and contributing Confusion photographer, Nicola Debernardi, who is the in-house photographer at Area 51 skatepark which is ran by Jeroen Sars from 100% skateshop and a bunch of other local Eindhoven ripping skaters who are also really mellow dudes and always down for a good time, on or off the skateboard!

We found the M&M bowl, not really skateable, but skateable nevertheless. 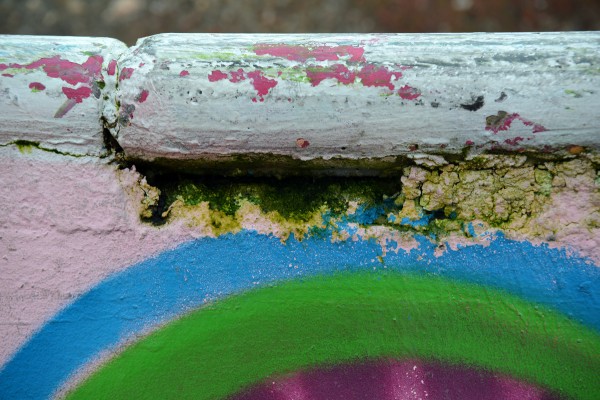 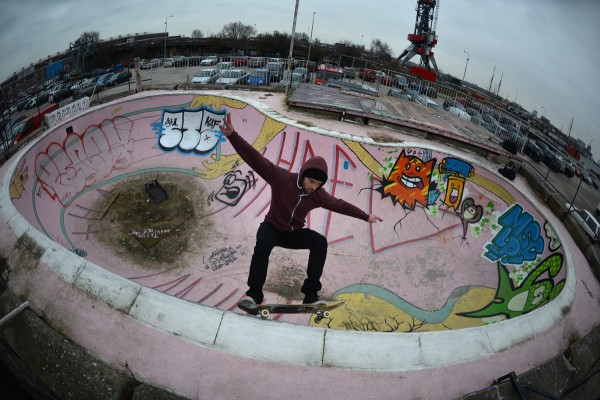 Overview of the M & M bowl with Tobi Hees frontside slash grinding from the deepend into the shallow. 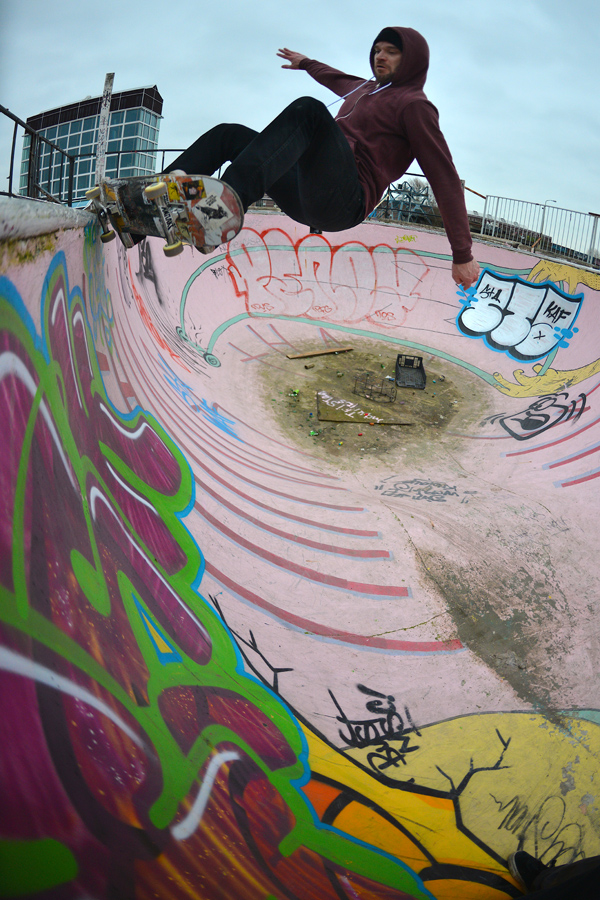 We arrived in Eindhoven around 6pm, dropped off the car in a parking lot and our bags off at Nicola’s house downtown Eindhoven, and headed on bikes to the Area 51 skatepark. Slushy sleety rain was coming down as we got close to the park. When we arrived, there was already a session going on with some of the locals, a couple skaters from Liege, Belgium, and a car load from Dortmund, Germany. Session was on, we skated, filmed and took photos until 1am, had some beers in the skatepark bar with the locs and then a quick camera bag drop off and direct to a punk rock pub we called La Folie owned by this classic rocker dude – totally legit. Then one more bar and back to Nicola’s for a small afterparty. Someone called the beer taxi and Nicola, who originates in Italy, made his world-renowned (by traveling skaters at least) pasta dish, this time with orecchiette and pesto! The beer taxi lagged and by the time they got there I was already asleep on the couch. Another burger the next morning at De Burger and we hit the road, one and a half hours back to Cologne, exhausted, bruised, with smiles on our faces from another incredible weekend skate holiday. Thanks to Christiian, Nicola, Stan, and all the Eindhoven skaters. Don’t be scared, it doesn’t cost a lot of money, get out of town, the adventures await. 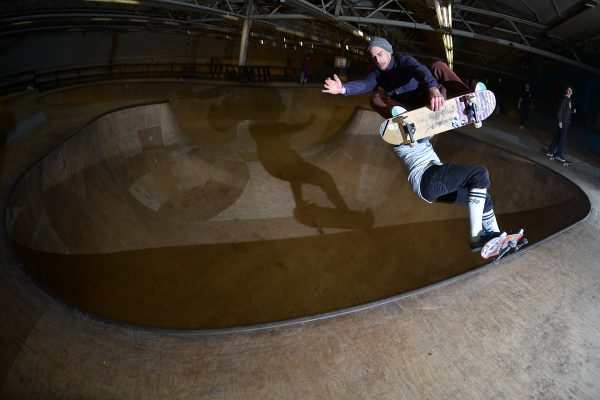 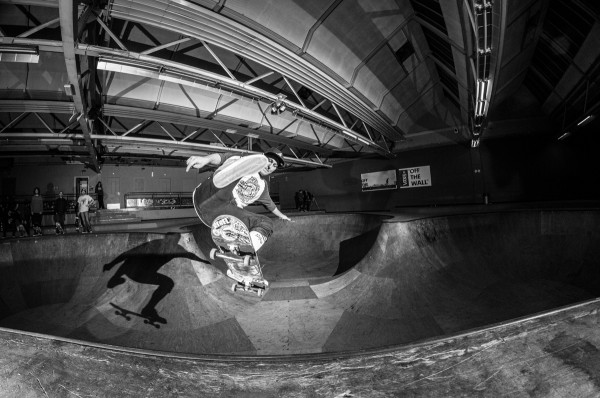 Nick Bax. Up the hip into a back smith.  Photo: J. Hay 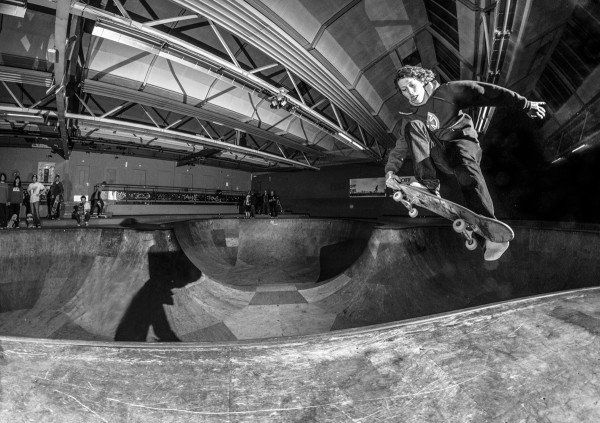 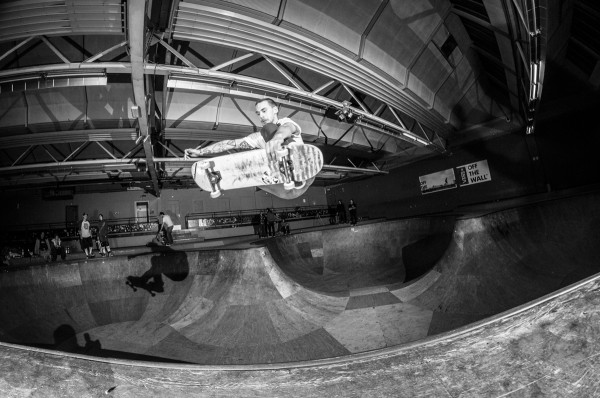 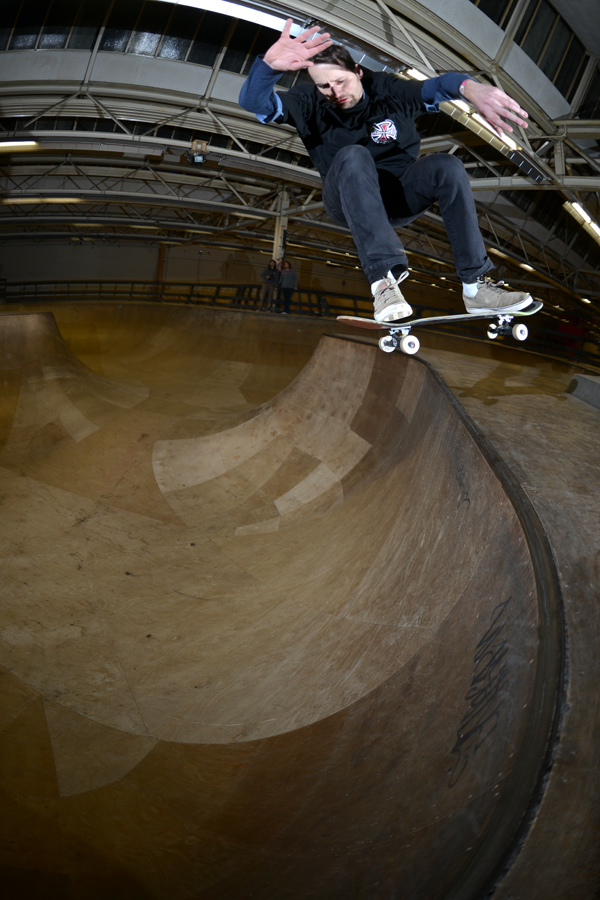 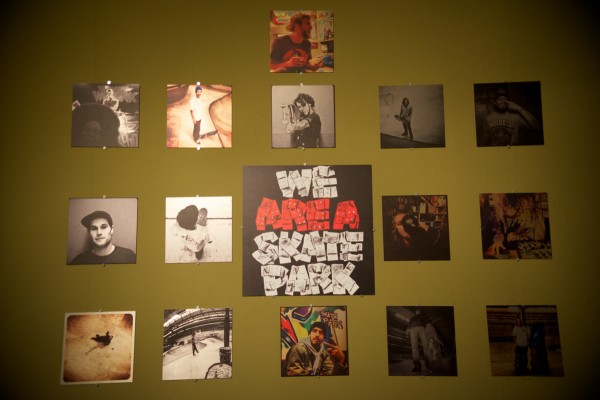 Nicola Debernardi’s photo show at the entrance to AREA 51.

Street beers in Eindhoven, on the way to the bar. Käptn Neptun, J. Hay, and Dave Katz. Photo: Nicola Debernardi