One of the best things about skateboarding is how, even in the middle of a desolate expanse of desert at an abandoned pool, you can meet a group of skateboarders who begin as strangers and end as good friends. Those who have been there know that the unmarked, unpaved road to the Nude Bowl is not easy to traverse, especially not with a sizable group stuffed into Andiey Lerma‘s front-wheel drive Chevy Impala. On a mission to film a few clips for Nic Rivera‘s upcoming skate video with Cyrus Read, we arrived at the Nude Bowl to find Raymond and his friends there in the middle of a camping trip. The bowl had been freshly painted the day before with a full cosmic mural by Jackie Danger, serving as an epic backdrop for the ungodly amounts of stoke that would soon follow, as well as a tribute to our recently fallen brothers: Jeff Grosso, Joe Hammeke, Sasha Steinhorst, and Jonas Wray. Each group took turns grinding, slashing, rocking, and ultimately lighting up the bowl until our group and their group had become one indecipherable mesh of skateboarders and homies, exactly the way a great skate adventure should be. 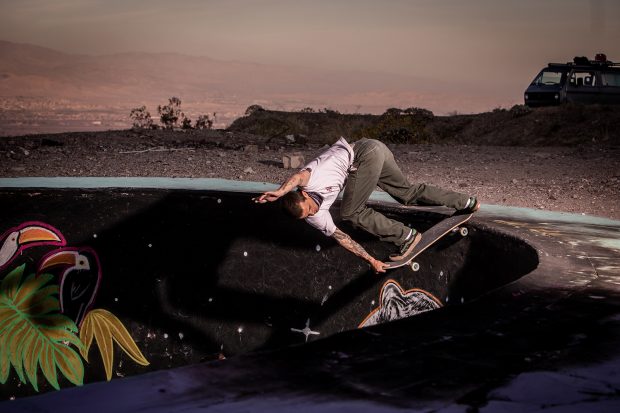