Well, I guess, it really is about time to tell a little bit about our 1. Happy Weekend in the skatepark of North Germany’s Glücksburg because even sad stories need to be told. After two years of Covid this was supposed to be the grand opening of the park which got concluded during the fourth built in the summer of 2020 with about one thousand more square meters of concrete including a deep bowl and a wicked pumptack around the park.

Some of you might remember that the event was originally set for the last weekend of May, but was cancelled last minute by the local authorities who didn’t give us permission for the lack of a security concept. We then agreed to postpone everything to the last weekend of August, and that’s actually when the real drama began. To keep a long and depressing story short, the whole event almost got cancelled a second time because of some bloody monster working in the city council and giving us the hardest time to organize and realize what was once supposed to become the first of a yearly skate event to celebrate this sick skatepark.

This is Ado from Hamburg who came and silently ripped his way into 3rd place bowl, this sweet backside ollie over the channel was part of his routine. 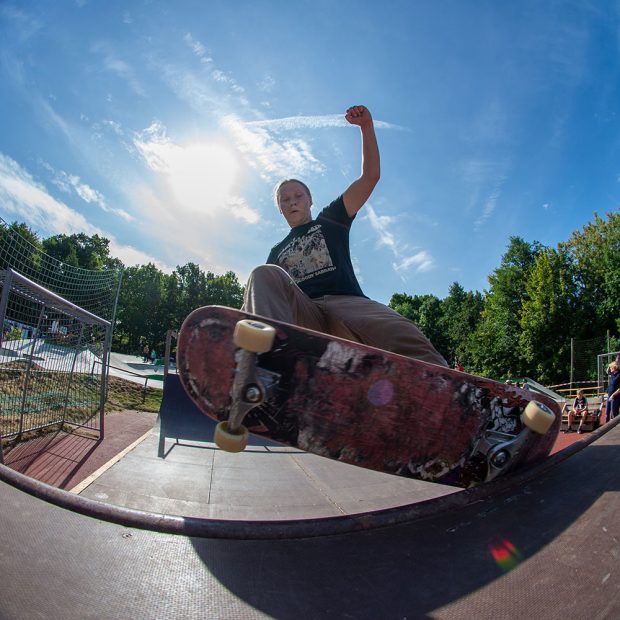 Local Mick Wollesen took advantage of the miniramp from the Wilwarin Festival that we had set up for a miniramp-jam that wouldn’t happen. Frontside grind for the books… 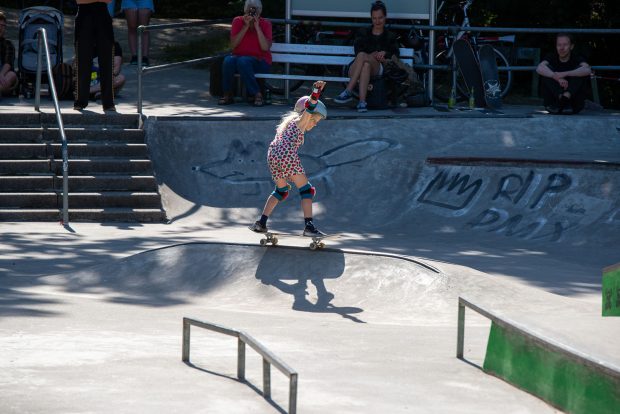 Little Ida from Hamburg was by far the youngest starter in the Under-18 street division but at eight years old she could handle 50/50s across the spine like the best of them.

Tjark Damerius from Kiel is no stranger to the park, but this ledge was brand new and part of the first spot for a 50,- euro best trick contest. He pulled a nice backside tailslide, but didn’t make the cut…

So we got permission basically last minute and that included a mass of ridiculous rules and requirements which were way too far fetched for a small skate event like we had planned, but what can you do? We already had pumped a good amount of money into the whole organization (e.g. for 250 shirts sporting the wrong/old date) and agreed to pull it off nevertheless.

A key moment was that a couple weeks before the event we had to find another security company to take care of the spectators and everyone camping out on site next to the skatepark. That was one of the mandatory requirements by the city, along with a good 20 toilets, two emergency exit routes, medics, fire brigade and the likes.

Well, as it turned out on the day of the event this particular security company turned the odds against us, their client, but that was just the icing on the cake. The main problem was that we had prepared an event for about 500 to 1000 people, but over the day in total way, way less showed up with starters for the contest being the absolute minority. And that came as a big surprise.

It’s not that we didn’t do any promo, the insta channel was working all the time, we had put up posters all around northern Germany and even Denmark which is really close by. And to top it all we had gathered 3500,- euros in prize money which, I reckon, is quite a bit for a little local event and pretty rare these days outside of the world of mainstream events.

So I really would have expected that way more people would take this as an opportunity to check out this sick (though for most german skaters far away) skatepark, have a session with like-minded people and maybe win 1000,- euros for first place bowl in between. But guess what, there were only six starters for bowl and all in all only about 30 skaters competing for the ten best trick contests, highest ollie and the death race. We cancelled the mini ramp jam completely because the guys from Münster who were supposed to be responsible for it didn’t show up either.

So with not too many people in attendance and buying drinks, food and whatever we offered for a donation we had to reduce the prize money a little bit to not lose too much money all together while literally making none (by the end of the day we had sold about 20 shirts). The only real success was our big raffle with over 550 prizes, thanks again to all the companies who had donated heaps of stuff for that.

This is what you get when you graduate Bryggeriet skate school in Malmö, all terrain rippers like Soeren Noe who did at least five amazing tricks during the best trick contest on the volcano. This Switch 360° Slob Air to flat being one of them…

Shorty is arguably Flensburg’s oldest skater and his beanplants in full knight gear are always a sight to be seen.

Our buddy Lauritz Hinrichsen won the best trick on the camouflage bank and therefore 50 bucks with sweet moves like this frontside heelflip and a trollie to fakie.

Best trick on the wallride was definitely a highlight and, of course, a crowd pleaser. Jonas von Bünger aka Ginger was leading the top with tricks like this frontside nosegrind tailgrab.

Flower joins in on the wallride with a blunt nosegrab fakie for warm-up.

The other highlight was, of course, that we were able to witness some great skateboarding that day especially from the three young danish rippers who had already shown up on Thursday together with Sascha from Switzerland who later joined us on the build of the new park in Handewitt 20 kilometers west of Glücksburg. All four of them annihilated the park and shit like that was exactly the reason why I had originally started this event in the first place, to show all the clueless hillbillies that I call neighbors some professional skateboarding first hand. But I would have loved it to be way more of that, and I was not really disappointed, but more just surprised that only so few people showed up.

I mean, how much more do you have to but on the plate to get folks off their couches on a sunny summer weekend in what is arguably one of the best skateparks in Germany? Well, seems like it’s the same issues everywhere being it parties, live gigs, art shows or normal nightlife. You hear complaints about missing participation everywhere, two years of Covid really seem to have numbed society which I am basically totally fine with, but I didn’t think this would include us as skateboarders. Just to sound like Mike Ness here: I was wroooooooong…

Hinnerk Petersen did a great job announcing and some Jersey-style backside tailslides in between breaks.

Winner of the Caramba Highest Ollie Glücksburg 2022 and 200 bucks richer is Tjark Damerius with some 80 centimeters plus. Highest Ollie is always fun for the crowd, go and do your own one!

You could call this a switch gaytwist or frontside nollie frontside grab revert just as you please, one thing’s for sure, Soeren Noe fucking rips on a shred stick.

During the bowl contest Ginger pulled out some runs that surpassed one minute by far on a regular and you can put a lot of tricks into sixty seconds in this tight bowl. Sick ass  frontside nosebone to first place, the crowd was stoked for sure.

During the finals Flower aka Florian Fentzahn pulled out this frontside nosegrind in the deep end first go, that’s some serious pro shit right there.

Sascha Conca from Switzerland has been residing in Kopenhagen for quite a while now and showed up with the other Danish beasts to tear our bowl a new one. Backside smith grind during the heaviest session so far.

The trick that won the wallride was this frontside invert by danish ripper Björn Lillesoe. Skal, kammerat! Photo by Jonn Rübcke

The prize ceremony and the torches that ended the event, at that point we could have cared less.

Thirty years back, this was a usual sight how skate contests were put to an end. Looks like in Glücksburg time stands still once more and people lay in gutters just like back in the day… Good on ya, Daniel!

So to finish this off, when it was time for the prize ceremony we lit up three torches that served as trophies for 1st to 3rd place Bowl. Security stormed on us to put them out immediately since the fire brigade had already left, but we were in the middle of a concrete skatepark with a fire extinguisher right next to us. So I told them to fuck off and five minutes later about 20 cops showed up out of nowhere (definitely waiting round the corner for some mayhem) and shut the whole event down. Well, we were kinda done anyways, but would have loved to sell a couple more beers into the night…

So much for our 1. Happy Weekend in Glücksburg, and I don’t wanna whine and will spare you the details of the aftermath, but once the dust had settled I, as main organizer – who had said from the very start he will pay for all expenses that would occur – had dumped a good ten grand into this event. So guess what, we won’t do another Happy Weekend in Glücksburg anytime soon, but maybe next spring in the new just as sick skatepark of Handewitt west of Flensburg. Just because…

An article about this new park will soon follow on this very channel and now please enjoy the pictures and skip to the next post, because this one sucks. Big time thanks anyway to our sponsors Irieddaily, Poler, Caramba and Koloss and the few people who helped out to make happen the very first and most definitely last Happy Weekend in Glücksburg! And a big ‘Fuck you’ to Bela, who used to be a good friend and is now living proof that alcohol can ruin any friendship and turn decent people into clueless dumb fucks. Rest in pieces, you cunt!

I hope, next time there’s better news from our tiny little paradise on the most northern tip of Germany. This has to do for now, sorry about that and happy skateboarding!