“The park was built in the end of 2014 as a collaboration between Philadelphia Skateboards, Make Life Skate Life and ALIS.

Since 2016 we’ve been hosting free skate classes at the park for the local kids, ever since then the program expanded and we started collaborating with local NGOs that work with urban refugees to bring them to the park and give them free access to skateboarding. Jordan is the among the top ten countries in terms of number of refugees hosted, which is huge considering how poor the country is. In addition to the local population the city of Amman currently hosts people from Palestine, Iraq, Syria, Yemen, Sudan, Somalia who have moved here due to conflicts in their own countries, in addition to people from Sri Lanka, Bangladesh, Ethiopia who moved here for economic reasons.

Despite all of this, the city is seriously lacking in public spaces. So having a park such as the 7Hills skatepark where children from all walks of life and their families can come and enjoy a day in an undiscriminating space where they have free access to skateboarding is a tremendous addition to the city, not only because of the ease of access but also because we’re using skateboarding to break down gender, socio-economic and religious barriers.

7Hills – How volunteers built a skatepark in 18 days

In 2019, we aim to host skate sessions for at least 8,000 children and their families and provide access to one of the few public spaces in the city. The cost of a skate class per child is €1.25. So, to make sure 8,000 children from Jordan, Syria, Palestine, Iraq, Sudan, Somalia and Yemen can participate in our program, we need a budget of €10.000.

Please help spread the word about our fund raising campaign. We’d be very stoked on your support.”

You can find more info at www.7hillspark.com
Donation page:  www.7Hillspark.com/push-7hills/

I first contacted Arne Hillerns of Make Life Skate Life last April. I’d seen photos of the park they were building in Bolivia and wanted to get involved. It turned out the project was almost finished, but it got me thinking about Jordan, where my friend Kali Rubaii had been working on her Ph.D  fieldwork in cultural anthropology.  She had been telling me for a while how the kids there could benefit immensely from having a skatepark. We emailed Arne and the three of us started planning the project. Kali had a preliminary meeting with some city officials and it was pretty clear they were on board, so Arne and I booked flights to Amman and met there in September. 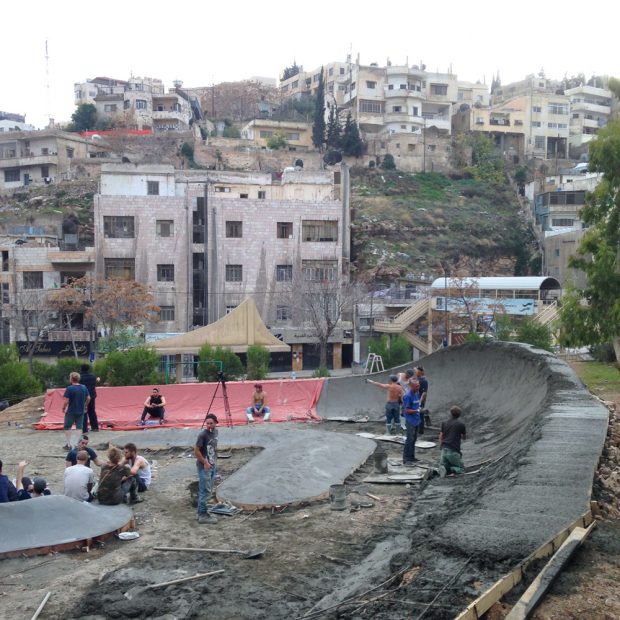 Amman is an amazingly skateable city. Hill bombs for days, marble spots everywhere. It turned out there was already a skatepark that had just been built in the outskirts of the city. The day I arrived, I met up with local skaters Tamer and Alex who took me there. The park was pretty sketch, built by some contractors with zero skatepark experience, and so far removed from the city center that it’s only accessible to a small portion of the community. On top of that, it was most often overrun by gangs of little punk-ass roller blader kids who would throw rocks at you while you skated. It was clear that something quality needed to be built, by the community, and accessible to poorer neighborhoods as well as the existing skateboarders. One night walking home with Kali from downtown, we passed exactly the right park.  Although slightly inclined, it was the flattest park I’d seen in Amman.

Arne flew in after I’d been in Amman for two weeks.  The day he flew in I was able to secure a meeting with a seemingly high on the food chain city councilman named of Hussein Alharassis. We scrambled to put together a presentation. He was stoked on our idea and was able to get permission from the mayor.  Then we started fundraising.

Arne and I teamed up with local skater Mohammed Zakaria to come up with a fundraising plan (Kali had gone to Iraq to distribute medical supplies). We came up with the name 7Hills, and decided to crowd-fund the project on Indiegogo.  We put together a budget, set a goal of $18,500, and went for it. Long story short, it worked.  With the campaign money, fundraising parties in Mechelen, Belgium and Amman, and a few large cash donations in Amman, we raised somewhere around $27,000 in 6 weeks. Game on. 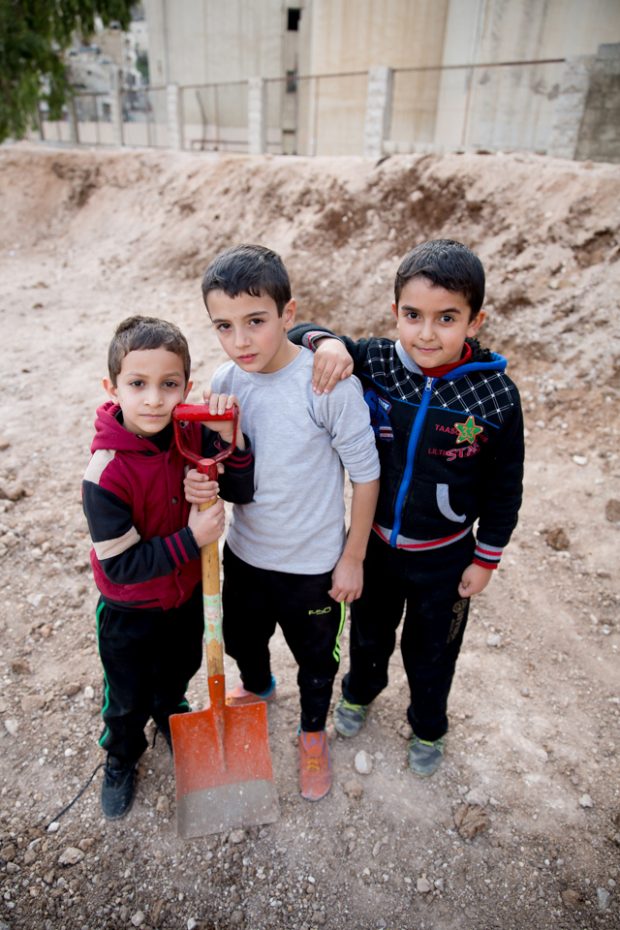 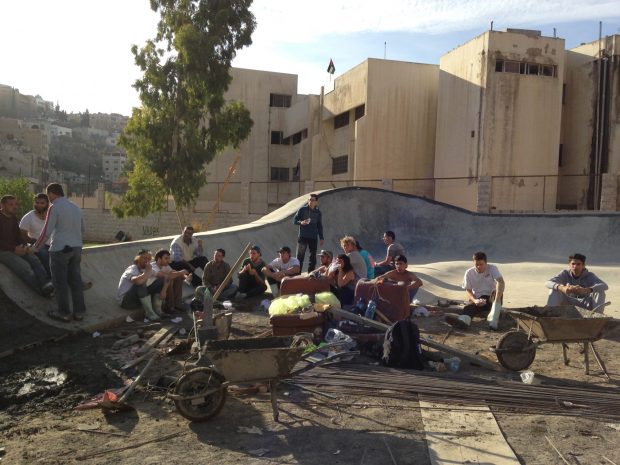 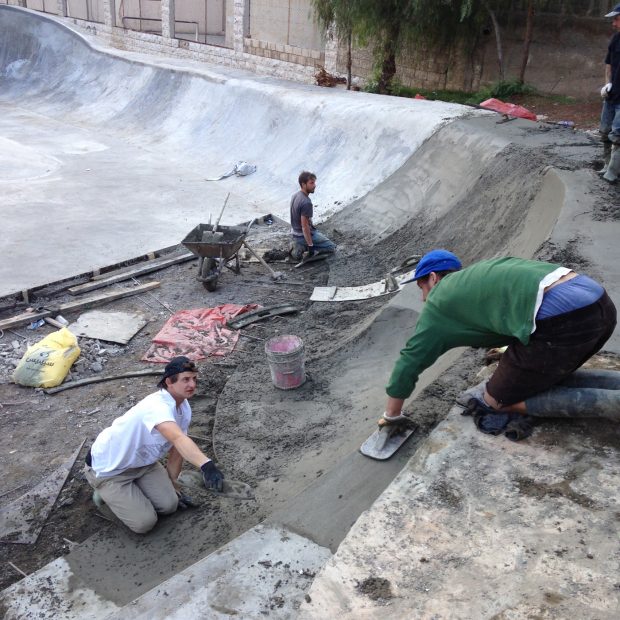 We were able to get 15 people from Europe to come help with the park, and along with the local and expat skaters living in city, we had a solid crew. Headquarters was a huge three-bedroom flat up the hill from the build site that housed most of us, with a few people staying at Polish skater/Royal Jordanian aircraft mechanic Kamil’s apartment.  The Danes had their own place in the outskirts of the city that I never made it to.

Once construction started at the beginning of December it was non-stop, frustrating at times and physically exhausting. Concrete was always late, usually coming at around 2pm when scheduled for 9am, and had to be wheel-barrowed up-hill since the trucks couldn’t make it through the mud to the build site. A few times they just dumped it over the wall from the road above.  With fresh concrete usually only getting a few hours of sunlight, many nights were spent on-site finishing concrete past 2am, and often given a last pass early morning the next day. 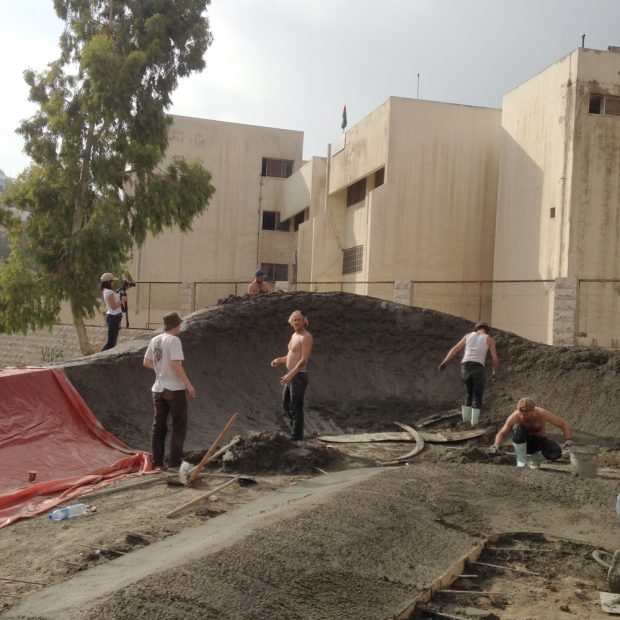 The last day was a flat-pour marathon, but somehow we got it done. We ended up building a 600+ square meter skatepark in just 18 days. We had volunteers from the US, UK, Belgium, Germany, Czech Republic, Poland, Denmark, Australia, Egypt, Syria, and Jordan, maybe others. It was amazing how many local kids, as young as six, were involved with construction from start to finish.  It was so rewarding to see the kids skating and enjoying the park they helped build on opening day. Kids that had never seen a skateboard are now ripping every day. It’s crazy and it’s beautiful. I can’t wait to see this new generation of Jordanian skateboarders flourish. 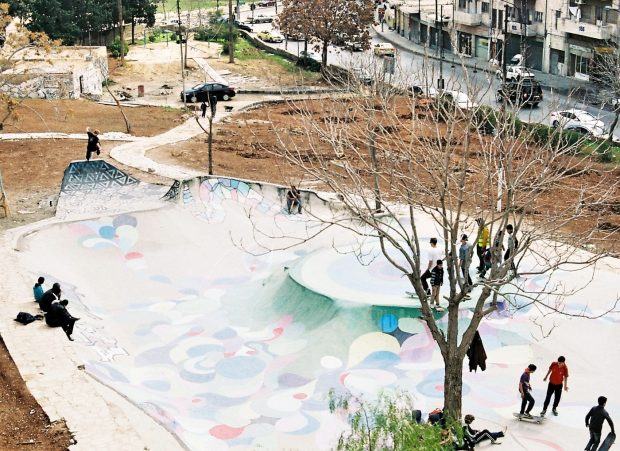 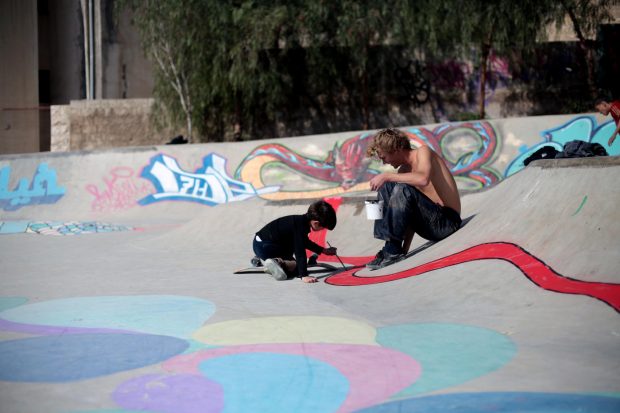 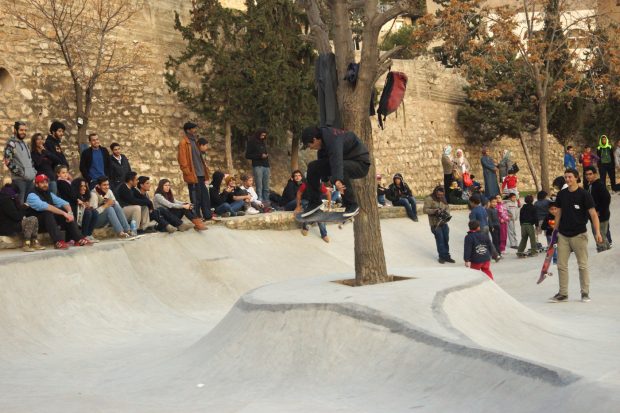 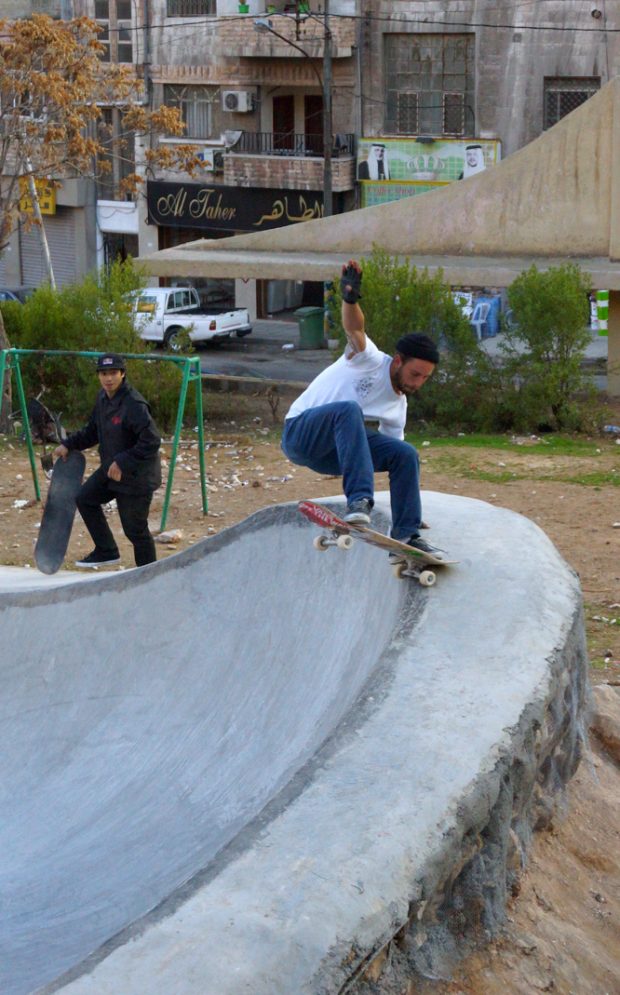 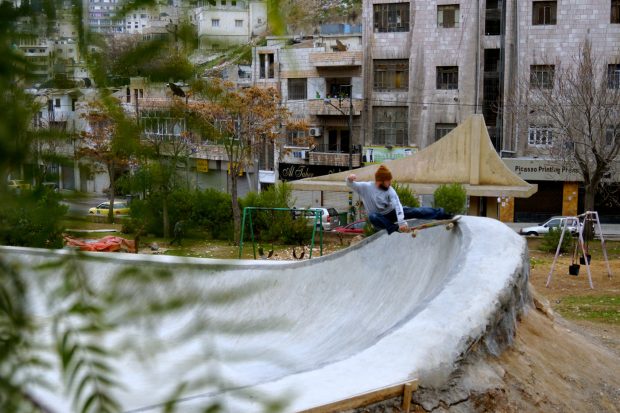 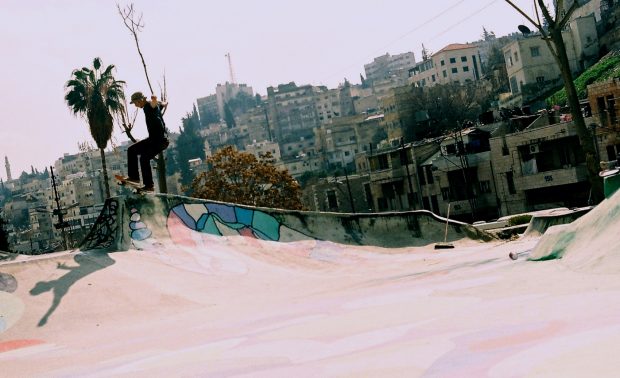 For more information on the 7Hills Skatepark and other Make Life Skate Life projects, visit www.makelifeskatelife.org.

To make a donation go to: www.7Hillspark.com/push-7hills/

Or get a copy of the print issue here.