These days I’m not really that into going to contests that much. You’ve seen one contest, you’ve seen them all… But since I was already on the Northern coast of Spain with friends and family two weeks before the contest, driving two and a half hours to Basque country to the raddest set up of a skate park in the world, I didn’t have to think twice. The last time I was at a contest in La Kantera it wasn’t so much a contest but more like the name implied “POOL PARTY 2006“. But that was much different – almost all the skaters were from Basque Country or somewhere around Spain, bands were playing “pool side” and there weren’t any major sponsors. Eight years later, things were somewhat different, although the soulful and rebellious spirit of the Basque skaters and spectators attending the 2014 Volcom Bowl-a-Rama were along the same vein as years before, and this contest was like no other. Bowl-a-Rama Getxo had some of the best bowl riders from all around the world in attendance, from radical high flying American and Brazilian young guns to old school legends. The contest took place in the backyard pool style bowl in sunny Basque country a stones throw from the beach. There were skate events going down all week, but we showed up Friday afternoon, right as the bbq session was about to let loose. 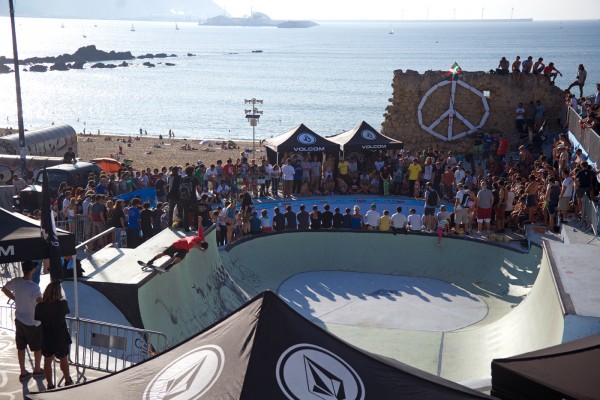 Sky Siljeg from Seattle, Washington. Backsmith over the hip into the shallow end. Photo: J. Hay

Around 7pm the bowl got shut down for the day but the party continued on the hills surrounding La Kantera skatepark. For some the party never stopped and continued through till the next day. Some headed off to the tapas bars, some stayed at the Luna bar on the hill overlooking the skatepark, some went to Bilboa, tattooed, puked, got lost, slept on the beach, and some even made it back to their paid or free accommodations. Eitherway, there were about 700 people there the next day for the “main event”. The skating (as to be expected) was totally radical, balls to the wall madness! Standouts were Felipe Foguinho, Chris Russel, Sky Siljeg, Pedro Barros, Cory Juneau, Danny Leon, and Alex Sorgente, but I could also list another 20 dudes that were murdering the bowl, Alain Goikoetxea, Ian Campbell, and Diego Doural from Basque country, Guillaume Mocquin and Vince Matheron from Marseille, Giorgio Zattoni from Italy, Rune Glifberg from Denmark,  Omar Hassan and Grant Taylor from USA… you get the point.

Nilo Pecanha from Brazil with a stand up 5-0 grind over the hip. Photo: J. Hay

Chris Russell destroyed the bowl with a variety of original tricks and huge airs bashing down to disaster on the pool coping. Pictured here with a boneless. Photo: J. Hay 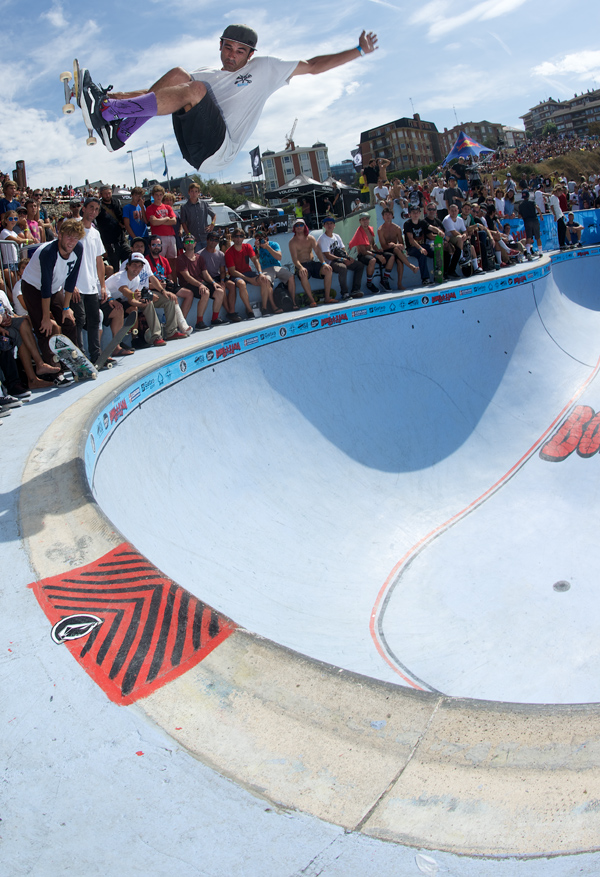 Basque ripper Diego Doural. I have a photo I took of Diego at Pool Party 2006 at La Kantera that looks just like this. Diego skates with style. Photo: J. Hay 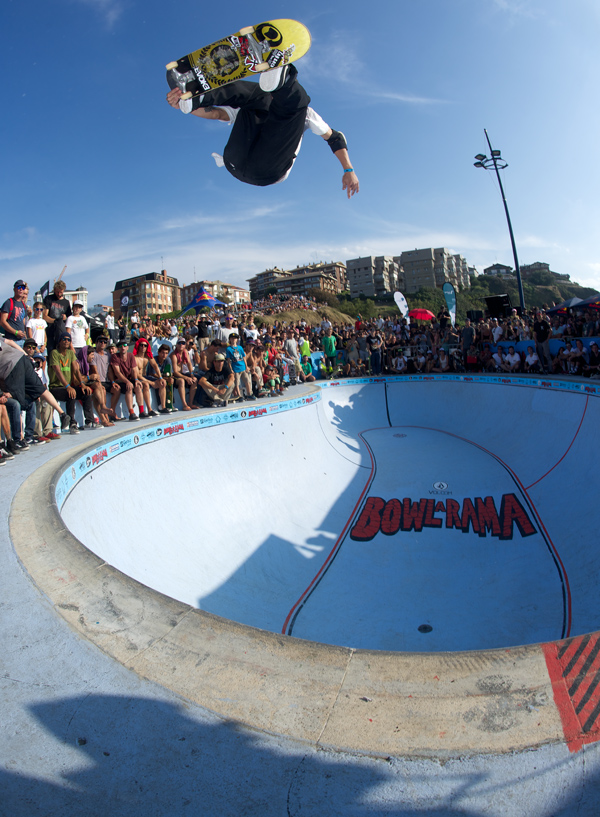 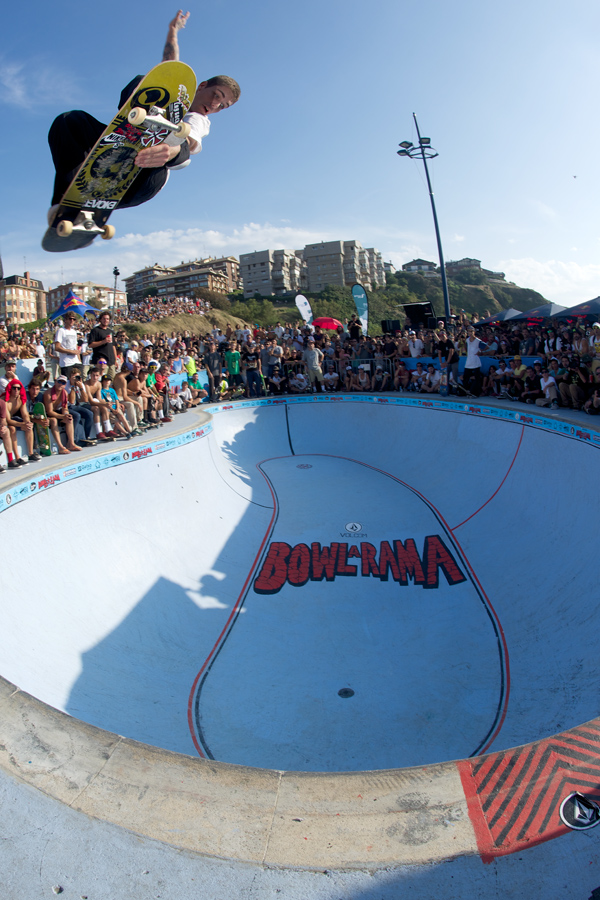 Felipe Foguinho with a large lien air in the deepend. Out of all the skaters, Felipe was going the highest. Ph: Hay

Chris Russell from Hermosa Beach, California reaching for the coping in the eggplant. Photo: J. Hay 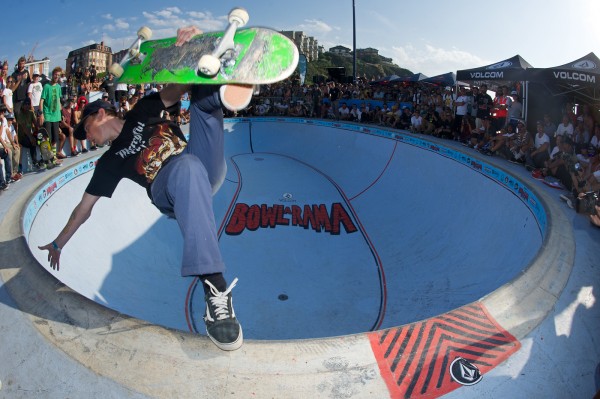 Chris Russell with one of the craziest tricks I’ve ever seen in a bowl. Frontside boneless to invert. Photo: J. Hay

Felipe Foguinho from Brazil. Huge ollie over the ladder during the best trick contest. He smacked one of these down to disaster! Photo: J. Hay

After 6 hours baking in the hot basque sun, fighting for the pole position with forty other rabid photo/videographers, pounding as many waters and beers and we could get our hands on, the finals were over and then a best trick session went down over the removable pool stair ladder. Raven skated barefoot and busted a sick stalefish, Felipe Foguinho pulled a huge ollie to disaster, Omar Hassan did a kickflip, Daniel Cuervo did an invert one foot to fakie as three guys held the sketchy ladder so it wouldn’t slip out, Sky Siljeg was trying front smiths to ollie pop outs over the ladder and Ian Campbell nose bonked it. After all was done and said, skated and destroyed, the final 8 results of the Bowl-a-Rama went to Pedro Barros, Alex Sorgente, Danny Leon, Felipe Foguinho, Cory Juneau, Sky Siljeg, Josh Borden and Chris Russel. Master of the masters was Pat Ngoho from Venice, Sean Goff from England, Salba from the innerland empire of southern california and Getxo local Txus Domingues.

Pirate Hesh Crew Noah Phillips with his buddy Peter Fucking Hewitt. Too bad Peter didn’t skate. I was really looking forward to seeing him, Al Partanen, Raven Tershy, Lester Kasai and a few others that were supposed to skate but didn’t due to injury or some other reasons…

Simultaneously disappointed and relieved the contest was over. I could put my camera away and enjoy some beers with old and new friends as the sun dipped into the sea. But then came the dirt downhill…