Confusion headed up to Berlin for the Shitfootmongoland, an independent, skater-owned tradeshow, and ended up hanging with the Warriors and the Jean Jaques possee from Belgium at the Betonhausen DIY outdoor concrete bowl as well as a few moments at the diy spot and wooden ramp that was built for the the skate x party week. This isn’t as much a high-lights reel, it’s more to capture the overall session.

Apart from the session at Betonhausen, I shot a few photos here and there without my flashes which remained in my heavy backpack the whole weekend, but Alan Maag was on point as usual and shot a few sick shots that he kicked down for your viewing pleasure. So here is a photo recap with photos from J. Hay and Alan Maag. Thanks for the good times and faded memories…

Koekie taking a second to test out if the “Shark Wheels” that Volker Lux is distributing through Subvert Shop really work… But I made him do it for the photo. I think Koekie wins some free wheels, wasn’t that the deal Volker? Photo: J. Hay

Martino Cattaneo. Off the wall. Wait til you see Alan Maag’s sequence of what he pulled next. Photo: J. Hay 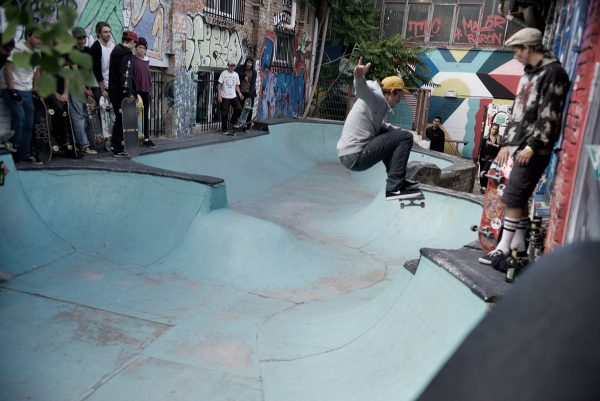 Alan Maag holding up one of his photos from his exhibition at the Warriors booth at the Shitfootmongoland tradeshow.