Brusk Collective from Brussels, Belgium recently hosted the “Fiesta Des Ursulines” celebrating 4 years since they completed their social-urbanistic skate project with the completion of their first concrete bowl and street skating area in the Square Des Uruslines. They invited part of the Consolidated team (Roberto Alemañ, Sean Gutierrez, and Danger), to celebrate the release of their collab Brusk/Consolidated board. Roberto would come up from Spain and Sean & Danger would make this event the beginning of 6 month stay in Europe, where they are building a new park with Grindline in Copenhagen, Denmark.

We knew this skate fiesta would be a perfect setup for a hectic weekend of skateboarding and beer drinking, so we packed up the van with 7 dudes and headed from Köln, Germany to Belgium,  where we stayed at the Brusk Collective’s commune in the heart of Brussels. I’ll save that story for another post as a lot went down this weekend…

We arrived via a brief tour de Brussels on skate around 1 in the afternoon and skateboarding was already fully underway. I soon found Danger, Sean, Roberto, and Leticia from Consolidated who flew out for a 2 week tour of Belgium, Holland and England. The event lasted a solid 8 hours, where all kinds of strange activities were going on (they have some strange folks out in Brussels I tell you…) There were people dressed as muscle men, a freaky bride MC, old boobie man, bears, zombies, and 17 year old british style punk rockers with mohawks (oh wait maybe they were “real” punks and not just dressing up for the Fiesta.)

The skating was solid throughout the day, with hundreds of people gathered around the bowl, freshly painted by the artist ELNINO76 in an intestinal pink. [you can see the artist’s plans for the painting here] The promised “chaotic session” with a punk band playing on the deck went down as planned! I proceeded to get completed worked in the bowl (nicknamed “the punisher”) within minutes, and took a 2 hour break to have a revenge session in the punisher in the dark which culminated in hundreds of empty beer cans thrown in the bowl as well as some idiot throwing in a glass bottle which sliced my hands into bloody mittens. 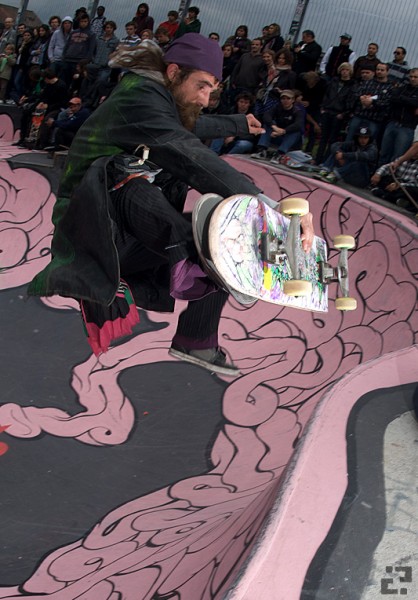 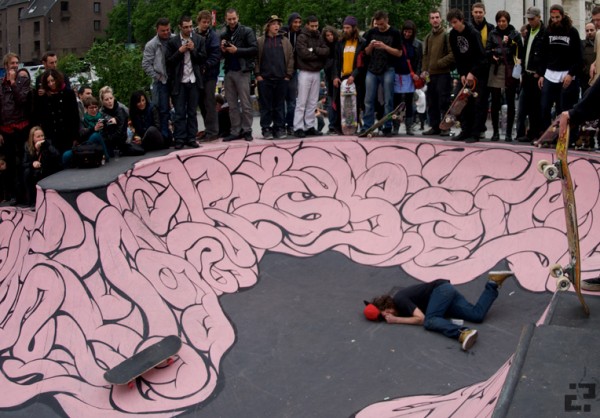 At some point, the masses began to thin out, Danger Dave was inviting us to an after party (which of course wouldn’t end until sunrise), which we barely slipped out of in the last minute (unlike Sean and Danger) and lived to fight another day….

Leticia and the Bear.

Ian Dykmans had to leave half way through the event him and the Brusk Collective planned. Hospital visit after kissing the flat bottom. 5 stitches and 2 hours later he was back.