Here at Confusion, we don’t usually give away other people’s stuff, we’re too busy giving away our own, but, we like Skreetch, he’s a total psycho and he rules, and we’re also down with Addikt Skateboards, a true skateboarding company that is struggling along with the rest of us and doing exactly what they want to do. Also, Dragonslayer is a cool film about the life of Josh “Skreetch” Sandoval with a bunch of real backyard skateboarding and an interesting storyline. This film was entered in the SXSW film festival, and actually won some big awards: Best Documentary Feature and Best Cinematography. Dragonslayer is definitely worth checking out. Josh “Peacock” Henderson also is in the movie and helped film some of the pool skating. So without further ado, here’s the contest:

SNAGFILMS is giving away swag for the iTunes launch of DRAGONSLAYER, the award-winning skate documentary about Josh “Skreech” Sandoval.

The winner gets an Addikt Skateboard deck inspired by the legend of “The Gonz” graphic. Three runners-up get an action-packed street skateboarding DVD featuring Skreech and other insane skaters.

To enter the contest just send an email to dragonslayer@crowdstarter.com with “Confusion Magazine” in the subject line. Winners will be drawn at random. 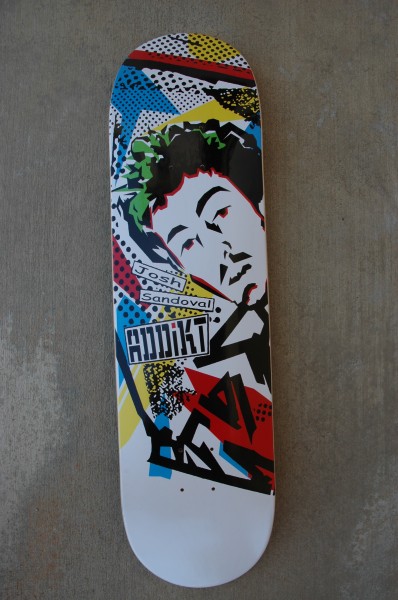 Good luck! There’s about a 650 million times better chance you win the Skreetch board than the 650 million dollar lottery.

AND THE WINNERS ARE:
Winner of grand prize: