NorthBrigade officially re-opened last weekend to celebrate the new concrete bowl and street area completed last October by Anker ramps, right in time for the long German winter. Since the completion of the park only a few heated sessions have gone down due to sketchy weather and limited early spring opening times before this official re-opening sponsored by Vans and a few other companies. The weather more or less cooperated last Saturday (except for half an hour of rain that forced everyone to find shelter in the beer and food tents) but there was a big turn out of skaters and spectators alike.

Skaters from around Europe showed up for the opening including Martino Cattaneo from Lugano, Switzerland, Robin Bolian (Lyon, France), Tyler Edtmayer (US and southern Germany), Bjørn Lillesøe (Copenhagen, Denmark), Danny Leon (Madrid, Spain) Tim Bijsterveld (small town in Holland), Kevin Wenzke (small town in Germany), and Koekie (small town in Belgium). We got to the bowl just in time for the ‘best trick’ contest.

Danny Leon. Blasting the hip probably higher than anyone else has, yet. And he was kind of just cruising…. Photo: J. Hay

Koekie. Lien slide over the hip. My friend has 2 Bull Vans. No shit. Photo: J. Hay 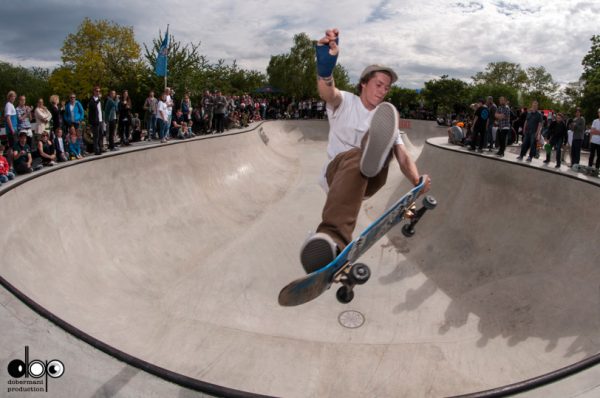 1. Danny Leon, Rodeo Flip
2. Tyler Edtmayer, 540 in the Deepend
3. Robin Bolian, massive transfer from the vulcano to the hip
4. Koekie, one footed carve in the deep-end.

Somehow out of the ten runs I filmed I managed to get the four of best tricks on video. Then it rained. Had a beer and a burger. The rain stopped, sun came out, rolled to the Owl Bowl session at the far end of the park. Slipped out on the smooth wet crete rolling down a bank straight to swellbow explosion. Lurked out in the corner with these guys in the photos (and video coming sooner, or later).

Meanwhile, Mr. Bookwood was documenting the street contest on the big rail and stairs at the other end of the NorthBrigade. Here’s three of the highlights.