I guess I’ll start with Thrasher Skate Rock. Mark Waters from Thrasher contacted me in April about stopping by the Hole on the Skaterock Tour. He said they were down to just stop by and skate but they really want to play a show. So I thought about it and replied with a yes. So with many preparations, May 6th rolled around, or maybe May 7th. I don’t remember, but it was a Monday. I thought because my place is in the middle of nowhere, at least an hour from the city, that very few people would show up on a Monday night. But I was wrong. People poured in from all over throughout the weekend and on Monday – It was packed. The weekend was full of skating, creating, and positive energy until Thrasher showed up…

My girlfriend Anna sunbathing as we finish the first pour of the summer. Notice T-Mo’s unfinished graffiti post on the top left of the pool. That guy is cut for life.

I had emailed the Thrasher guys directions weeks before and asked them if they needed any info, but they never got back to me. Monday afternoon came and no word from Mark Waters or Thrasher. The only indication that they were near at all was that someone posted something on Instagram about pro skaters being at Kings Highway or St. Louis under the bridge DIY park. So after another few hours and I get a text from Mark that they are lost. I called them and reeled the fools in. About 7pm, I’m up on the porch of the big house and Jake Phelps walks up looking for the owner of the property. So I welcomed him and answered his questions/requests…. Darkness came and the bands started roaring. As far as I could tell not one pro was skating out of about thirty who came. What I didn’t know was that soon enough nobody would be able to skate…. 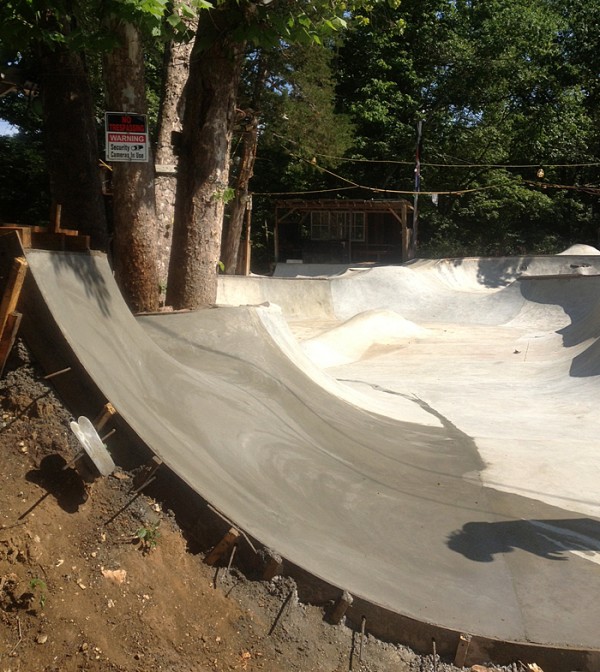 Second pour of the summer which connected a few new lines for the upper deck’s skate track!!

They said in Thrasher they “lit it up like Vietnam” and that’s what they did. It was like an attack of coked out gremlins. Those guys sucked. The weekend was great until the black thrasher cloud rolled in. They acted like a bunch of asshole – tough guys with something to prove. Or more like pirates!!! Fires, graffiti, beers tossed into the bowls, trash, girlfriend snatching, fighting my friends, shit talking and just pure disrespect. I will never allow any of those thrasher guys, Antihero, Grant Taylor, etc. back to my place again. They are very unwelcome!!! It’s was like an attack of terrorism. No thank you Thrasher. And your music sucks too! 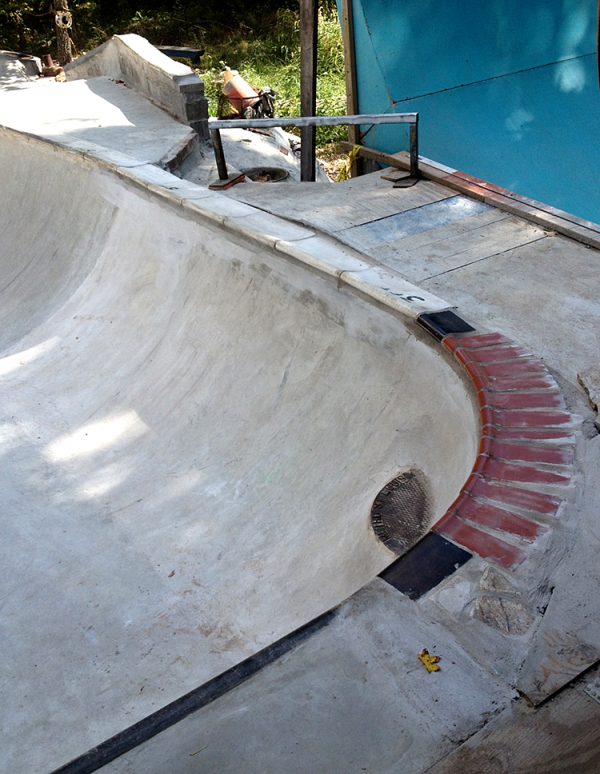 3rd pour of this summer 2013 was a very hot day plus we were severely hungover and under staffed. it worked though.

So with the pirates gone and two weeks of cleaning up the place, good vibes were back on the rise and summer was here!!! Team Pain was near St. Louis building a private backyard park for some rich guy and they invited me to come work for them part time. So I did when I could and the Team Pain guys came out to skate the Hole on weekends when they could. We also knocked out another small backyard bowl in Columbia, Missouri in just a few days then two big pours at Hermann’s. it was great to have those guys around. We filled the pool with water for the first time on July 4th and were able to finish concrete and swim at the same time. It was a blast. Big thanks to Lance Spiker, Greasy and Spidey from Team Pain. 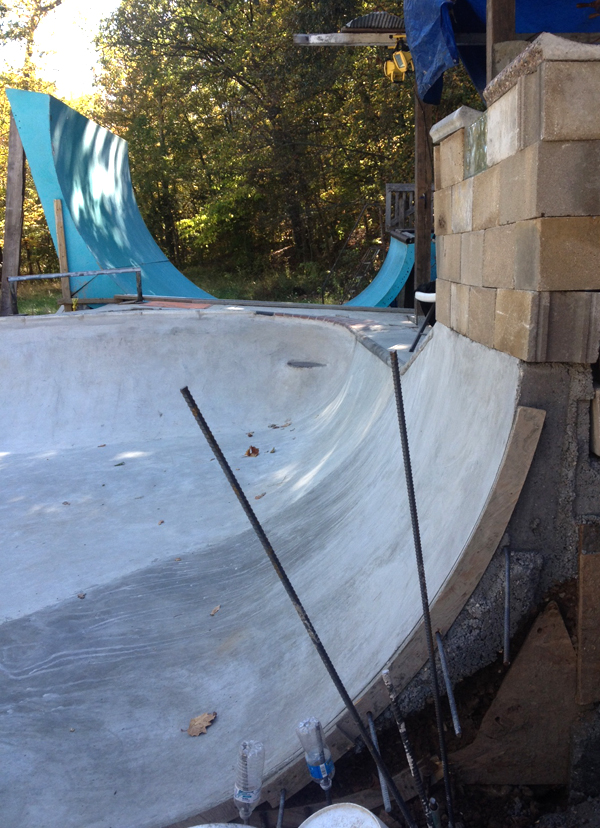 The latest pour at Hermann’s. Cinder block wall is now set and vert wall had been swiped with urethane.

With summer closing in, many other guests came from all over the states and we knocked out two more concrete pours!!

These days Hermann’s Hole is more complete than ever and is always a progress in the making.   – JP Kraus

Check Hermann’s Hole blog for past and future updates.

Check out the Hermann’s Hole article in Issue #6 of Confusion. Print or Online.