Yo! Here we go again. What can I say? Same shit, different year. Against that covid bullshit Rozkurwiel Crew packed the van and hit the road once more. It’s 12th time in a row. Year after year. No one believed it will last that long. Nine guys, nine days and one stinky bus. Sounds like recipe for failure. So once again, jump into our bus and have some fun. You never know which tour will be the last one! Mucho cheers!

We had the stupid idea to start the tour at 6.30 in the morning. Yeah right. What can go wrong? Everything I guess. Luckily our meeting point was at our local skatepark so punctual guys cracked a few beers and had  solid skate session before the tour officially started.

2er in Hanover was our first spot. It’s always a great idea to start the tour over there. You can’t go wrong with 2er. We planned to get there at 15:30 and after all we arrived at 20:30… Anyways we had a great time there. Locals were as always very welcoming. They were playing instruments and were yelling “Rozkurwiel!” in the middle of the night. Boys set our tents on  the miniramp. Best place ever. We should have stayed there for the whole tour. 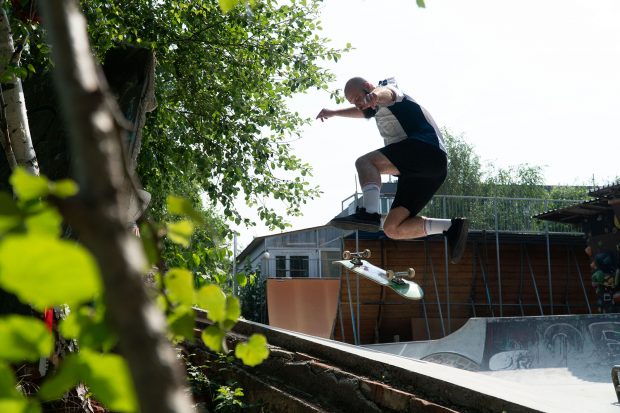 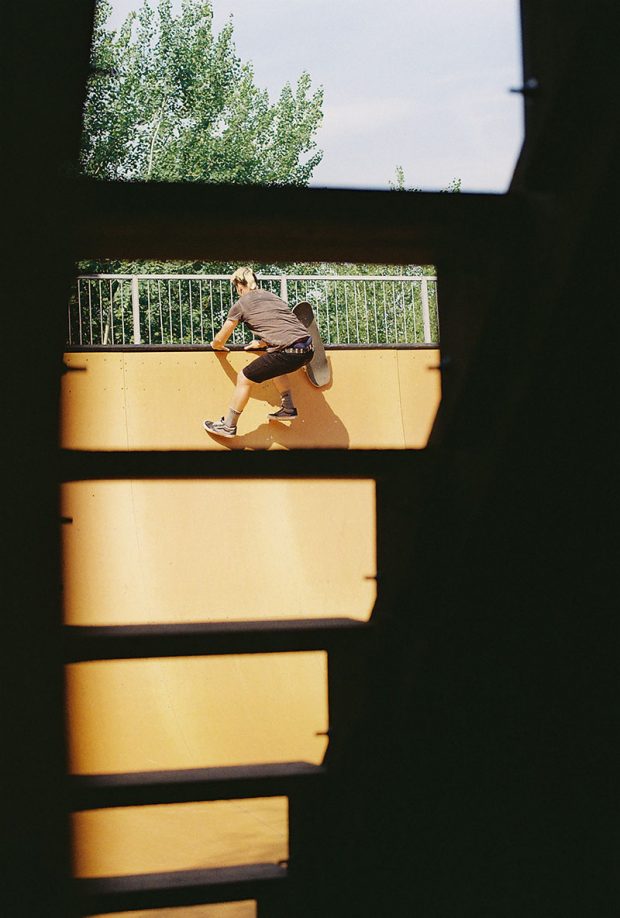 Drew put pads on (for the first time in his life) and knee slides became his favoire trick. Photo. Kobi

What to add It’s your choice. Photo Kobi

At least Kobi got some roof over his head. Photo. Strejli

After Drew’s stupid slam on vert ramp (I will not even talk about that) we get into the bus to start our main – Benelux – part of the trip. We planned first Benelux stop at skatepark in church in Netherlands. Waste of time. It’s closed. Probably for few years already… Oh well, in the evening we found ourselves at camping in Amsterdam. We decided to hit the streets for night cruising, visit Red Light District and had a lot of drunk fun. My favorite spot was some art exhibition where we found safe place to take a piss, drink few beers and not worry about getting tickets. 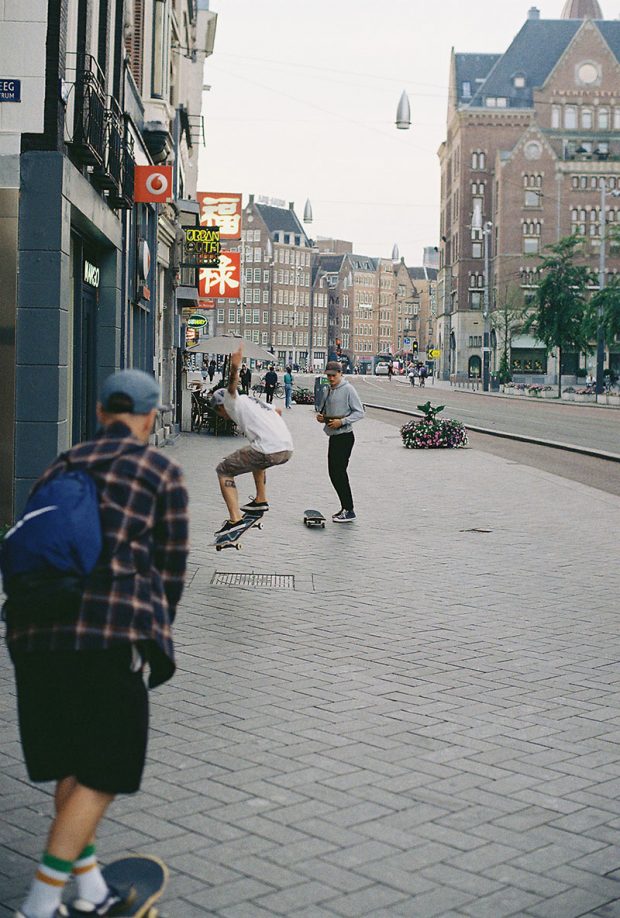 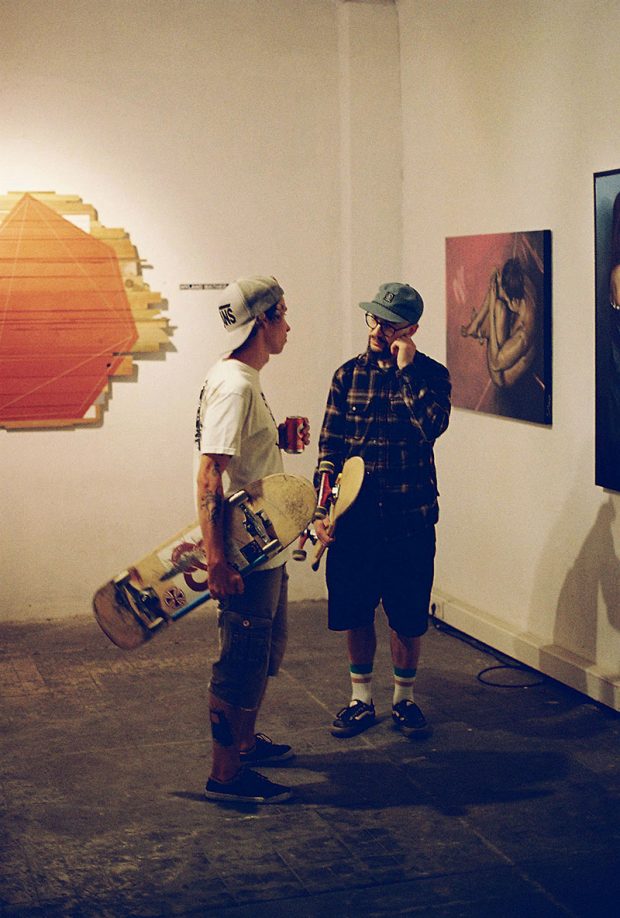 On the way back I decided to ride down metal stairs on the bridge next to our camping. It took few tries (ok, way more than “few”) and it was very fucking loud… It sounds like World War III started. When we get back to our camping security guard yeld at us. That pneumatic hammer stairs mayhem like sound probably woke up every tent. Sorry guys.

Last night was very intense but something was missing. What? Fries with mayo! We visit biggest skatepark in Amsterdam (in Netherlands?). Very cool, but best part was local joint with… yes, you are right! With fries sunk in mayonnaise. That was best trick of the day. No more to add is necessary. 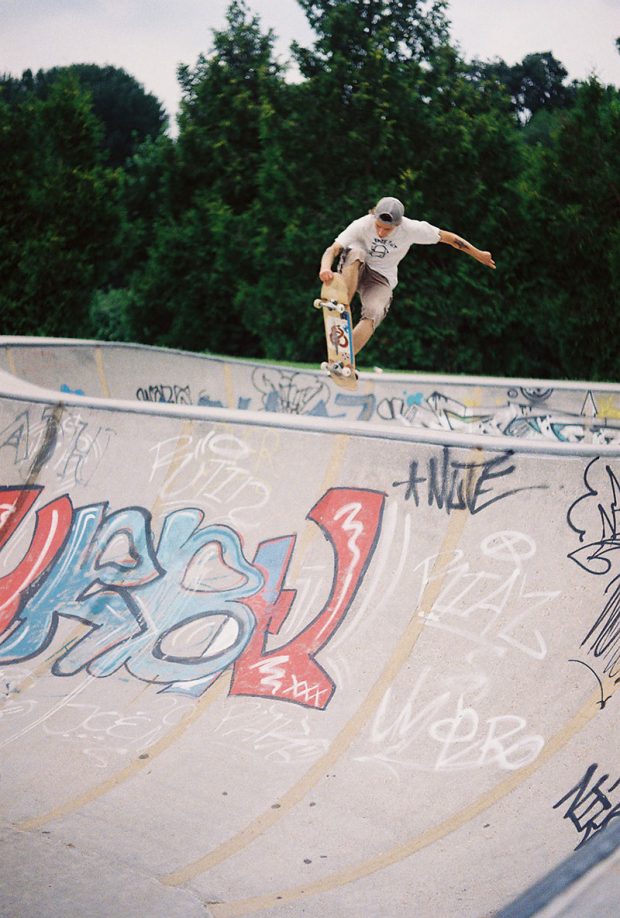 …and fs ollie on the way back. Photo. Drew.

Kuba with some bmx action! Yes, there were 2 bmxer in our bus too. Don’t be ashamed of that. Photo. Drew. 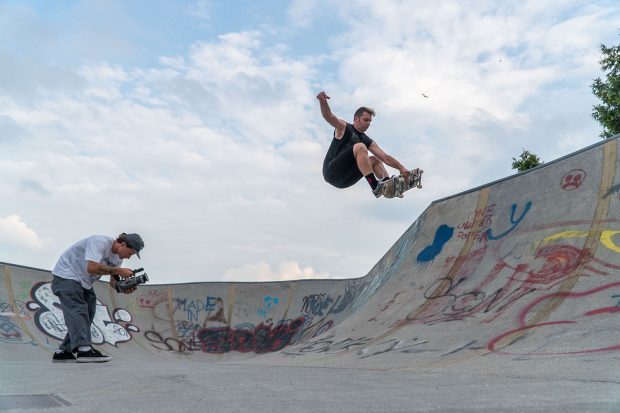 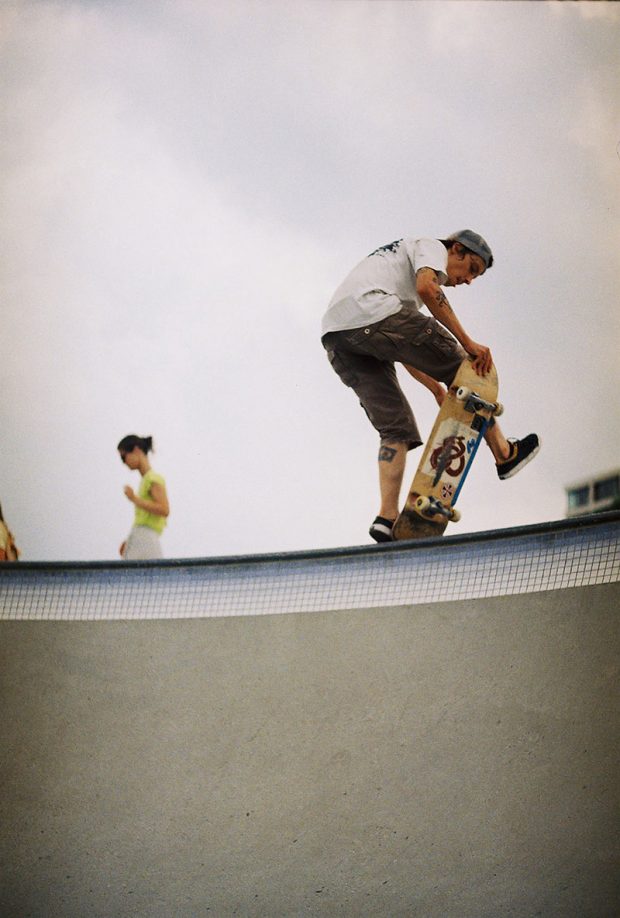 Kobi with one footed tailtop in smallest bowl of biggest skatepark in Amsterdam. Photo. Drew.

It was time to pack our shit and hit the road. We stopped at skatepark next to school and then said “bye bye” to Amsterdam. Next stop was Hague. At least I think it was Hague. Kuba was there some time ago and wanted to shot a photo on the downhill. Did we make his dream true? Let’s find out! 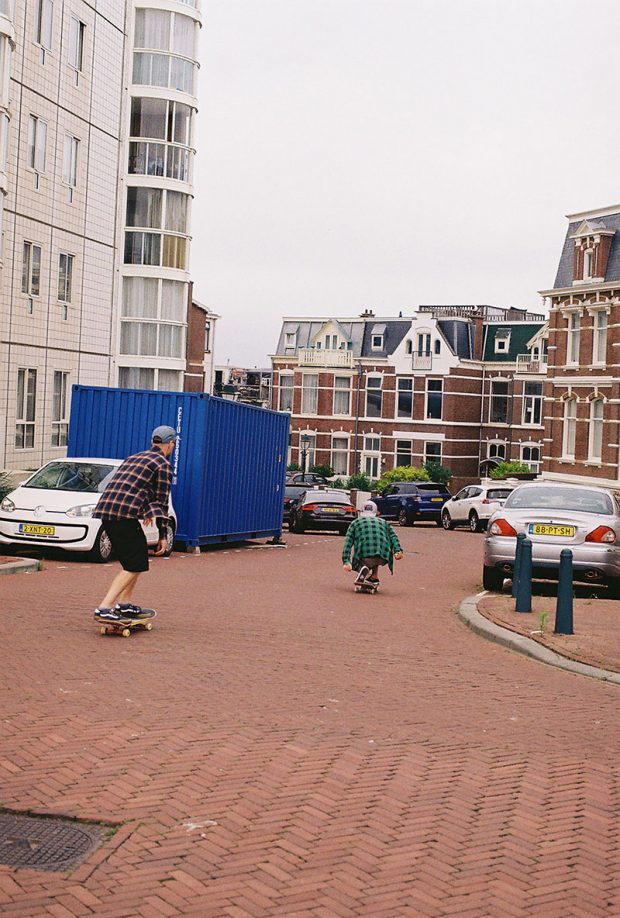 We visited Hague for that downhill that Kuba spotted on his other trip. Photo. Kuba. 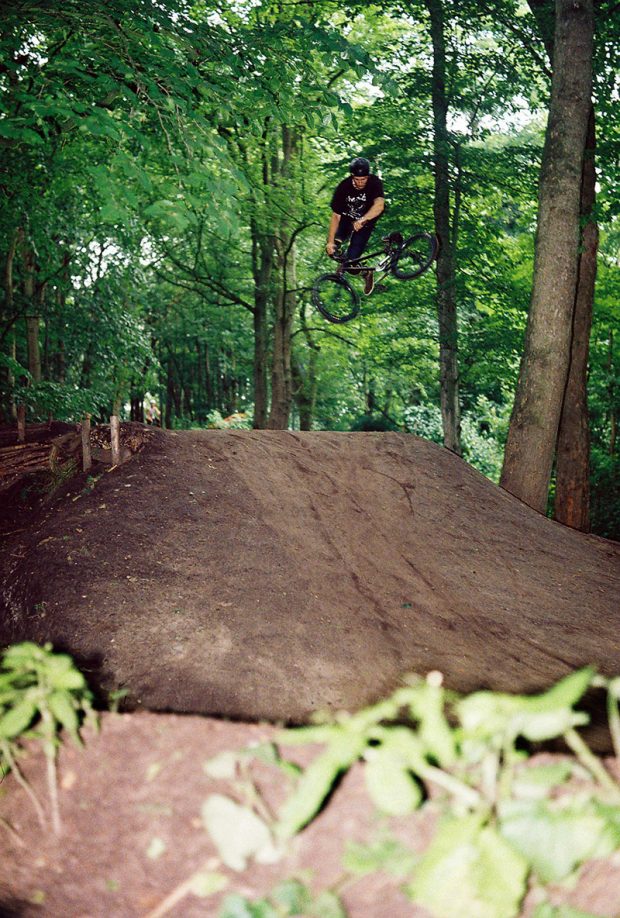 Piechta went wild in these woods. Fucking the barrel of death! Photo. Drew.

There was also small square bowl where you could go around over and over. After that we visit Rotterdam. Bowl in the park was full of scooter kids. It was crazy. But we met there:

– polish family with small skate girl – young ripper! In a few years she will probably talk in some Thrasher’s interview how she met Rozkurwiel crew and how it changed her life

For the last spot of the day we hit some “Miami vibe” skatepark next to the beach. However it was cold and windy as fuck. For the first time in Rozkurwiel Tour’s history I was skateing in crewneck! Am I getting old or was it coldest tour yet? Hope second answer is correct. Fuck, sure, I’m getting older but you got the point. Anyways I decided to wear shorts no matter what!

Cold shower next to the beach and tents on some parking. No more camping luxury! And you know what? That’s how it should be on these trips! Now we have only “shitting in the bushes” to ticked out from the tour list and we are home. 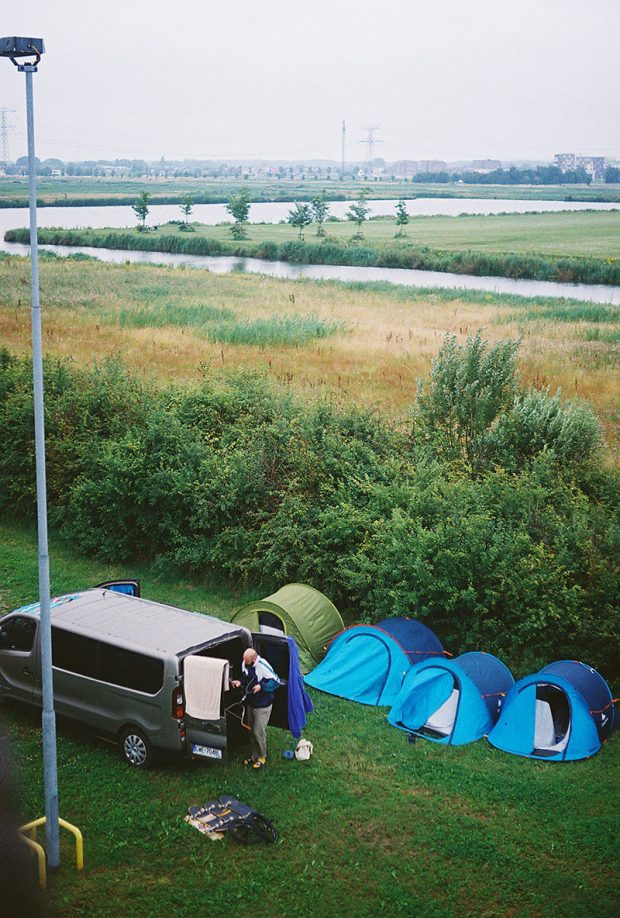 Our wonderfull camp. During that photo I might be taking shit on the other side of these bushes. True story. Photo. Drew.

Kobi with hippie jump. One of the tricks that I must ticked on every tour. Photo. Piechta

We went to some Rotterdam skatepark between streets. Nothing interesting to add but I can mention two facts. First of all, we met that polish family again! If you are reading that, young lady please don’t stop skating and don’t follow our footsteps. Cheers! Secondly, Santander Bank is shitty as fuck! Myself and Kwiatek (both with Sandander debit card) had a lot of problems with paying. It was like Russian roulette. You never know. What a bullshit. Payments were getting rejected left and right. I hope someone from Santander will read that text and they will stop calling me with some stupid offers. Thank you Larry7 and Zraz for helping me with money! You saved my ass. Kobi and nose manual up and down. Photo. Kuba

Mechelen, Belgium was our next destination. Did I mention that it was coldest tour? It was. Anyway, is Mechelen diy park or not? No idea. It was amazing. It was raining. I almost went to psychiatric institution… Why? I noticed there was a P-Stone painting on the steep wall. Ok, I need to get some trick on that wall as a tribute to the best filmer ever. I picked BS Boneless. I really like that one. The only problem is that I can’t really do that trick… That was my mental battle. I wish I know how long it took and how many tries. I was losing my mind at one point. Somehow I did it. How? No idea. Skate gods appreciated my stubbornness and let me roll away from that one. I appreciated Kuba’s patience (he was filming it) and give him a 4-pack of cold beers. Thanks mate!

Kobi about to loose his mind. Photo. Piechta

Cold refreshing river and fire camp was great way to finish the day.

Belgians are crazy! Their beers are satans. Definitely not light beers for sport activities. But they were very tasty. Especially one with pink elephant on it. Delirium or something liked that. Check that one out when you’re in Belgium. We visited three spots I believe but I will mention only one. It was old velodrome and skatepark build by Concrete Skateparks. If you know other Concrete Skateparks creations then you know what old school vibe to expect. It was nothing less.

Another day, another skatepark. I have no idea where it is. Photo. Kuba. 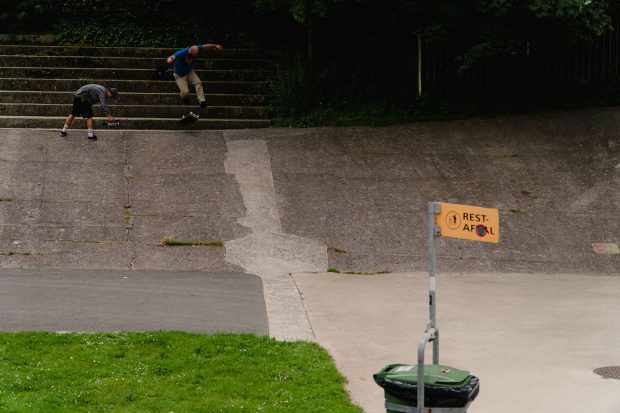 Strejli and 360flip into the bank. Hell yeah! Photo. Piechta Night at the dessert 2. Photo Drew.

Night at the dessert. Photo Drew.

Night at the dessert 3. Photo Kuba.

Luxemburg is known for its Péitruss Skatepark and that was our aim. There were some flood days before so skatepark was covered in mud. We manager to clean that and everyone had a blast. One of the best skateparks I visited. You can find there everything.

I will not tell about skating but let me tell the story. It happened to one of Rozurwiel Crew member – I will not tell you who it was so let’s name him Pedro. In Luxemburg there is supermarkets chain called Cactus. We stopped at one of Cactuses to buy some water and other stuff… Pedro also went for shopping. After few minutes of walking between alleys he went to checkout. After scanning all the products, lady asked “Do you have cactus card?”. Pedro had no idea what lady is talking about. “Cactus card? What the fuck?”. They were repeating same dialogue few times:

“Do you have cactus card?”
“Could you please repeat?”

Pedro finally connect the dots. “I’m in CACTUS market!”. So he replied to the lady “No.”. Further it was getting worse… Lady asked if Pedro needs shopping bag. Our amigo replied that there is no need as he have his own eco bag. He put his hand into the pocket and take out… his socks. Lady looked at him and realized what type of guy she is dealing with. No more questions were asked. Ok, I was that Pedro.

That what we found on the skatepark. We were lucky. It could be still water. Photo. Piechta 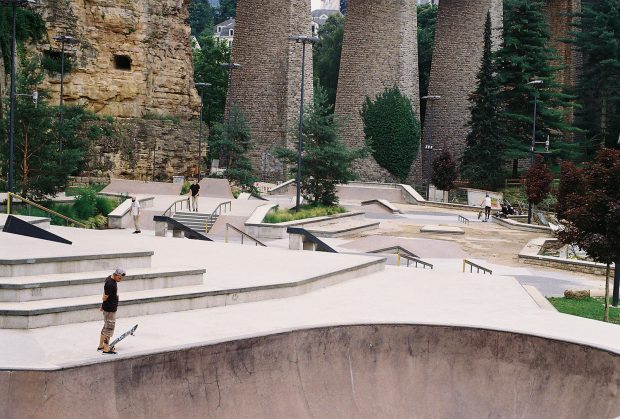 Another view of the skatepark. Photo. Kuba.

Kobi in the egg. Photo Drew.

Kuba with 50-50 or however it’s called. Photo. Piechta

Final stop of our trip was Berlin. Great place for final actions. We stopped at Three Little Pigs hostel. Promising name. I grabbed few pretzels and Berliners, and I was ready for the mission. To be honest, we barely skated. I wanted to skate at skatehalle, but they closed the door in front of my face. Bastards! Anyway, night was fun. Don’t you believe me? Ask Kwiatek!

Time to get back to home. After night before, Kwiatek was not able to drive… So behind the wheel we could find Piechta and then Larry7 (thanks guys!). I sat in the front raw of the bus together with Piechta and Kwiatek (who was drinking vodka from the morning). He was very loud and… active. I had two options. To fight with him or to join. We were still in Berlin when I was opening can of beer. Wonderful road.

How to sum up that trip? I have a feeling that we hit only half of the planned spots. We didn’t reach such amazing places as some diy in Berlin, legendary bowl in Amsterdam… What an unfortunate. Damn it. It’s not as big bummer as not checking Marseille few years ago but still. There is no reason to cry. I strongly believe that it was not last word from Rozkurwiel Crew! We just told “A” so it’s time for “B”. Fuck, that outro is very wack but let’s keep it. Fuck it. Fuck the world. Thanks everyone! Kids, read more skate zine, watch less porn. Special thanks to Grachu!