Bergfest 2012 was a blast, from what I can recall. The biggest German concrete bowl party of the year in Münster, at the Berg Fidel Monster Bowl, an old concrete bowl which has been restored and modernized. Airs. Lip tricks. Bomb drops. Beers. BBQ. Schnapps. NBD big rail. Jäger without the Monster. Bleeders. Pukers. Ben Schroeder. Party. Adolescents. Pit. More blood. More beers. Taxis. Hotel. Party. Blacked out. Lost in Münster. Some photographic memories to the rescue… Photos: J. Hay Day 1 & first half of Day 2 (featuring the Adolescents): Filmed / edited by J. Hay

A guy in the amateur division, busting a fat stale fish. Can’t remember his name…. sorry. But I dug around on google and figured out it is Christopher Skubis, from Hagen, Germany, home of the best and biggest backyard pool style bowl in all of Germany! So no wonder Skubis can bust fat airs, he learned to skate in a gnarly bowl.

Ben Hatchell. Blasting out of the frame.

Robin Mentrup. Full speed 50-50 all the way around the deep-end of the bowl, and about 5 centimeters away to smashing my camera.

New kid on the block, from Holland, Robian Fifield, airwalk to Fakie. Robian kills it!

Upon arrival on Day 2 of the Bergfest, this unidentified Australian was spotted at the entrance. But don’t worry, he’s a good cunt.

Tim Bijsterveld. Andrecht plant. I’m blaming Tim for introducing me to the Monster tent where you could get Jäger Monster without any Monster, for free, for riders (and photographers?). A soda cup for off Jäger on ice tastes good, but…

Tim “the bomb” Bijsterveld. If the trees were closer to the bowl, he’d climb to the top of them and bomb into the bowl. 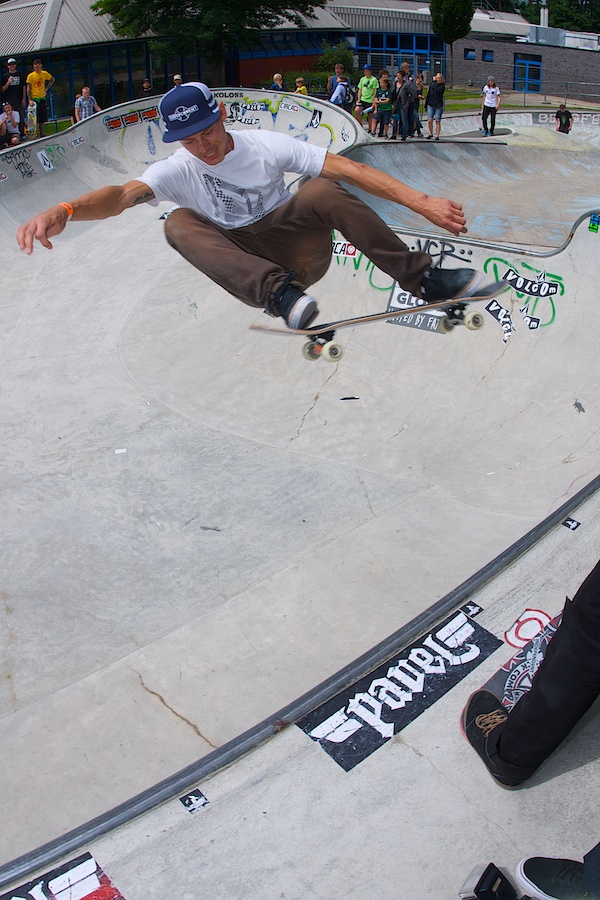 Tobias Springborn. 2nd place in the Master’s Division shown here with a Lien to Tail.

Renton Millar used his vert skills to be one of the few guys, apart from Jürgen Horrwarth, Ben Hatchell and Ivan Federics to really take advantage of the big bowl at the Monster Bowl. Which to me was kind of disappointing, it was a Bowl contest, not a concrete miniramp contest which seemed like what was going on in shallow end. If you got a big deep bowl, skate it. Renton ripped the deep end.

Ben Hatchell with a big stalefish in the deep-end.

Renton Millar, transferring from the shallow end into the deepend. That takes some balls I would say. 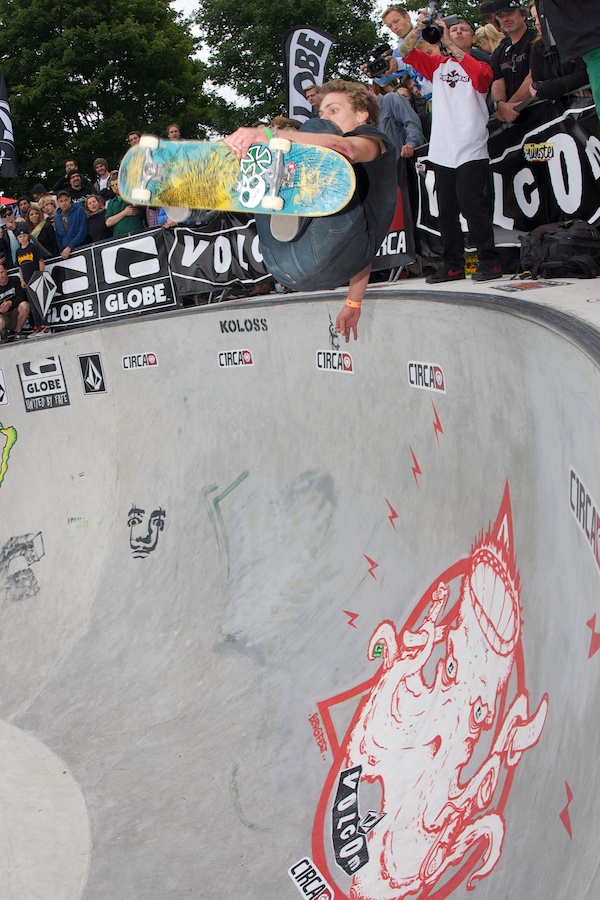 Don’t know this guys name, well, he told me, but I forgot again. Nose pick. After the finals, before the best trick contest.

Jürgen Horrwarth. Huge backside ollie almost landing on my head. And yes, he pulled it. This one was on request.

Sometimes you go to a skate event to get good footage and photos, other times you (or at least I) go to hang out with friends from around the world, share some beers and laughs, and couldn’t give a shit about taking a “perfect photo” with 20 fisheye lurkers or banners ruining the photo anyway. This was (at least) one of those times. Hope you enjoy the video even 1/10th as much as I enjoyed filming it… Next time, I’ll take my “job” more seriously…

Day 1 & first half of Day 2 (featuring the Adolescents):