Best of Both III took place in Düsseldorf, Germany late August, 2010 at the newly built Combi bowl, which Dietsches created and added a second steeper, tighter section onto the old Factory Bowl complete with full pool coping, in contrast to the steel coping of the older Factory Bowl. The new bowl features a loveseat and an over vert cradle with a spine connecting the two bowls together. Last year half the contest took place upstairs at the pool replica OMSA bowl, but this year it all went down in one day (not two) down in the combi bowl.

But at the end of the day, the top three spots went to Hoax Clothing riders Kevin Wenzke, Jason Parkes, and Koeki who were dominating the session with endless adrenaline fueled high speed lines throughout the combi bowls (check the video for proof). Also tied for third place was tech bowl ripper Thilo Nawrocki, (Thilo and Kevin Wenzke also skate for Pavel). So it was basically a Hoax…. Pavel Skateboards demo with a couple Austrian and a couple Belgium dudes thrown in for good measure.

Everyone had fun. Beers were drank. Hardcore skateboarding went down for hours and then most people realized, “skateboarding is a spectator sport”. Some people who will go unnamed didn’t want the party to end and went downtown Düsseldorf and brought some chaos to the streets until the police showed up and everyone scattered and disappeared into the night…. the end.

Lensin from Düsseldorf was also a standout ripper. 5-0 grind over the loveseat. Photo: Hay

Kevin Wenzke. Back smith over the loveseat. Photo: Hay

Kevin Wenzke. Best trick which helped him earn the winning place in the contest. Padless 540 McTwist in the deepend of the Factory Bowl. Photo: Hay

Asti from Austria. Feeble to fakie over the loveseat after the contest, with Koeki and Yoeri from Belgium giving a little motivation.

Wenzke. Not soo excited about his Rockstar Guitar he just won. Photo: Hay 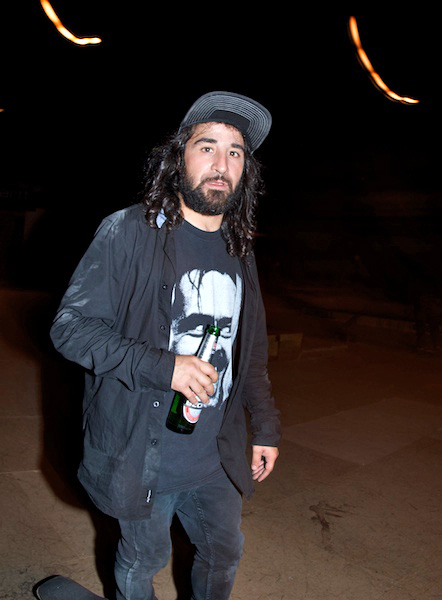 Matteo from the Shining.