“Holy shit, what a weekend in the little town of Brixlegg. As I am writing, I am still trying to recover from the after Party, but let’s get to that later. In the heart of the Alps in Austria, the bowl skating scene witnessed concrete mayhem at it’s finest! The skies were cloudy but it was the perfect autumn day, staying dry to session all day and night. Let’s sum up the contest itself: About 30 skaters from Holland, Germany and Austria showed up to fight out the title of the Austrian Bowlmaster 2012. In heats of three it was qualification time and a Death Match Style Session of 10 to 15 minutes went down. The finals had heats of four, ending up with the following eight: Birthday boy Oliver Gordon, Stefan Atzl, Roman Astleitner, Thomas Reiter, Dave the Brave, Robian Fifield, Roman Erhart and Yama represent Dustin Vonach. It was banger time and the heats went a little longer than planned, but you know, when it is go time – it is go time, so we let the guys roll it out and left them to close the session themselves with unbelievable tricks and lines… 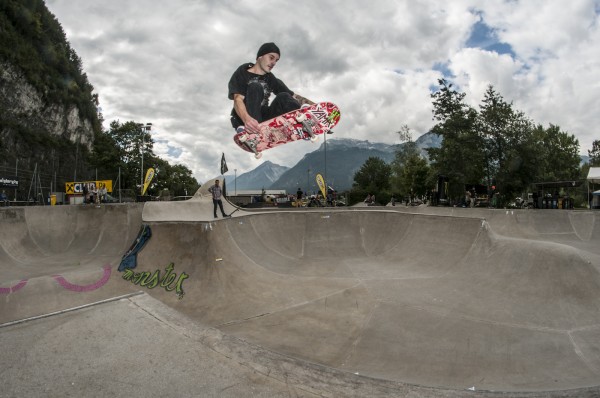 David Margreiter blasting over the hip (and the mountains).

Obviously the big bangers went down in the big deep end of the park where the walls are fucking steep and high… Back to back vert crossbone airs by Romi Erhart or FS lipslides thru the vert corner by Dustin Vonach just to name my personal impression. But also the hip was destroyed by air time high flyers boning in all directions just as some tech moves in style, such as Dave the Brave‘s Cab 270 Floaters! The locals stood strong for a while but at the end of the day it was Dustin Vonach from Vorarlberg who took home the title, the cash & the respect of all. He killed it in high speed lines all day long, throwing down the gnarliest moves, often back to back. My personal favorite freak was Robian Fifield from the Netherlands. His crazy style, some would call it drunk style (and it probably was) was rad to watch. Spontaneous, creative and often barely holding on, he one footed his way into second place, leaving one more spot to give away on the podium and I am happy to say it goes to one of Austrians finest Skaters, long time local, dad, hard worker and friend Mr. Stefan Atzl. He ripped the rough concrete with super smooth tech tricks like BS flip BS tails in the deep end area or easy manualing the island section via nose and / or tail. Just as much as throwing high speed grinds, longer than all others, just to get airborne over the hip like not many others! One guy stood out to the Judges too and all agreed on the award of best trick / best line was for Roman Ehrhart. Nosegrind pop out in the deep end just to name one of his bangers. 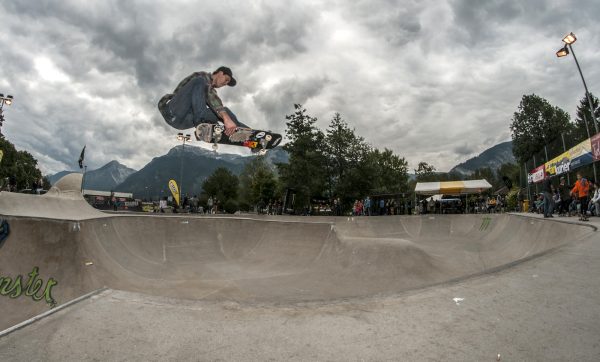 So prize giving went down – money was spread and needless to say, shit started to get really really loose. To the dirty rockin’ blues tunes of the White Miles the party was kicked off, leading in to punk rock from Enduring Freedom which again led in to the cops complaining about too much noise and guess what, that just led to more mayhem, louder music with some fine Austrian metal from the band Striker! Stuff was broken, over 16 big kegs of beer weere sold and consumed.

Fabian Müller. FS 180 over the river.

Fabio Rieser. Stylin’ a lien air high in the sky.

David Margreiter. Tailgrab over the hip.

Dustin Vonach taking one from Cab’s book, long frontside lipsslide around the corner.

And seeing I am still kinda sweating Jägermeister, I am going to finish off my personal view of the Austrian Bowmlasters 2012. Brixlegg is always a guarantee for a killer session and a killer party. See you again next year, when the heat is back on at the Cradle Skatepark.” – Chris Cab 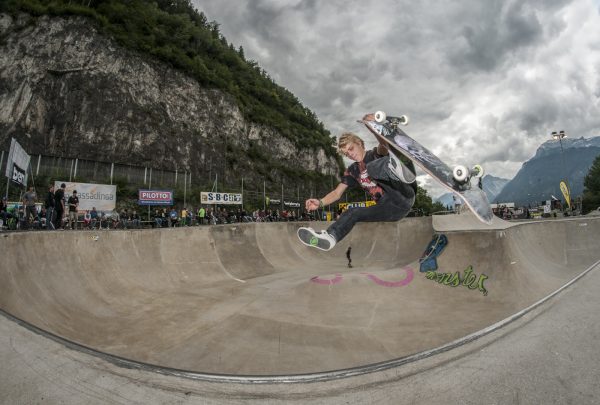