“I first heard of Tony Roberts as the filmer and editor of his ground breaking surf/skate videos like “Mental Surfing“, “Progression Sessions“, Speed Wheels Santa Cruz “Risk It!” and many more in the early 90s. His films were the best, maybe because of the cross-over developments between surfing and skating or because he started focusing on the radical aerial surfing of the Santa Cruz locals and he was the one who got photos of guys like Ratboy, Flea, and Barney in the surfing magazines which led to their almost instant success and world wide fame and notoriety. I would see TR on the other side of the lens busting airs over the hip at Derby or hanging out at the spots that we love the most. If anyone was my “hero” and biggest inspiration growing up in Santa Cruz as a surfer-skater videographer and photographer it was Tony Roberts. One day, he disappeared, and I heard he moved away to Santa Cruz… Costa Rica. He would never return to live in Santa Cruz. That was over 15 years ago, and he’s still there, living the dream… living at the beach in Costa Rica and in Nicaragua, running a surf camp, and shooting surf photos of tourists to take home their memories of surfing perfect waves. We re-connected a few years ago in cyber space, and every now and again I check in with TR to see what’s going down in Central America. Here is a mini feature he did with his buddy Kaleb Stevens, who also re-located from Santa Cruz to live la Pura Vida.”  – J. Hay 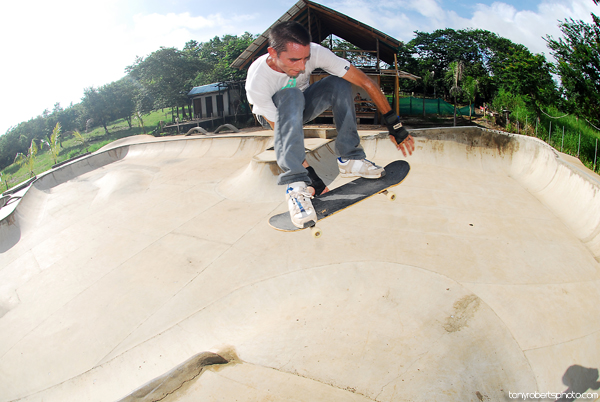 HIGHLIGHT OF YOUR SKATING LIFE: Building skateable parks in paradise!

OTHER SPORTS: Surfing and most board sports.

HOW DO THEY CONNECT TO YOUR SKATING: Flowing speed to creative freedom.

WHERE DO YOU LIVE: Costa Rica.

WHAT DID YOU BUILD, HOW MANY SQUARE METERS IS IT, AND HOW LONG DID IT TAKE?
A 700 square meter concrete skatepark. Almost two years do to finances.

IT’S IN THE JUNGLE, WHAT CONSTRUCTION CHALLENGES DID YOU OVERCOME?
Desert heat, heavy rain, flooding, odd materials, rock like dirt and the never ending sweat!

YOU ARE IMPACTING A THIRD WORLD VILLAGE WITH A SKATEPARK, HOW DO YOU SEE THE EFFECT?
Clearly in a positive way, due to community coming closer and all interested in something new and fun to do together, also watching first time skaters progress builds tons of confidence. Open to the world! 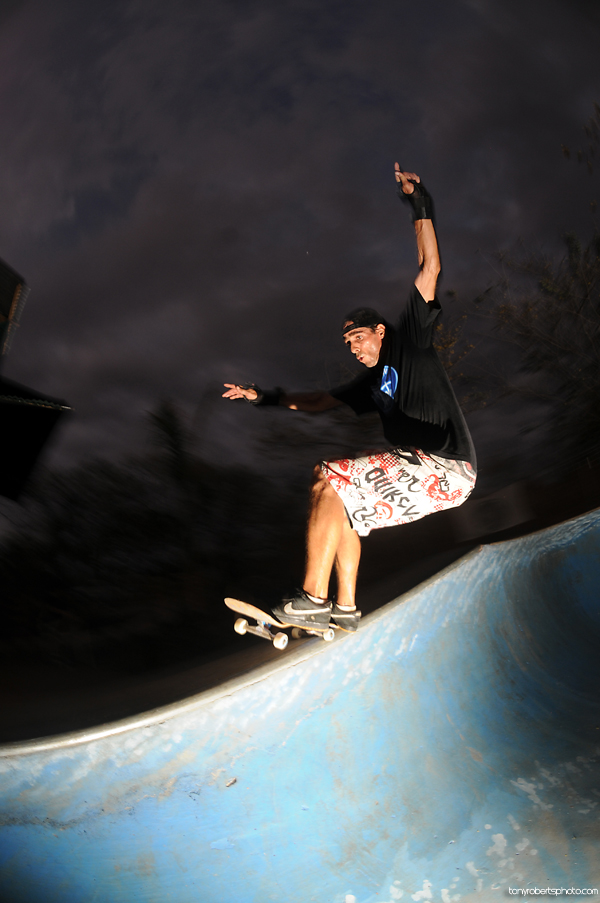 IS THIS A SECRET SPOT OR OPEN FOR EVERYONE? HOW CAN SKATERS FIND EL MUTANTE AND INFO TO COME VISIT ONLINE:?
FB – El Mutante Skatepark.

SHOUT OUTS: Leo and Gonzales families for giving me the dream, T.R, AL, the Mikes, Stello and all people that believe in dreams, keep slashing!

Some short clips directed and shot by Tony Roberts in the early 90s.
And if you looking to go on a a surf trip in Costa Rica, check out Tony Robert’s surf camp at: www.realsurftrips.com