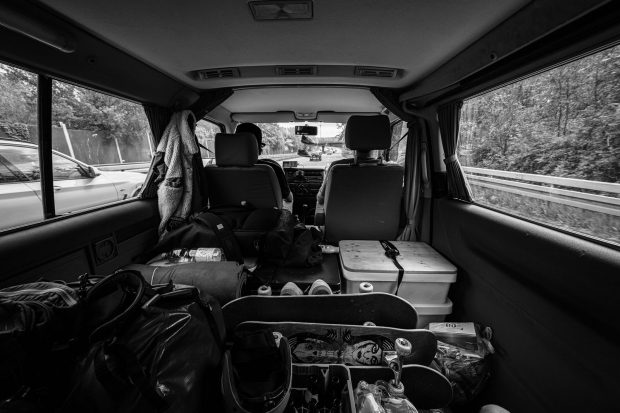 Has the Corona Pandemic only produced bad things? Well, I don’t want to be the next idiot to start an article with this stale thread, but obviously the origin of our skate trips together is due to this – for all of us drastic shit – and I have no choice but to start like that .

Seb moved to Mainz in autumn 2019 and as fate would have it, we met while skating shortly before the pandemic started.

When the first lockdown came in March 2020, things went fast somehow. Everyone looked for their “partners in crime”. Contacts were reduced and everyone focused on their small circle.

In no time at all I turned my small room under the roof into “the Cave”.  A small retreat where we met to watch skate videos and shoot countless beers because our beloved skate hall and all the bars in the city were closed. This is how we endured the long winter, staying afloat in this little bubble with a romanticized skateboarding utopia. 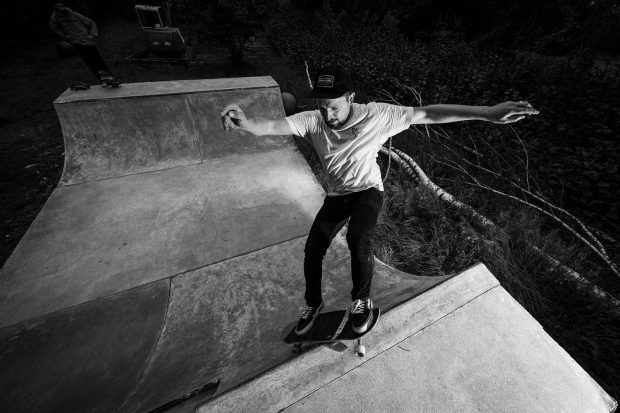 When the first loosening of restrictions came after winter 2021, there was no hesitation and we packed our vans to meet a bunch of skaters from different parts of Germany for big time celebrations and good times only in Freiburg.

It quickly became clear to us that this had to happen again next spring, because once again it became apparent that the coming winter would also be tough.

So we prepared our families for doing a repeat of the “Luserway” trip in early May.

We got our vans ready and met in the “Bürgerpark” in Saarbrücken to get in the mood for our weekend together. At this session we still had the handbrake on, because we all had the upcoming evening in our minds. After the short session in the Bürgerpark we went to Danny’s Youth Club in Wiebelskirchen. Here we were amazed. Because in the last backwater, in the farthest corner of Germany, there is a skate hall that we in Mainz can only dream of. 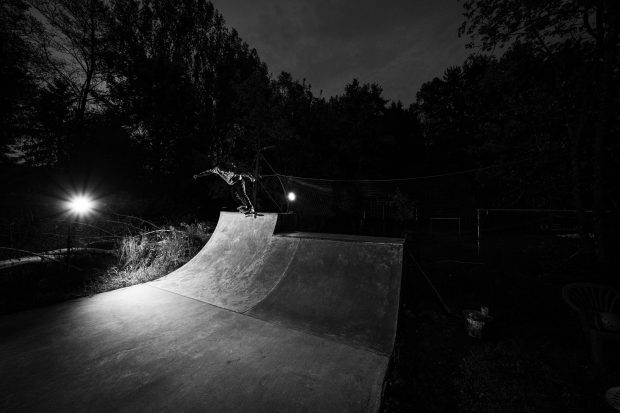 Haydar. Backside smith at the concrete diy miniramp in the woods of Wiebelskirchen. Photo: Sebastian Woerner

In addition, in the woods next to the skate hall is a small but fine DIY concrete mini ramp where the evening session began shortly after our arrival. 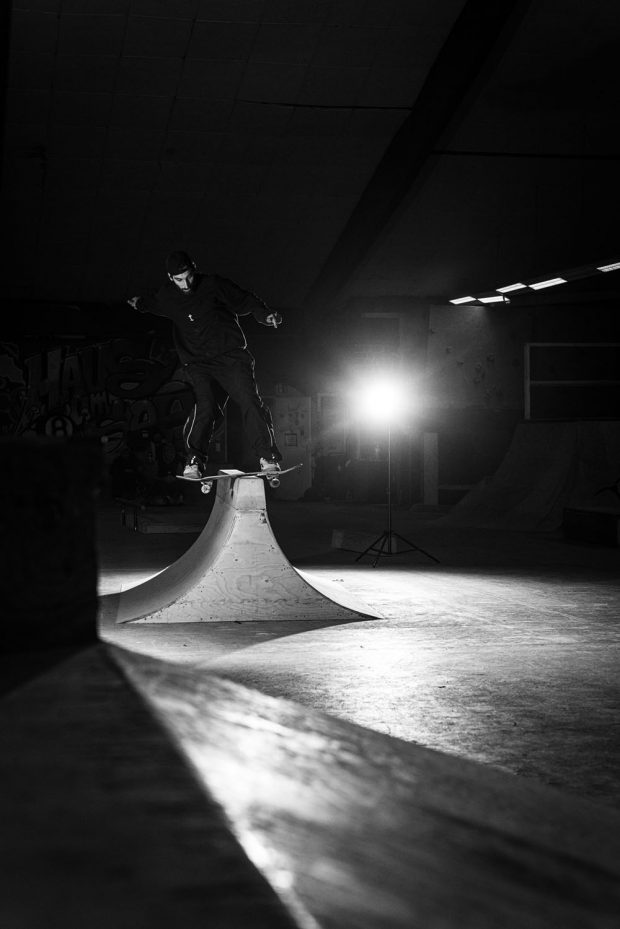 Danny started the fire in the old oil drums and a bunch of old boys jammed through the mini ramp. The atmosphere was relaxed and easy going. 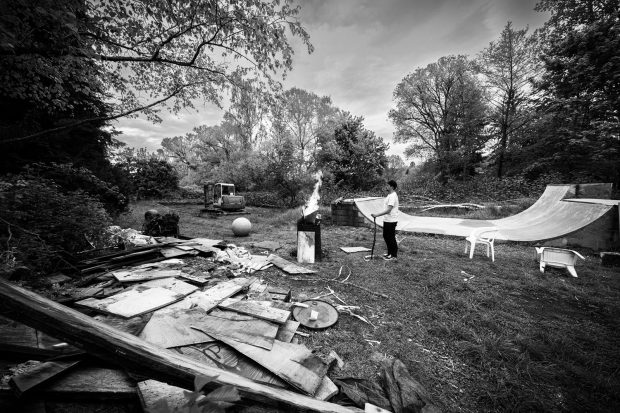 When the sun went down and the last light had disappeared, the session shifted to the aforementioned hall, with only Haydar actually being able to skate because all the rest of us have long since turned to the homage to beer. At some point the beers were beheaded so quickly that at some time the light went out in my head and I was startled the next morning by Seb’s “birdwhistles”.

I was so hung over that I had to calm myself down with reggae music.

After a hangover breakfast, we packed our things and headed to Luxembourg. Our main goal on this trip!

Fuck! It’s supposed to rain all weekend in Luxembourg. What a downer.

Ok, is there a plan B? We are in the middle of nowhere just before the border to Luxembourg. The next city where we could skate, not within reach.

Seb quickly came up with the idea of ​​going the opposite direction where it’s supposed to be sunny and warm. Close to Karlsruhe a friend of Seb built a ramp in the barn of his small organic farm, so we quickly decided to head there.

On our way, a small stop in Landau was planned, when Seb suddenly stopped at a crossroad shortly before our arrival at the skatepark in Landau. I drove my van behind Seb and wondered what was going on?!

He probably lost his way?! When the hazard lights came on, we (Marvin & Lars) didn’t think it was a good sign. So we got out and examine the car. A big traffic jam has already formed behind us when we suddenly notice the smell of diesel and a big puddle under Seb’s van…..

Marvin has his fatherly duties to attend to at this point & I (Seb) will take care of the rest of the story.

Right in front of the traffic lights in Landau, nothing works anymore and under the car everything is full of diesel… bingo! I was – for good reason – traveling with my parents’ camper because my bus was already in the workshop for repairs and now this! Seriously?

But the real shock came when the insurance guy told me on the phone that I wasn’t insured as a driver and that I had to pay all the costs for towing service, street cleaning and on and on by myself! F.U.C.K.!

(Luckily, four months later it turned out that my parents’ workshop had installed the wrong part, which was responsible for the breakdown and therefore paid the bill for €2,ooo… puhhh…lucky me!)

Well, back to the trip. 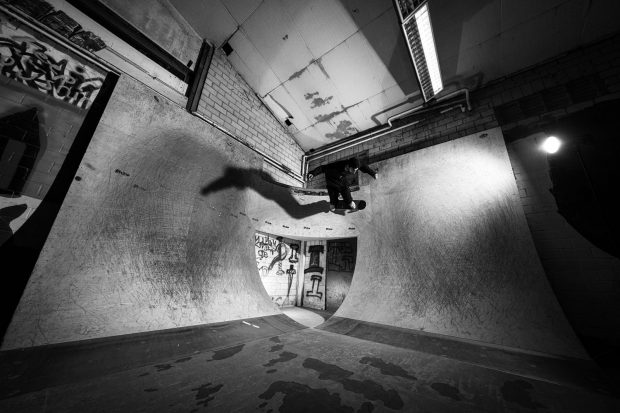 My parents bus had to stay at the towing services company, I put my “necessary” things into Marff’s van & off we go to Manu’s organic farm where the boys could repeat dealing with their hangover by having a round of boules, burgers and again another couple of beers.

The next morning we had an early bird session on Manu’s Ramp.

For breakfast, his mom (unfortunately Manu wasn’t at the Farm himself) sponsored us fresh chicken eggs and we were in absolute zen with the world.

Next stop is the east siiiidddeee mooteeelllll…  or something like that…  last skate stop for this tour was “the new bowl” in Heidelberg. Super setting, easy parking, fun bowl.

Last but not least, there was a great pizza at “Da Giuseppe” in Darmstadt, after which we unfortunately parted ways.