Heckler Magazine
“First off, if you don’t know Concussion Magazine, get hipper and search them out. They are a core group of board riders that independently publish a great mag that focuses on hardcore skateboarding with a little snow and surf for flavor. This debut video puts their print efforts on film and damn near inspires me to want to purposely slam hard on concrete. Did you think Sam Cunningham of Blockhead fame was done? Thin again. Pools, full pipes, punk, hard slams, old school Vans, Dickies, Hells Bells, Senn, Trujilo, Cardiel, Ox, Hotchkiss, Krahn, slip-on Vans, mohawks, Speyer, vert, Shetler, Burnside, Oregon, roll-ins, O’Laughlin, Farmer, ally oop corner airs, the shallow end, good times, Hertzler, Hendrix, inverts, Bailey, Eric J., and beer; if these things are not religious for you, wise up and get in touch with Amnesia. Don’t forget!” – Brian Serjun

Big Brother
The first thing I thought of before writing this review was the ending to it: “This video will be hard to forget.” That was what I was thinking of ending it with. Clever, no? I hate writing like that. Sounds like something Stone Phillips would say. And then the body of the review was going to be about the concussions I’ve gotten. I first locked up doing a f/s air over the channel at the Page Mill ramp in Palo Alto. A lot of the guzys in this video who are my age probably skated that ramp and will remember the owner, Mike, and his crazy English mohter. I woke up on the flat bottom, and, after I came to, I asked Mike if I could use his phone to call someone to come pick me up because there was no way I could drive home, but he wouldn’t let me because his mom would get mad if she knew I got hurt. Huh? So I had to sit there and watch that kook do layback airs until my head cleared up enough to drive home. God, I hate layback airs. That trick is so ugly. If I were to teach a monkey how to do a trick, I’d teach it layback airs. It’s no wonder they’ve been forgotten.” – Dave Carnie 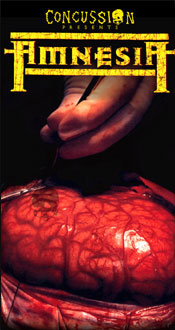 The original concept for the cover, it was going to be called Concussion the video, but we changed it to Amnesia last minute.