Burnside is the oldest D.I.Y. skate park in the United States and possibly the world. This Halloween I was lucky enough to partake and enjoy the 20 year celebration of the park. This skate park began its form during one Halloween night 20 years ago. Almost every following Halloween there has been some kind of gathering and skating at the park to celebrate its creation and existence. And this year was no exception, there was live music, interesting costumes (gay hitler to a giant sperm), beer, a ball of fire, can toss, fireworks, a mummified creature, scantly dressed women. beer, oh, and some radical skateboard maneuvers were performed also. I was a little too caught up in the moment to actually take some decent pictures, but you win some and you lose some. I would estimate that by the time I left around 7:45 p.m. there were around 100-200 people enjoying the festivities.

People form all over the world know of Burnside, not for the bridge but for what is underneath it. And underneath this bridge is known to be one of the best skate parks in the world. This park was founded by Mark Scott, Bret Taylor, Sage Bolyard, and Osage Buffalo and countless others that volunteered their blood, sweat, time and money into this ongoing project. It is very impressive that a group of individuals took it upon themselves to create and maintain a skate park that was not sanctioned by the city until recent years. Burnside has sparked many other similar projects large and small such as FDR in Philadelphia, Washington Street in California and countless other spots. But, none of these spots will ever have the reputation as Burnside does. Burnside is privately funded and relies on donations to keep maintained and growing. 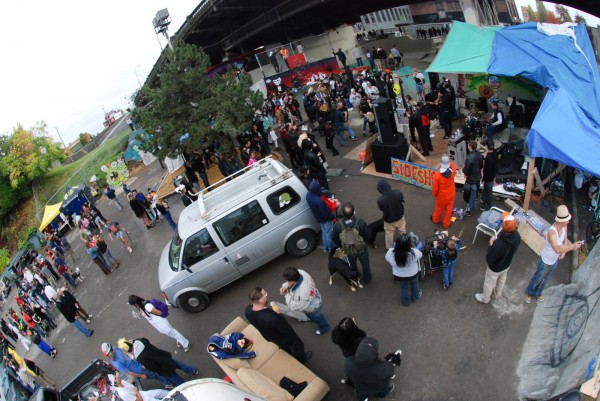