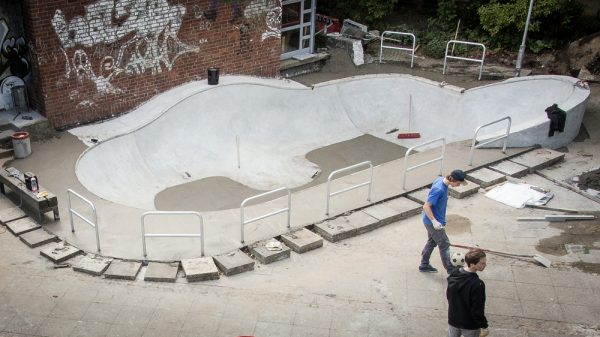 Hamburg has always been an epicentre of the german skate scene, but as far as concrete skateparks go we’ve been like twenty years behind the rest of the world for ages. But those days are long gone now and during the last year alone we’ve had some kind of concrete explosion with six decent new parks having been built mostly courtesy of Minus Ramps. But now I wanna tell you about the newest bowl addition which was built in May in some kind of professional d.i.y. style by Hamburg locals themselves.

In Hamburg-Eidelstedt, a district about twenty minutes north-east of the city center, there’s a youth centre named Ackerpoolco, which is run by longtime Hamburg skater Georg Becker. Some 15 years ago he managed to persuade the officials that it wouldn’t hurt to have a quarterpipe in the big event room they have in that building which then over the years turned into a real skatepark with ramps, kickers, rails and curbs, all movable and always changing. It’s a small but really good alternative to the always overcrowded I-Punkt skateland, which celebrates its 25th anniversary next month by the way. But Georg is not one to be satisfied with wooden ramps in an indoor place and wanted something that the kids could skate on the weekends when the Ackerpoolco is closed. And after all his years working in that social youth center business he knows how and where to get some money from the city to build more skateable terrain. The logical next step: Concrete.

So last year plans were made to build a small concrete bowl in the big front yard of the building, and though it took some time the city finally gave the green light on 10.000 euros for exactly that. This spring plans were turned into reality and I was chosen to be the one responsible for the actual building with the helping hands of the local kids, skaters and everyone else who was willing to spend some time and energy on this project. To me these are just the perfect conditions, the city offers money and a place, and we as skaters can pretty much build whatever we want. It doesn’t get any better than that, I guess. 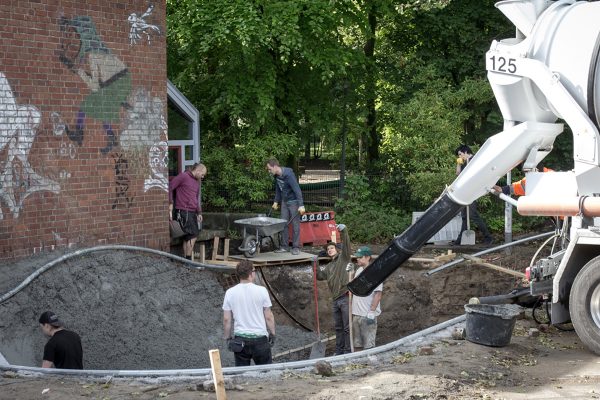 From the very start it was Georg’s plan to build a small bowl not too deep that would be good for younger kids and everyone else who wants to learn some carving and bowl skating. Because of drainage pipes we couldn’t go deeper than one meter anyway, so the plan included a bell-like extension and a taco corner which we even raised half a meter after the main digging was done. Everyone in this business knows that things might look good on paper, but should be changable during the building process which is exactly what we did. Other features are a small speed bump in the middle mostly to avoid miniramp style skating and a tight corner with some coping blocks. 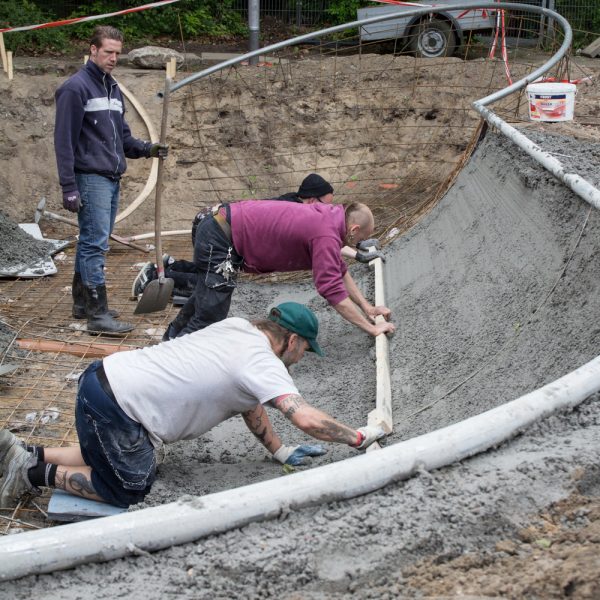 Since the digging was done by a professional company and did cost almost half of the budget we had to improvise quite a bit with the actual bowl building. And a concrete pump never was an option anyway, because from the very start it was clear that there would be more helping hands than money, so it was all shovels, wheel barrows and hand stacking. And considering that I was the only one with experience in concrete bowl building, I think, we did quite a good job and some decent sized pieces with only four days of concrete. Speaking of that the local concrete factory which is just around the corner was so kind to give us half of the 18 cubics needed for free since it was a social project in their direct neighborhood. That helped quite a bit to not overextend the budget. Thanks a lot for that, folks!

All in all, the bowl turned out great and I can say it was one of the coolest projects I ever had to deal with because of the general good vibrations and the proof that d.i.y. and a city can work hand in hand, even in a metropolis like Hamburg. Thanks to people like Georg who fortunately is in a position where he can actually get some shit moving and done, things like this are possible indeed. And, I hope, this might be an inspiration for other youth centers in Hamburg or the surrounding areas to follow this step and get something really good for a relatively small budget. Actually this is the best way to go. Let the skaters build their own shit, but pay for it. It just doesn’t get any better than this. 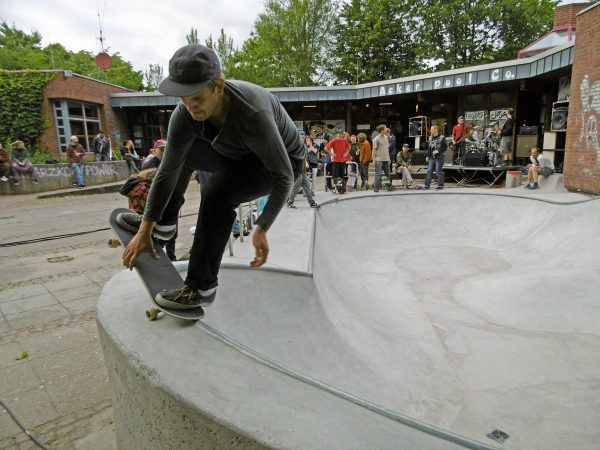 Karsten is about to Fs Nosepick

Big ups and thank you to Georg who never seems to slow down and the Ackerpoolco staff Steffi, Olli and Vanessa for being great hosts and open minded people. Thanks to Julian, Böller, Jerome, Benni, Elena, Manu, Vic, Jan, Karsten, Norman, Philipp and everyone else who came along for a day or two to help with work and positive energy, it was my pleasure, thank you all! Knowing Georg it will only be a matter of years when the next money should be flowing and we will turn the rest of the frontyard into a skateable front yard. But first the next step might be building a roof for the bowl, though, since the weather in Hamburg tends to get ugly at least half of the year.

Benni and a Fs Tailblock in the taco pocket

The opening took place on Saturday, June 20th. Unfortunately, a lot of the crew were out of town building a ramp for the Fusion festival, but it was quite crowded nevertheless and the session lasted until dark which it rarely does here up north at this time of the year. It was cool to see some people skate something that they actually built themselves for the first time, some hard maneuvers were done and everyone had a big smile on their face. We even had two bands playing next to the bowl which is always special and always will be a skater’s dream or at least the best case scenario for a session. A big salute to Kaos Kabeljau for some good ol’ punk rock and Breakstuff for some early Chili Peppers style funk rock. Job well done! The officials were impressed and happy and we all had a jolly good time and were left craving for more spots and events like this. If you ask me, anywhere, anytime… 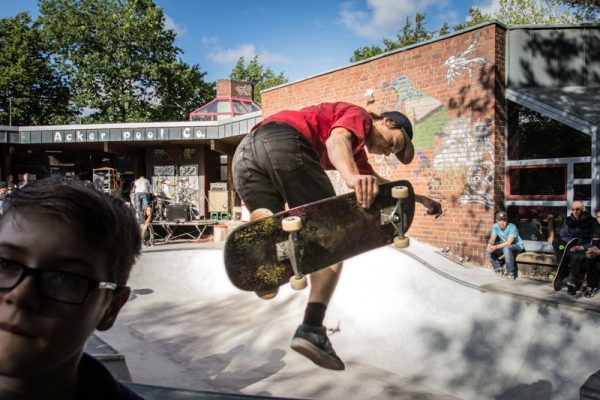 Not a Judo air but a Bs Boneless by Benni

P.S.: Not to be forgotten, during the building process we found some time to pour some more ‘crete at the Flora Bowl where we closed the last missing corner at the entrance of the upper level. This opened quite a few new lines for that part of the park so come along and check it out, the Flora is always worth a visit. And since the city bought the Rote Flora last year it looks like this place is here to stay which has not always been the case. Dude, screw Berlin! Hamburg is sooo hot right now. Always has been, always will be…

Kaos Kabeljau is rockin’ the punk

Camdon with a sweet Boneless To Tail 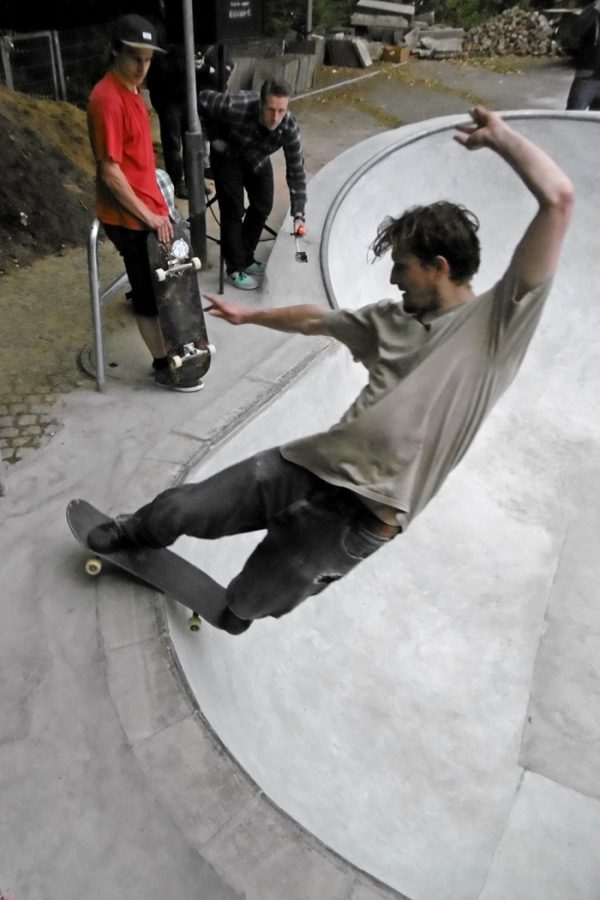 Harris styles a Fs Slide’n’Roll through the tight corner 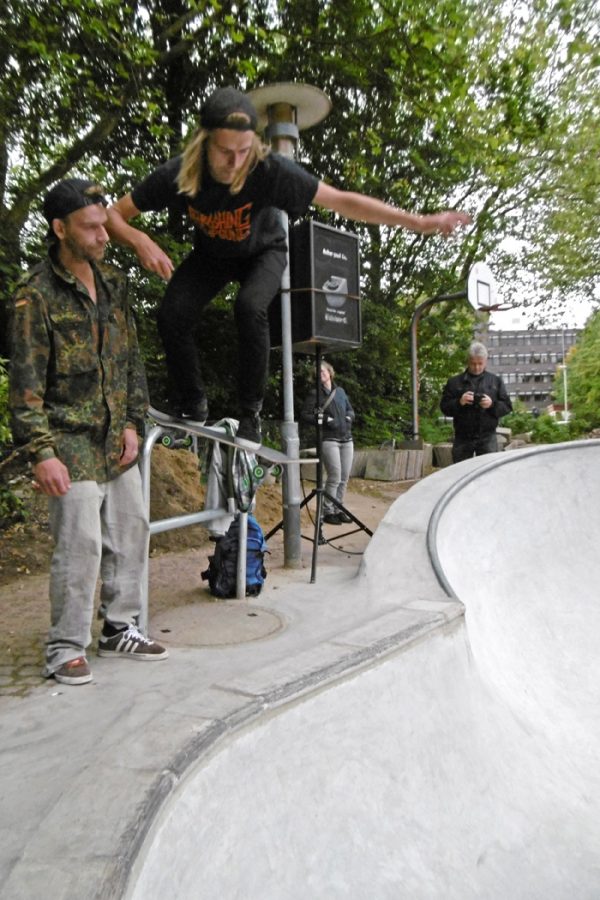 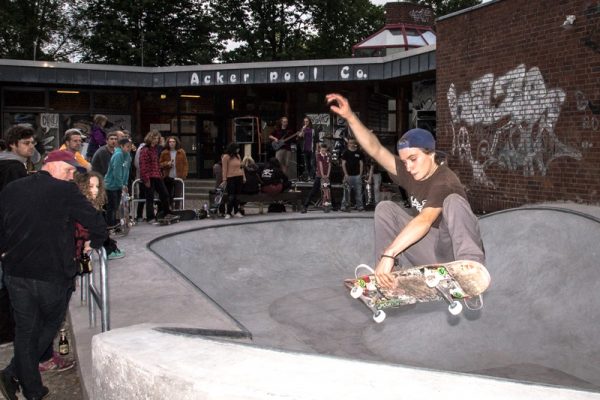 Camdon and his Fs Air, watch out for this young gun

The new corner on the upper level at the Flora Bowl