Except for this contest.

Billy Runaway set up a contest in Palmdale, CA called the GREAT DESERT POOL DUEL. This contest was invite only and featured a real backyard pool over ten feet deep and a bunch of underground and not so underground rippers. Add to the mix free beer from Black Star and with Lance Mountain and Dave Hackett as guest judges, this contest was worth getting up at 5 am to drive four 1/2 hours to get there. So the bottom line was: backyard pool and beer and no city officials. This is what skateboard contests should look like. – Jamie Camp

Ryan Johnson. FS ollie in the deep. He did a backside ollie over the huge set of shallow stairs to win best trick over the stairs 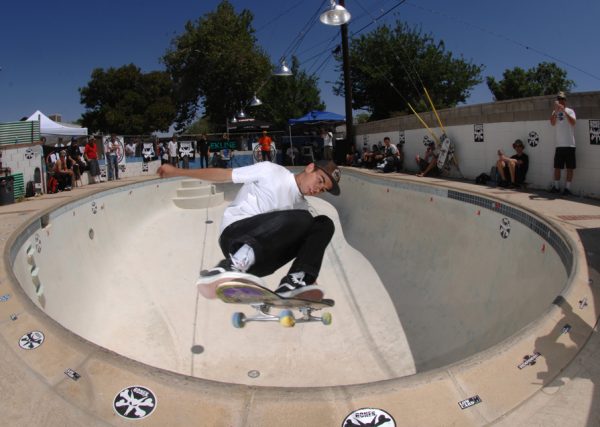 Al Brunelle - just before doing a sweeper disaster hangup to head slam. He was taken to the hospital, hear he is doing ok now. He was ripping all day.

Palmdale local. Backflip off the roof to the ground. It's a make.

When all was said and done the results looked like this:

Best trick of the day contest:

As word, photos, and video of this inaugural event get out, I am sure next year will be bigger and better. Thanks to Billy Runaway and all of the Palmdale pool project for putting on a fun event!