“The best advice I could give anyone is, “get it while you can.” As much as I’d like to believe that possibilities are endless, many opportunities depend on specific windows and even exact moments in time. That lesson is often only learned by the pain we endure when we’ve recognized that we missed it. The best thing we can do with that pain is let it guide us to see those moments while they’re happening, and strike before they slip us by.

I was hit with that feeling again recently when I had seen online that the Hell Track DIY locals were gathering for one last get together before it’s destruction. The excavation machines were in place, and the new land owners said that the whole area was getting flattened on Monday. I watched my phone in awe as the final tricks at Hell Track were being posted throughout the day. When the sunset clips of everyone having beers around the burn barrel went up, I couldn’t help but feel like I could and should have done more to have been there.

I sat with that feeling for the rest of the week, and on the following Monday I saw someone post a clip showing it was still there. I immediately hit up Justin Mondschien, explained the situation, and tried to organize a photo shoot. Given our schedules, Wednesday was the earliest day we could get together. We both knew that even just those extra two days passing would likely lead to us walking up on a pile of rubble, but it’s the hand we were dealt.

Call it fate, luck, or simply the benefit of my own stupidity, but the weather was so nice on Tuesday that I ended up losing track of time and was late to work. When I called in, they told me to just stay at the skatepark. Almost immediately after the call, Justin showed up to the park unannounced with all his camera gear. He said he was hoping to run into Chuck Treece, but with Chuck having left already he asked if I was free to head to Hell Track. I hesitated, but Justin threw it out there that if we left at that exact moment we would have enough time to get to the spot within a full hour before sundown. Within a few minutes we had recruited some friends from the park and had a caravan heading to Hell Track. 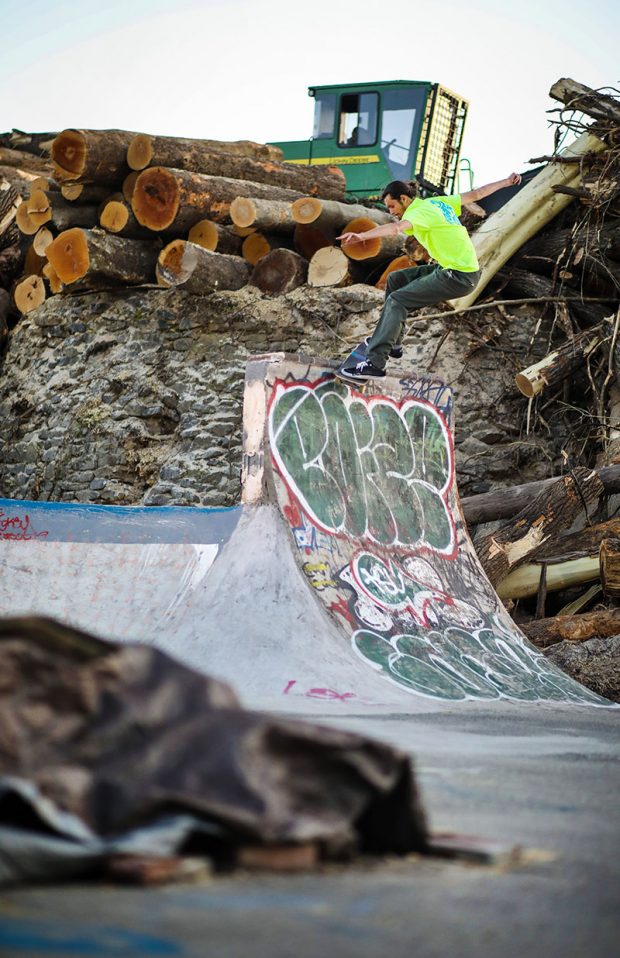 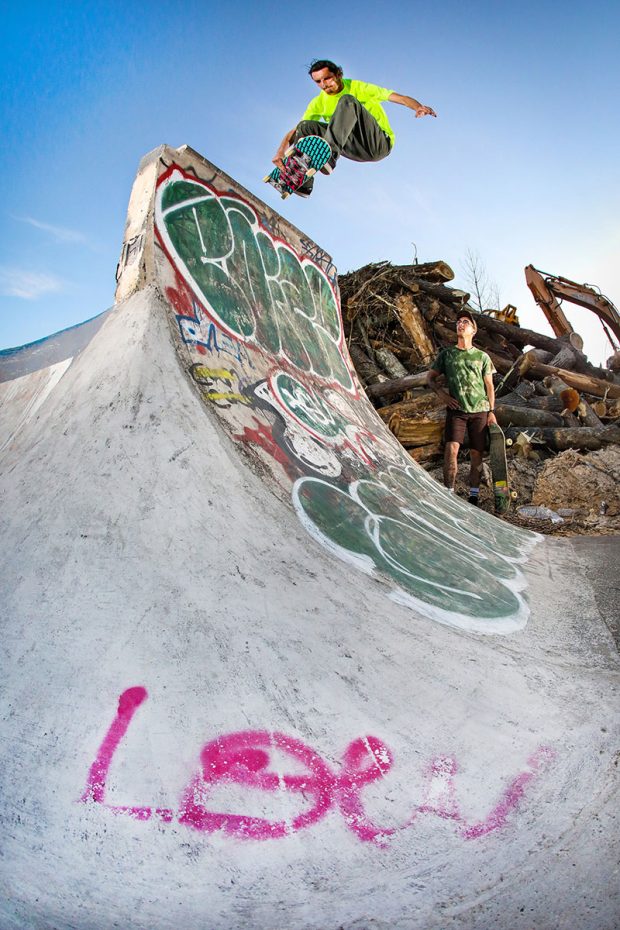 The spot was originally surrounded by a giant patch of woods so thick that walking up from the back would require almost twenty minutes of working your way through mud, thorn bushes, and an overgrown mess of north east woodland headache. When we pulled up the whole forest was gone. It looked like World War One. There was nothing but a hellscape of excavator tracks in an uneven field of mud. We couldn’t see any of the DIY from where we were, so I started venturing into the no-man’s land they created. As I got closer I climbed to the top of an unnatural hill, and from there I could see the top of the vert wall still standing. 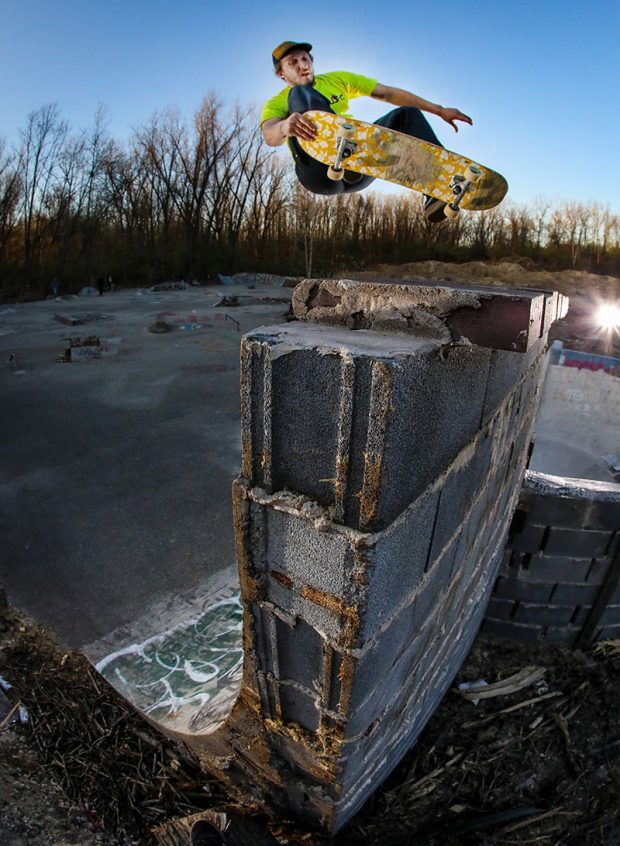 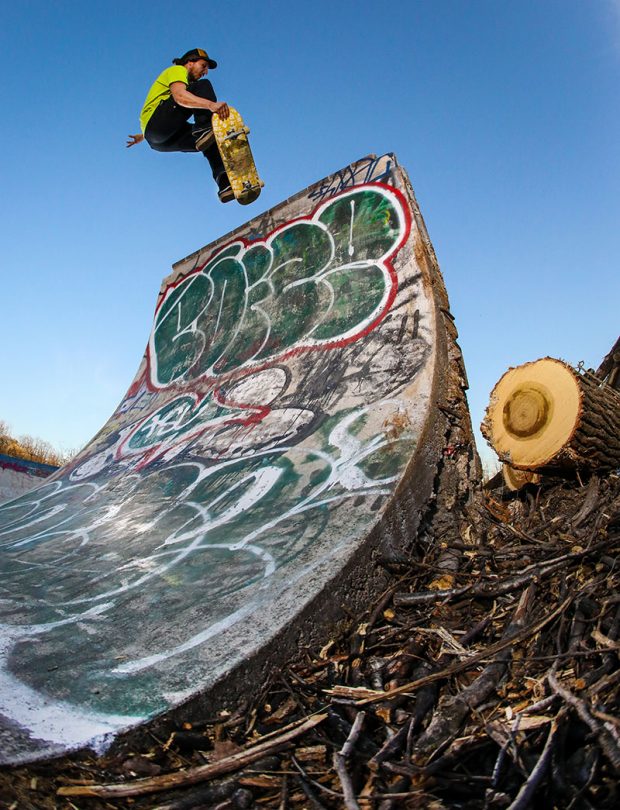 It was hard to believe what I was looking at. The ground we were walking across looked like they used bombs to clear it out. As we got closer to the concrete foundation Hell Track was laid on, we could see the giant trees they ripped down all stacked on the other side of the DIY. The tree carcasses were laid up along the hill and seemingly stacked intentionally where we used to park our cars, but it didn’t make sense. The amount of effort they would have had to go through moving the trees to the other side without ripping the DIY down seemed idiotic and wasteful, but as confusing as it was, Hell Track was still alive.

The spot was empty when we got there, but as Justin started setting up his lights the locals started trickling in. With the trees and ominous excavators parked in the background we knew the vert wall was the main thing we wanted to shoot on. The backdrop spoke of nothing but impending doom.

The original dimensions of the wall came to Joey Flora while he was knocked out. When he woke up he wrote them on some stone slabs. A week later the stone slabs were washed away in a flood. Whatever the original idea was might have been easier to skate, but the wall ended up being something around eight feet tall, only four feet wide, with no deck, two cinderblocks of vert, and brick coping that had some serious reveal. Needless to say that thing was intimidating, and had real potential to toss you eight feet to flat. You also had to run at it full sprint every time to reach the top with only one small bank to pump, so on a normal day I wouldn’t have had a lot of motivation to take it on, but the sun was getting lower by the minute. 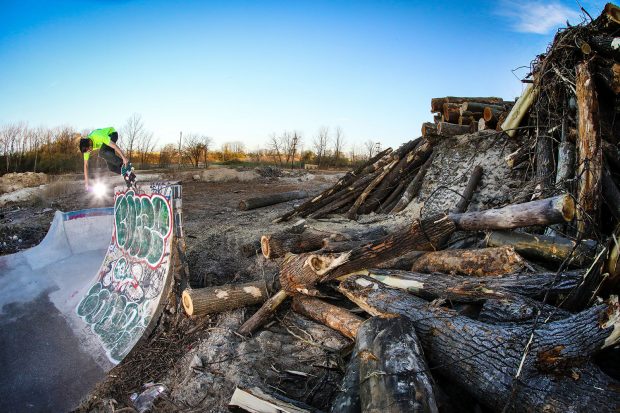 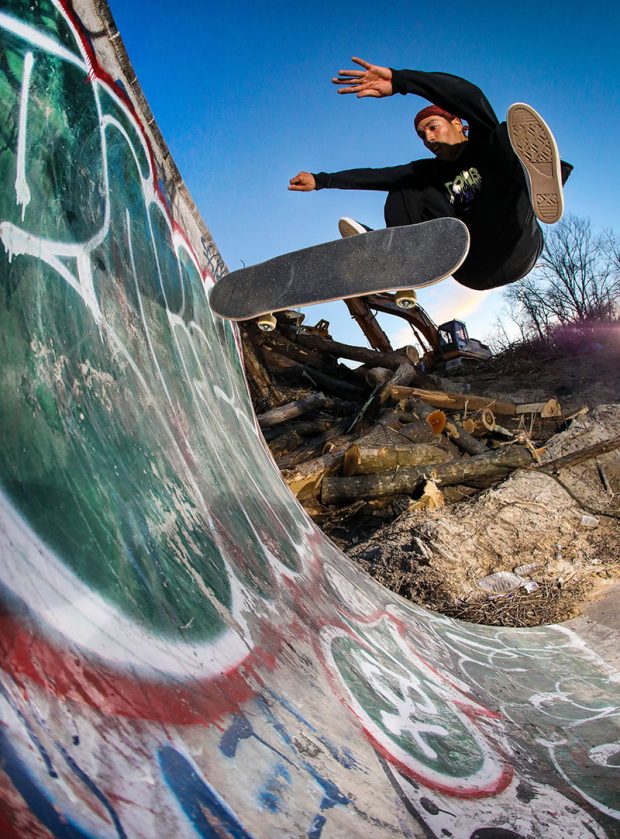 I got a few warm up slashes out of the way, and decided to start going for a smith. After a few attempts that were almost completely void of actual effort, Sean Kirkpatrick showed up and started running at it with me. Sean was one of the main people I knew who built, and skated down there. Straight off of work and straight out of the truck, Sean was going for lien tail. I feel pretty strongly that if you show up to a DIY that you haven’t built or donated to, your required payment to the spot is shredding and stoke. So when Sean looked at me and said, “Right here Evan, start it off”, I knew it was time to pay up. As I fully stood up on top of the smith, I looked down through my legs, pulled the trigger and brought it in. While rolling away Sean ran past me, bonked his wheels of the brick and made the lien tail happen back to back. 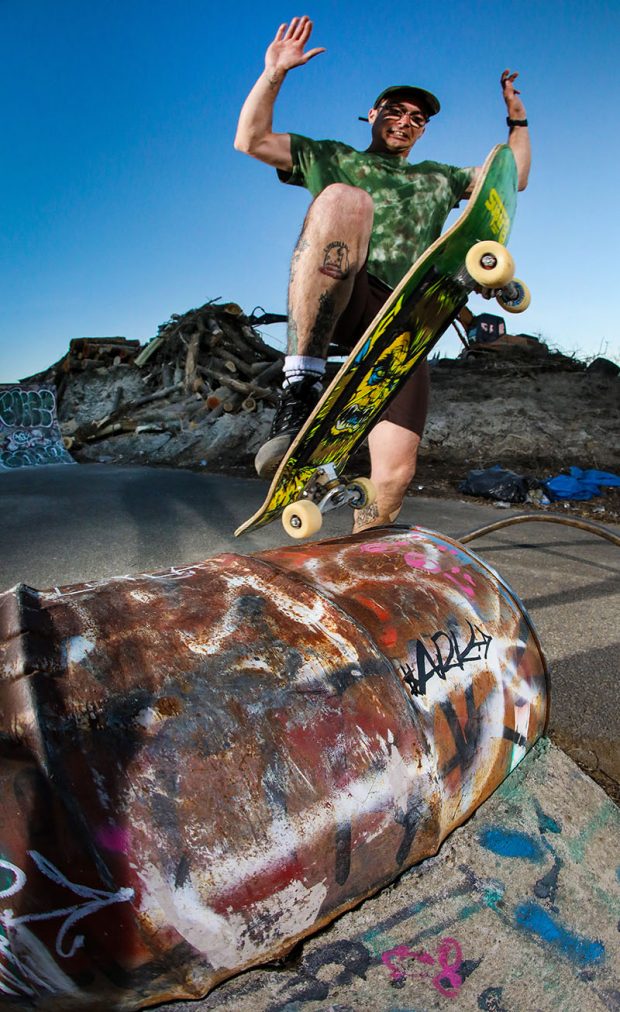 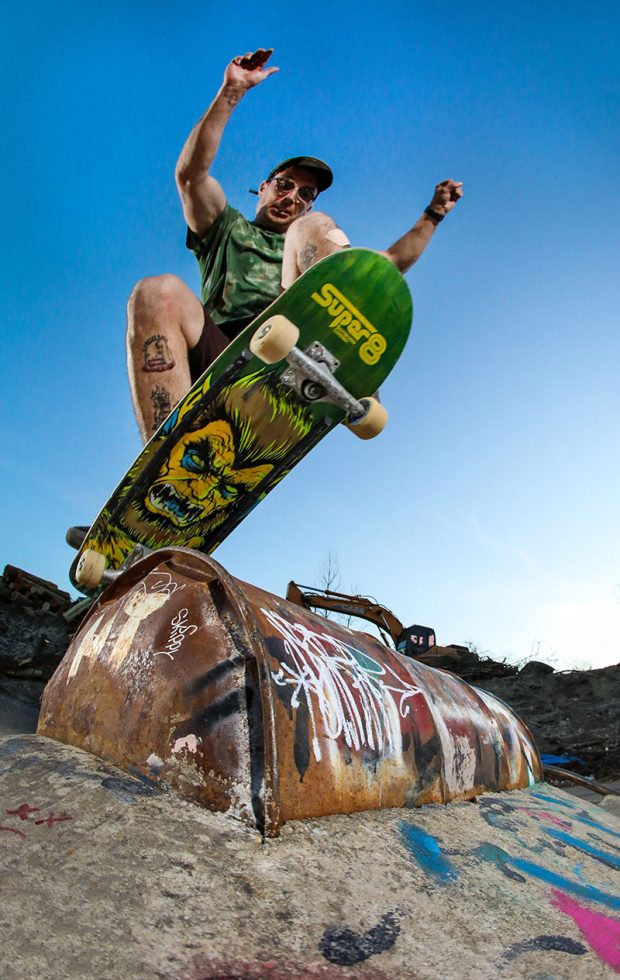 Cody Hamilton grinding over the barrel

I ran through a handful of other tricks on the wall, but when the light started getting low I decided I pressed my luck with the vert wall for long enough, and called it a day. Justin and my friend Cody Hamilton moved on to shooting on a barrel that was cemented into the ground as a wallie obstacle. The barrel was one of the oldest builds at the spot, so we thought it was a cool homage to our final session there. The noise it made during every trick could classify that thing as a musical instrument. Cody got his last trick with only a few minutes left of light, which was the perfect amount of time for Justin to move his lights back to the vert wall and capture one last shot of Hell Track local, Enrique Santiago. In just a couple tries, Enrique threw up a perfect frontside flip and rode away with the final photo of the session, and possibly of the spot’s history.

As we packed up the gear the locals were cracking beers and reminiscing. Some catching their last few twilight slashes, and others slinging mud with their dirt bikes and four wheelers. It was clear that beyond the skate stuff itself, one of the biggest losses that would come from Hell Track’s demise is the loss of a place they could call their own. It was a place built by a small crew, with their own tools, and money. It was filled with experimentation, learning curves, and the drive to create. Hell Track was the epitome of DIY. Skaters who built something for no other reason than for themselves to skate. 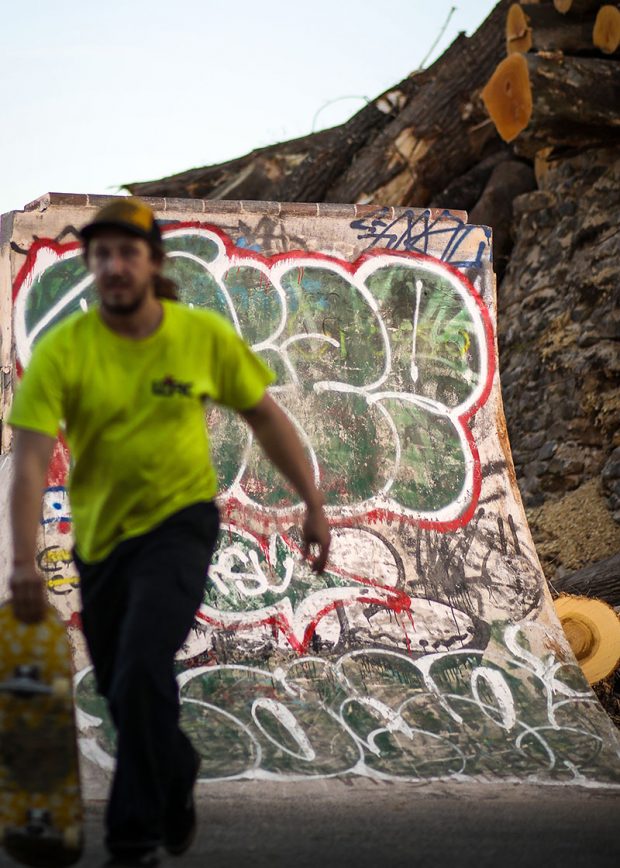 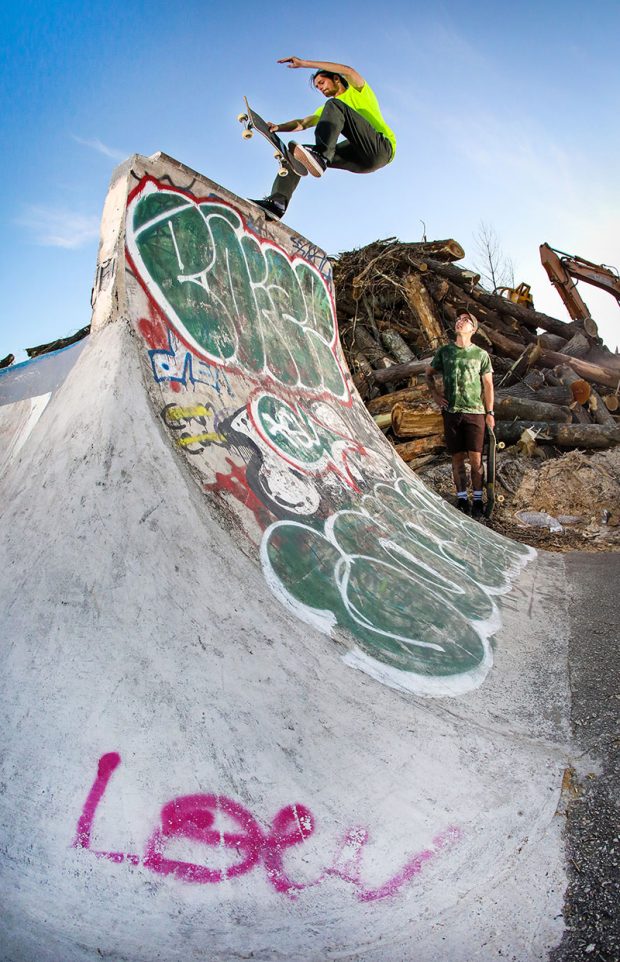 After consulting one of the locals on who should be thanked, he told me that there is no list of names to put up. Everyone who was part of it knows it, and much more important than being part of a list of names is the concrete that was mixed, the blood that was shed, the laughs that were had, and the time that was spent. The single person I was asked to mention was Abe Howell because without him, nothing ever would have happened there.

Thank you to everyone that built here, everyone who skated it, Justin for coming out to shoot, and Jonathan for giving us this opportunity.”  – Evan Breder