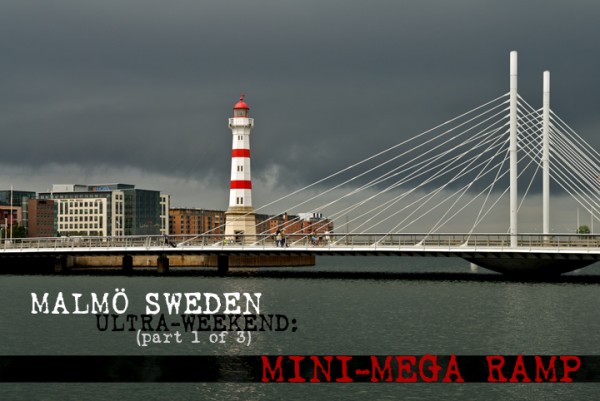 Once upon a time, in a land not so far away, August 21st in Malmö, Sweden to be exact, they held the MALMÖ ULTRA-BOWL II, where they invited skaters from all over Europe and the USA. The event was two days long in the backyard style pool at the Stapelbäddsparken skatepark. This is the ‘main attraction’ of all the events they hold in Malmö each year and this year truly had the most amazing skateboarding I’ve ever witnessed in person. I left Köln, Germany mid morning with my accomplices Alf and Pilik of Impakt Skateboards who had never been to Sweden before. We arrived in Copenhagen in the early afternoon, just in time to hook up our boards (you have to dismantle them to fly on the cheap flights) and then take a train across the water from Denmark to Sweden. From the main train station, I made my usual tour: stop at 7-11 in the river harbor for some Swedish beer (even though they only have the 3.5% at 7-11) and then to Stapelbäddsparken to see what we would find.

Ran into the usual suspects – organizer John Magnusson, photographers Nils Svenson and David Östlund, and Concreature Dave Toms. German rippers Kevin Wenzke and Anders Pulpanek were warming up in the backyard pool before the main event the next day while being documented by Gerd Rieger, but overall it was pretty mellow. Turns out there was a mega mini (or mini mega) ramp jam about to go down in front of where we were staying, so we got our photo press passes and our hotel info from J. Mag and headed back the way we came. 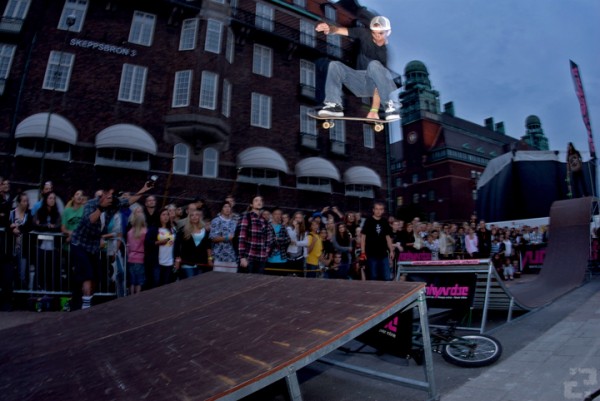 We didn’t have a chance to book into our hotel as the jam was already full underway when we arrived. I stashed my stuff, pulled out my camera  and shot some of the action. People were winning Kronor like it was Monopoly money, and in a way it is, because it’s about 10-1 with the dollar, so winning 200 kronos for a 180 ollie seems super rad until you realize it’s only $20, but still, people were racking up some semi-serious dough by the end of the session. Mike V walked away with the ‘grand prize’ even though he didn’t think he deserved to win. He almost landed on me trying a 360, that was kind of exciting. It would have been more exciting if he started to beat someone up or started smashing some shit, but despite all his over hyped media coverage over the last decade(s), he was super chill and not some blown out skate-rock star.

Standouts of the mega-mini ramp were Fernando Bramsmark who pulled a stalefish late shuvit, Mike V with his Christ Air’s and Backside 360, and Ben Rayborne with an assortment of crazy tricks, like the air to butt ride and also some 360s and just general radicalness. Everyone who was skating was basically ripping though, Josh Mattson, 16 year old Emma Lindgren from Malmö who is a total ripper and digs holes in dirt and helps slap concrete around for the new DIY park, Steven Reeves with his one footed ollies, Frank Faria and Benji Galloway, and David Stenström, a grom from Stockholm who was holding his own with some stylish airs over the gap.

So the megaminiminimega was over and we went to check in our bags in our hotel, then headed onto the streets because it was some kind of Malmö street fair. Nothing too exciting, just food huts, some cheesy rock bands and  little shop stands, but the streets were packed. Just walking around with some beers checking out the sites was entertainment enough. I witnessed some of the younger german dudes get hassled by the Swedish pigs for drinking in public, but the cops seemed to be even more pussies than the german cops, so no one got in any trouble, just a warning and a passport check (i wonder what would have happened if they were like me and didn’t carry their passport around with them?.. Probably nothing). 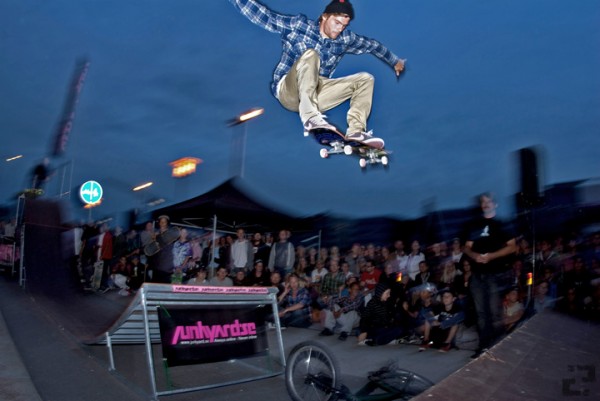 The night wound down at a bar a stones throw away from our hotel, where we discovered most of the crew were lurking out drinking some good english ales, lagers and stouts. Ran into PigPer, Linus, Pontus, OMSA Dietsches, Keith from Addikt skateboards out of Venice, aussie Chookie, Tobias, Pyssling, and I can’t remember who else but you probably don’t care anyway. Basically, it was a fun party at the bar and then they shut down the beer taps and the night was over. The next day was to be the first day of the Ultra Bowl followed by a secret night session in the wasteland’s of Malmö!  [photos + video coming soon…] 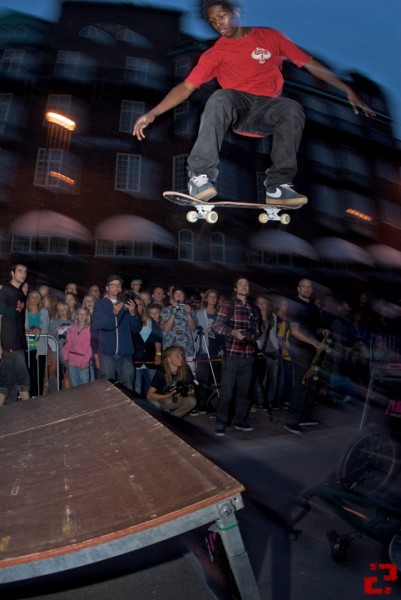 An older Swedish dude (??) was trying to huck 360s but just slamming. I think he pulled this one footer though.

Fernando Bramsmark doubles with board holder Josef Scott on this nose bonk transfer.

Fernando Bramsmark. Melon Grab, or Sad grab as they say in Sweden.

Mike V backside 360. The one he bailed before almost landed on my head. Fishin' can be sketchy. 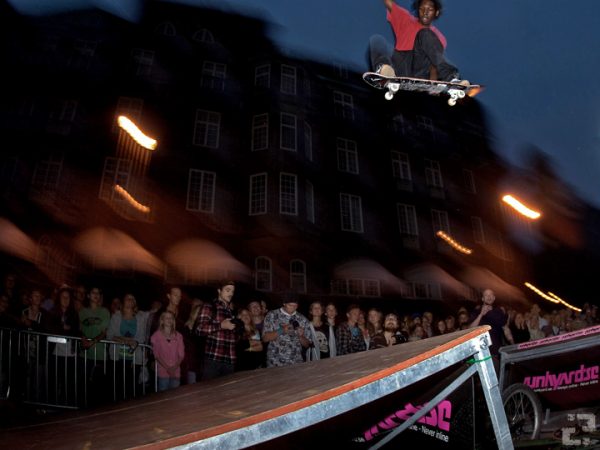 Fernando Bramsmark. Huge Stalefish. He also pulled a stalefish late shuv-it after I put my camera away... kinda gnarly. 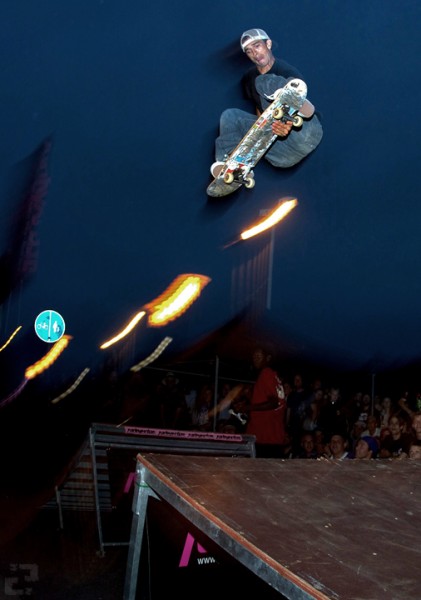