I started going to meetings and pitching the idea for a skate park in my home town of Valley Center, California about five years ago. At that time they, parks and rec., said there was no money for something like that so I didn’t pursue it for another year, until I saw a sign for and new sports field to be built. So what I did was instead of going to board or Parks and Rec I had my boys Daymein and Gunner and friends stand on the corner next to the new sports field with signs, saying “we don’t need another sports field, we need a skate park”, that got peoples’ attention and they start talking about it, and we got 200 signatures, got the community into it first, then I took it to the board of Valley Center, the signatures, and packed the house with supporters. The board was a little overwhelmed, they said they would get back to me asap, next day I get a call from the head of park & rec to have a meeting.

At the meeting he said they still don’t have any money to do somthing like that, so I asked what can you do? Do you have land? He said yes, so I proposed that if he could donate the land I’d get a skate spot built. I had to go back to the board and pitch the plan. The plan was, I would donate my boys’ back yard ramp so we could have a fundraiser at the site of the skate spot – 4 ft. with 8 ft. extension to raise the start up money and donations of labor and equipment. Board member requests were that I had to start my own board with members and put up a fence for separation from the parking lot. I agreed to do what they wanted but first to have a fundraiser and I needed to build the mini ramp. They OK’d it. Five days later we had the mini ramp up and planned our first event. Thanks to my boys, I knew some pros and people  in the skate boarding industries that helped out big time: Jake Brown, Neil Mims, Jamie Thomas, Steve Clair, Mouse grip, Ryan Reid, Jake Orion Trucks…  too many to list but I want to give them a big THANK YOU. The event went off, we raised about $3,000 in cash and thousands in labor and equipment donations from Kyle Gallagher and crew, finishers, bob cat and dump truck from Mike Dennis trucking, concrete pumps from Cory miller and Rick Rogers, and whatever else we needed from Zack Smith plumbing. They have been a big part of this project and all the labor from Tom Turpen, Todd Gibbs, Leon Golf  too many to list but that’s how we’re getting it done – fundraising and equipment and labor donations, and yes, we’ve had our ups and down with the board of Valley Center. We try to comply with them and work it out if they have a problem, but I will say if you have the majority of the community behind you it make things easier. We built this skate spot as we raised money for crete all diy – no blueprint – we get money, we build, and no real plans on what. We talk it out as we raise money, by the time we have enough to do a pour we get the crew together and form and pour and the design comes from the land scape. 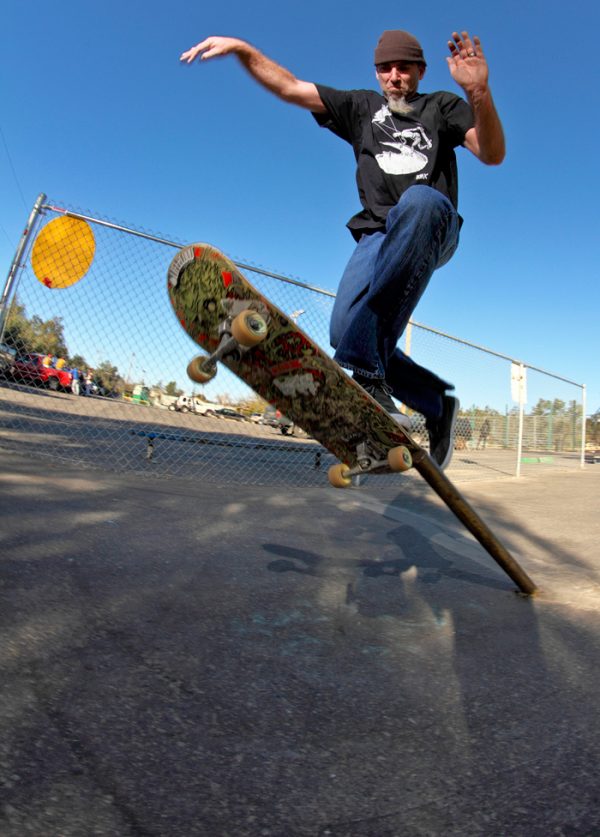 5 weeks ago – forming and steel.

Mark Hertenstein working in the rain.

Kids learning how to work for their skate spot.

Kyle Gallagher and crew came out on a days notice and poured at no cost.