On an unseasonably sunny and warm day, original 1970s skaters busted out laybacks, handplants, and airs in the clover bowl while the tunes from the era blasted out across the park. 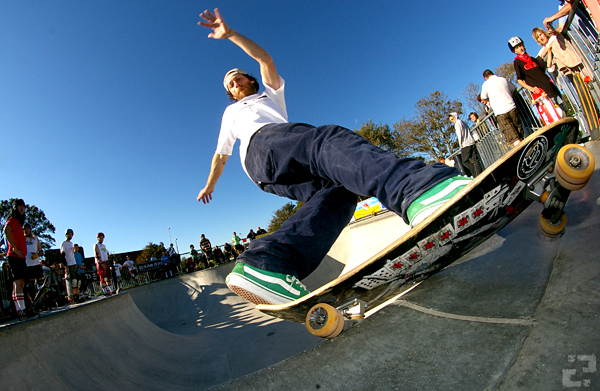 With the emphasis being on having fun, riders dressed up in full ‘70s skate regalia: long tube socks; short shorts and rector pads were the order of the day. Donning wigs to ride the bowl, for many of the older guys the most nostalgic part of the event wasn’t the old skate paraphernalia but the recollection of what it was like to have hair.

There was a marquee with photos and articles about pool skating at the long-gone local Barn skatepark, featuring some of Brighton’s original “Pig City” skaters. Former pro-skateboarder Ben Liddell donated photos of the Barn from 1978 from his collection.

An exhibition of 1970s skateboards from local skater Tony Lord’s collection proved particularly popular as people fawned over some of the original gear.

For all the nostalgia, equipment has moved on, and only the bravest of skaters were prepared to drop and ride the bowl on the old boards that people had brought with them. Special mention has to go to 14-year-old Harry Phelps who managed to rip in the bowl on every ‘70s deck that was thrown at him.

OG skaters putting the bowl through its paces included Mike Day, Paul “Dicky” Davis and Matt Bain. Some of the original Pig City riders from back in the day, Jock Patterson, Tim Dunkerly and Phil Earl also put in an appearance to support the event. But it was left to 17-year-old Oakley Liddell to show the older guys a thing or two with some of the best runs of the day.

Des. Frontside over the DEATHBOX

The event was sponsored by Ocean Sports, Independent Trucks, Santa Cruz, Shiner and Vans. Adur Council supported the event. For information about future events and the skatepark see www.shorehamskatepark.co.uk