The Cachagua Land project is a DIY “skate park” that Zarosh has been working on for the last few years. Friends come out to the land, deep in the Carmel Valley in central California to bring concrete, help dig, build and skate the ever morphing concrete contraption. The project is a work-in-progress as cinder blocks, rebar, parking blocks, man holes, and hundreds of bags of concrete are collected piece by piece and bag by bag. 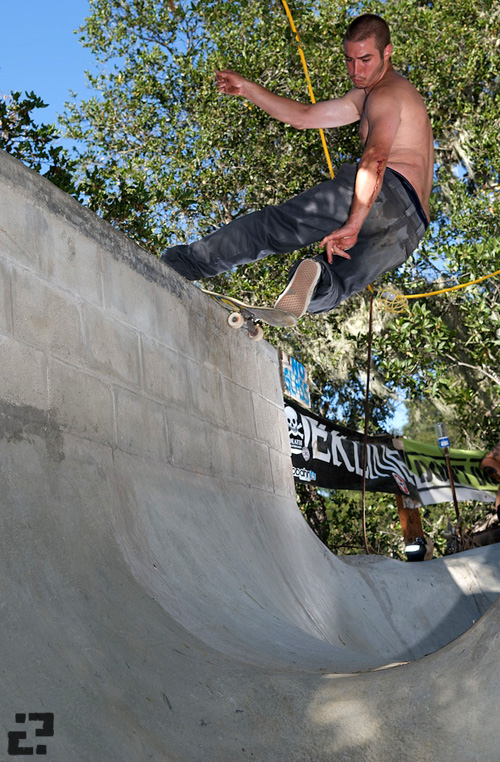 On this occassion, the MxMxM crew (Magical Mosh Misfits) from Japan were on a Nor Cal tour with their guide Maru. A crew about 12 deep, they hired a van and drove from San Francisco, south to Santa Cruz, then from the Consolidated warehouse in Santa Cruz out to the Zarosh compound.

Shige, fs tailsliding the cinderblock vert wall over the saddle.

Unfortunately, Zarosh had a broken ankle so he could only skate a little. I brought with me Adam Benson from Delaware who had recently moved out West and had been asking if he could come along for the next session at Zarosh’s. So when the opportunity arose, we seized the day and a session went down in the blistering Carmel Valley sun.

Adam Benson 5-0 grinding the vert wall over the saddle.

For another video I filmed last year (including an interview +skating by Zarosh) check out this video on Globalboarding.tv

Check out Zarosh’s other projects and learn how to donate to Cachagua land on his new website Platipusskateboards.com