Ikaria is famous for it’s laid back attitude and it’s Dionysean summer festivals with wine song and dance. Recently it’s also become popular for it’s surf, due to a local phenomenon which generates an afternoon windswell.

Now I’m a greek-surf cynic, so when I discovered a mini ramp on the surfy beach where we planned to spend most of August I felt a genuine jolt of excitement. This was short lived however as we soon discovered it was in the kind of condition a flimsy wooden structure would be in if it had been left to endure the weathering of a beach environment for an entire year. Which it was. And it had. 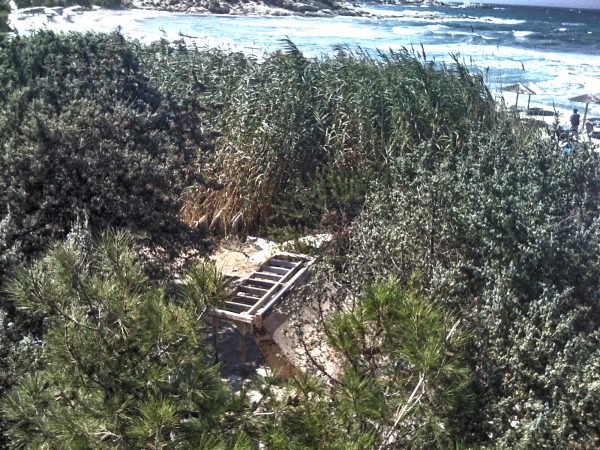 Some inquiries led us to propose a reparation plan and we were generously provided with a claw hammer and a hand saw. Clearly this was going to be a labor intensive low budget affair, but undeterred we got to work.

The frame was weak and wobbly and the surface plywood had rotted. We decided to take everything apart and re-enforce the existing frame with whatever surplus material we could salvage. Our efforts soon impressed the natives and our tool set was upgraded to a jig saw and power drill. We adapted our design on the fly with whatever we had to work with in terms of tools and materials and some plywood sheets were purchased with a mini ramp charity fund for the top layer.

Although we didn’t drift too far from a Greek summer work ethic and we were willingly distracted by the pagan seductions of the festivals,  two weeks after our arrival, a flimsy looking but much sturdier piece of transition architecture was ready to test the bone strength of the beach patrons. – Zachos Varfis 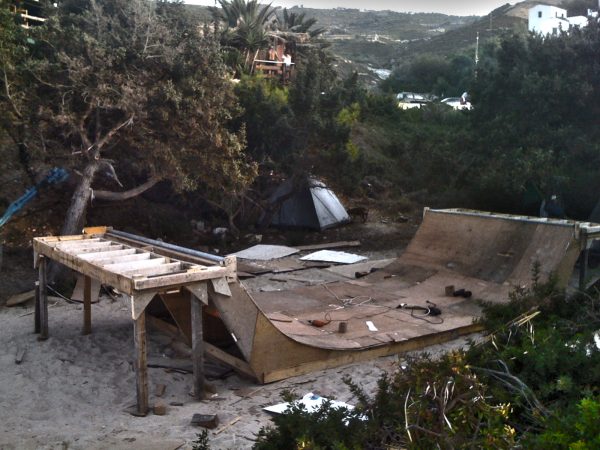