The Shark Fin
By Fred Keeler

At first glance, the Shark Fin left one with the crazy idea that a concrete Jaws lurked just below the surface of your typical, urban wasteland San Fernando Valley parking lot. Which is to say, the sight of the thing made the ordinary look extraordinary.

The dorsal-fin-shaped spine jutted out of the blacktop up to about 3 feet and declined into a series of unified parking blocks. It was a weird thing to see, but any skater would immediately recognize the possibilities. Pop over, slap on, grind up, slide up, slide down … whatever. The session could be as mellow or as heavy as you wanted it to be. The Shark Fin was a unique structure that creative rippers would have reinvented with every session, had it remained intact.

The construction and design was led by my buddy Clayton Graul, who has been masterminding DIY builds in Los Angeles from Culver City to El Sereno to Downtown for some years now. In a way, he’s kind of a shark himself– cruising the streets, scanning everywhere for the next underutilized, crusty, forgotten piece of urban blight to sink his teeth into. Once he gets an idea (smells blood), there isn’t much getting in his way.

This particular build was located within a little-used parking lot in North Hollywood. The parking lot is situated beneath behemoth power line towers and sandwiched between low-rent apartments on one side and a DWP power station on the other. Not exactly a postcard, but with the additions Clay and his team put in there, skaters would be on alert passing by.

When I first saw the Shark Fin and the other installations (transitions built at the base of the surrounding jersey barriers and parking blocks mortared together to form ledges), my first thought was that this project would be a dream come true for some of the poor kids living in the shitholes across the street. I could imagine some young kid growing up in one of those apartments learning to rip right there in that parking lot under the blistering sun. That imagined kid sure as hell wasn’t as likely to learn to skate at the skatepark down the street where pads (money), helmet (money), and ridiculous fee (more money) are required to get through the gated entrance. Here was a spot that would be a gift to a kid without the means to learn at the sanctioned park. Save the municipal spot for the kids aiming for the 2024 Olympics.

Of course, that vision of the stoked-out grom was fleeting. The Shark Fin was torn out the day after I got the chance to skate it with Clay and some other lucky peeps. And, damn– it was a fun piece of work to mess with. I popped over the spine a few times and later daydreamed about some next session that I’d push as hard as I could, grind onto the parking block backbone, and then up and off the Shark Fin. I didn’t happen that way, but everyone I saw taking a crack at it was likely imagining their own potential shred plans. Maybe some of the kids across the street saw us skating it and were coming up with their own visions. Who knows?

What is certain is that when you’re lucky enough to skate a great DIY piece, you might as well assume it’s going to be the last chance you’re going to get. Give whatever trick you’re thinking of trying in the future a go because the spot is gone the second you leave. To his credit, Clay gets that. He takes every demolition in stride. Cheers to him and to the next spot coming to a busted-up piece of land near you thanks to that lurking shark eye. 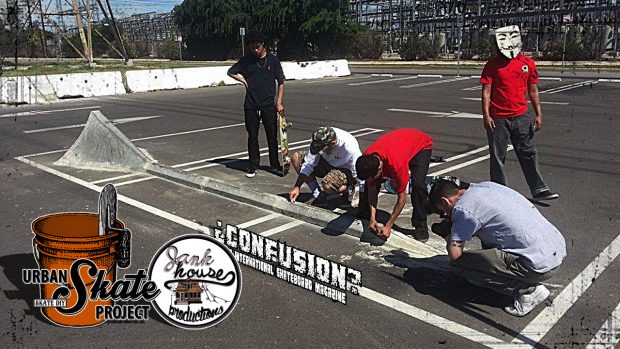