Near the end of the summer, there was a 40th birthday skate bbq session at the Siegburg bowl, about 20 minutes south of Köln, Germany. The birthday was for Ingo Fröbrich, an ex German vert pro. I was looking on the interweb for more info about him and found he came in 3rd place in 1999 on the Halfpipe contest in Zürich to none other than Tony Hawk (1st) and Renton Millar (2nd). That’s big time in my book. Anyway, there was a mellow skate session to take place with a BBQ but some park authority kook came and told us that BBQing was not allowed. In Germany, only certain parks allow BBQing, which explains why at the park across the street from my house in the summer, there’s about 50 BBQ’s going off, like some kind of Master BBQ championship in Lynchburg, Tennessee. Since we didn’t want to risk the rent-a-pig coming back and ruining the session, we moved the BBQ to the legendary Hof, in the countryside in nearby Bonn, which has a small mini-ramp inside an old farm house barn. Within 30 minutes, the BBQ session was relocated from the concrete bowl to the Hof halfpipe and good times went on well into the night. As of a couple months ago, the Hof is no more. They had their last blowout party in August, which I didn’t attend since I was in Malmö, Sweden for the Ultrabowl, which is coming up next here on Confusion…. 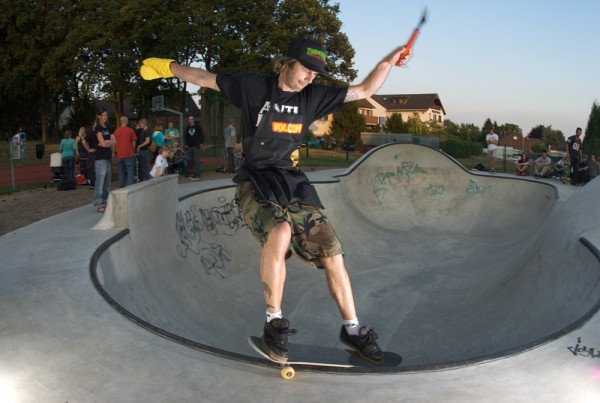 The Hof, in the countryside of Bonn, Germany.

Aries, Matteo and Alf avoiding skating through cow shit on the road to the Hof.

The set-up. Outside communal area for drinking, eating and merriment. Inside barn house for skateboarding.

André Langhein is a mini ramp champ. This tailslide does not do his skating justice, but check the video clip in this article, and you will see...

Aries Lurk-a-Holic with a slow-mo-5-0

From the farmhouse, back to the city... and the Hof was never to be seen again.