Mechelen is located in the Flemish Region/Flanders in the northern part of Belgium, about 30 minutes south of Antwerp. I hadn’t visited Mechelen since  last May and in this time, Bruno and his Concrete Dreams crew have been using Mechelen as a testing ground for new techniques, obstacles and features that they can then implement in a variety of skateparks they’re building around Belgium. Therefore, Mechelen has a little bit of everything: a bowl, a concrete miniramp, ledges, pyramids, speed bumps, tables, corners, a loveseat, a tombstone door for the daredevils to attempt, and a skateable perimeter speed line that goes around the outside of about half the park.

CLICK to ENLARGE Panorama of the recent additions to Mechelen

I definitely would not say Mechelen is the easiest park to skate, as it is a mix of street and transition skating – not just a bowl you can drop into and figure out your line in ten minutes. Mechelen is a skatepark not just for transition dudes, but also for street skaters, but best suited for those skilled in both ‘disciplines’. Take for example the video below of Hans Claessens made by Mechelen local Ralf Goossens. Hans uses every inch of the skatepark and mixes his street and transition skills at a spot that is not only built to grind but also built for pumping around at high speeds, wallriding, transferring and blasting off every bump and obstacle in your path.

Holferius McGee. Backside disaster, as seen from the other side of the coffin door. Photo: Steven De Wachter

Another new section at Mechelen. A wide wall about 2.5 meters high with a perfect whippy corner with pool coping.

Jarne Verbruggen. 5-0 over one of the latest installments at Mechelen - love seat! Photo: Steven De Wachter

DIY BBQ soon to be skateable, but currently grillable. 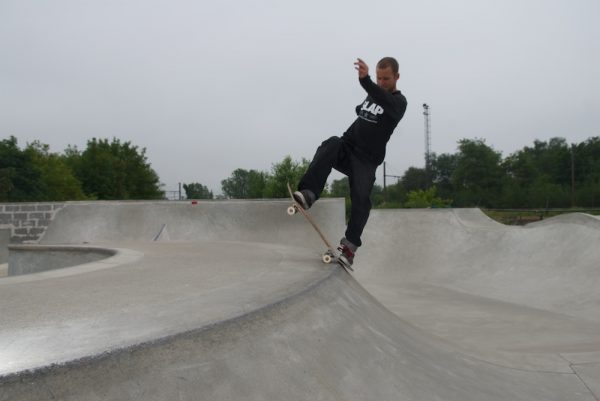 Zarosh. Frontside grinding from the 'street course' to the deck of the bowl as the train leaves the station. Photo: J. Hay

Ralf Goossens. Filmer and Editor of the video below, getting a little bit of his own shred time. Lien to tail. Photo: Steven De Wachter

Ralf Goossens. Out of the bowl to the quarter. Backside disaster.

Get off at this stop, go downtown and kiss the cross, walk five minutes and you're at the skatepark if you don't get lost. Photos: J. Hay

For 2010 tour of Belgium with Impakt Skateboards check out:
http://www.confuzine.com/2010/07/06/impakt-skateboards-belgium-tour/