Never ending beer discussions had to stop. Every one of us wanted to build something and it was time to get radical. One day around 2 o´clock in the morning we were enlightened! We found the message carved in our table at the bar. We finished a few more beers (and a few shots), got the whole crew together and started to search for the spot.

The winter was coming, it was getting colder and colder. We didn’t have much time left. There is 30 kilometers from the Czech capital of Prague to an unfinished prison and not far from that stands an abandoned building, all covered up with filth and dirt which was left there by old residents. We couldn’t really be sure about the quality of the surface, but after three beers it seemed to be perfect. Then we found a stream nearby so we could have the water, and a sandpit stood five minutes from there. Filling material was also no problem. Okay, let´s do this. As a consequence of the lack of workers and time pressure it happened that construction didn’t go by the technical code of the building office. But we got the shit finished. We called it Garage.

There’s nothing easier than building something on your own with a group of your best friends. There’s no use to cry that the authorities don´t want to do something for you.
Fuck that. DIY or CRY!

Thanks for support to Darkslide.cz, Polar Skate Co. and Vans

Daniel Vojtas. Blindside kickflip to fakie over the death box. 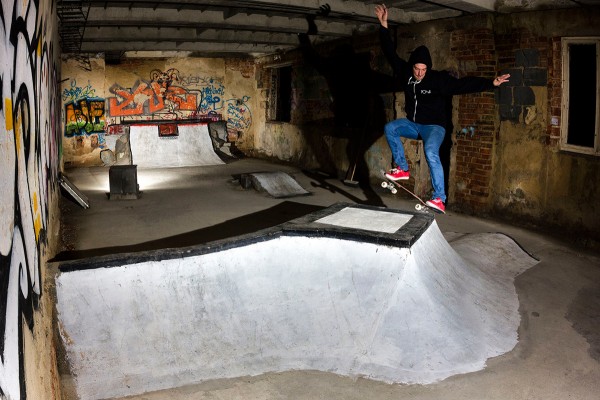 Roman Spacek. Crazy primo wallride. After a few tries the wall was so wrecked that Roman landed it suddenly like this.

Matyas Volek. Backside feeble in the window frame. Matyas also handled a blunt there too.

DIY or CRY Garage is the new DIY spot near Prague, Czech Republic

Project was supported by Darkslide.cz, Polar Skate Co. and Vans