“A lot of late night skip hunting missions helped start the creation of a sketchy mass of scrap wood, road signs, gaffer tape and bricks in the form of a bowl. With old doors holding it up, the thing was four feet high, had fast corners and a seven foot over-vert pocket. Very few people got to skate this mess and by the time people heard about it, the British weather reduced the ramp to a pile of rotten wood.

Trading splinters for concrete dust the construction of a bowl started on my dad’s vegetable patch in early 2007. With a vague idea, a hole was dug, chicken wire was put down and a raw portland mix was laid. After a sketchy start, shit weather and a lot of late night winter pours I spent hours alone mixing, pouring and trying to smooth out this mess. After half of the bowl was complete I needed some more money for materials, so F.P.S.B. (Face Plant Skateboards) began. I got some blank boards from a third foot through Jim at Ride Skate shop and printed them up, along with t-shirts and hoodies. Shortly after, the build was back on.

After a good year of sessions, the bowl had to go bigger. Half of the bowl was smashed out with help of my friend Tom. It was at this point more people wanted to help out, but after putting in a few hours, they’d give up and wait for it to be finished so they could skate. A deep end was formed with the help of Tom and Nick – a true Swompton local. After the weather cleared (that October was shit) the pours began, a waterfall was shaped and the bowl really began to come together. Out of date concrete made this build go quick, getting twenty bags for around a tenner. Some mixes went wrong, pours collapsed, so it had to be ripped out and done again, but after a few months, it was done.

The better weather came and the sessions went off. More visitors from over the UK heard about the bowl and came to check it out. In early 2010, I moved down south and the bowl lay unskated for six months. Cracks had formed, the plants had taken over and it was time to make it bigger one last time. Rubble was sourced and piled up on the existing decks and concrete was slapped on top. This last build took just under a month and the bowl is now, as is.

Vert, over-vert, wallrides, loveseat, rough patches, smooth patches, cracks, whippy transitions, broken coping, pure crust. Over the past seven years random footage has appeared in a few Coventry scene videos made by Terribleco. The official F.P.S.B. video 666, which came out in 2009, had a section on the bowl and the new Baghead video “Baghead Kills” in the works will have a good amount of the bowl, in all its crusty glory. But when you’re just skating, there’s no time for filming, so there isn’t a lot of footage of it out there.

The crustier the better! A selection of the types of coping Swompton has to offer.

A lot of people have been down here. Some come and don’t want to skate. Some are scared to drop in. Most struggle to find speed, and all will eat shit at some point. I’ve seen a lot of heads bounce off the concrete, mine included. Some days I’ll have a skate and the bowl will kick my arse. People will come with their boards, but will leave with hippers, swellbows, bruises, cuts and of course covered in dust.

My bowl was a case of I wanted something to skate. I built it, I skate it.” – Henry “Swampy” Moore. 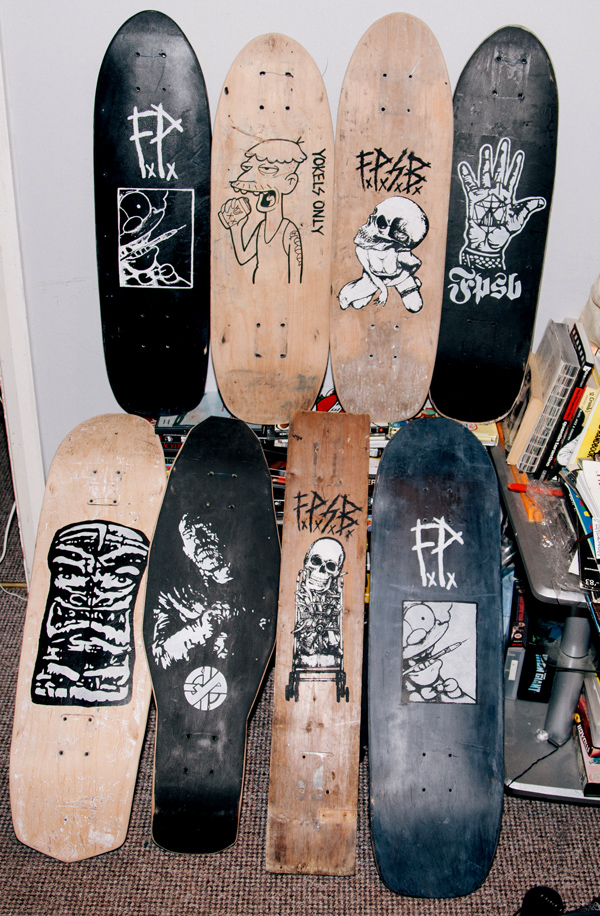 Swampy slashing about in his own bowl