The Booze & Cruise weekend started off on Friday night at the Ladybird Skatepark in Tilburg skatepark as a kind of warm up to the following evening. Without mentioning the details of a night of debauchery, such as visiting a coffee shop on the way to the skatepark and indulging in the local smoke and drink all night long and bombing a parking garage (on a skateboard) down a steep hair pin turn directly into a fence resulting in a heel bruise that still hasn’t heeled and then going downtown with the Austrian dudes, there wasn’t really too much to tell from the first evening – except seeing the premier of the new Creature video with Stu Graham in attendance, still wearing his work boots from building a park in England earlier in the day.

The next day we headed foggy brained over to the Area 51 Skatepark in Eindhoven, around 3pm with skate photographer Nicola Debernardi who was our gracious host for the weekend and also the organizer of the Booze & Cruise. He had to continue to organize and my plan was to skate until the event began, but aforementioned heel bruise had me lurking hard, spectating from the side lines and avoiding the beers for as long as possible… until the session finally began. The skatepark was cold as a witches tit in a brass bra, and after twelve hours of filming, photographing, talking shit, drinking and smoking, it was time to walk an hour back to Nicola’s in the cold dark wind of the late Dutch winter night and rest our weary and bleary heads.

The first of many foreseeable Booze & Cruises to take place at Area 51 Skatepark was a success. The level of skateboarding for a mostly amateur contest was incredible. Standouts were the locals, Nick Bax and Jeroen Sars (Team 100%), Job and Daan van der Linden (whom I named the mini Cardiel of Holland) who were claiming Team Andy Roy, and the Belgian duo, Szymon Stachon and Maarten van den Bossche. Two other teams that were killing it were Team Eazy Riders with another dutch man, Tim Bijsterveld, who was joined by vert and concrete transition killer Bjørn Lillesøe from Copenhagen, Denmark who lost his luggage on his flight and had to share Tim’s board. The other team were Team Dirtbag with Kevin Wenzke flowing through the bowl with stylish airs and team mate young gun Eric Springborn (the son of German legend Tobias Springborn) who was also skating alongside Bjorn Borg, I mean, Björn Klotz. Yeah, too many skaters to mention, but the show did go on and check the photos, but especially the video, to get an idea about the mayhem that went down on that long, cold, dark and stoney Saturday in Eindhoven at Area 51 skatepark. Keep your droopy eyes open for the next Booze and Cruise, for it certainly will be another big hit!   – J. Hay

Syzmon Stachon with an over head alley oop transfer.

Nick Bax rips this bowl harder than almost anyone. Transfering over the hip.

Bjørn Lillesøe. Sailing through the corner to the extension. 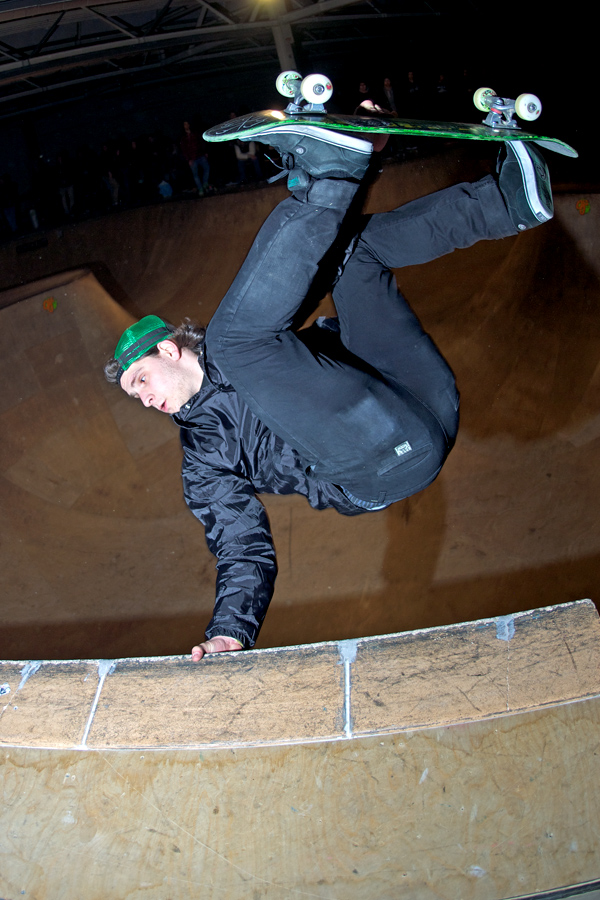 Tim Bijsterveld, another local to the Area 51 park. Frontside invert on the extension.

Kevin Wenzke blasts off the extension into the corner.