Regensburg is a city located in southern Germany known more for its medieval city center and less for its relatively small but close knit skate scene. Winter can be long and ugly around here and until 2012, the usual place for some of the best winter sessions was Markus’ flat, which he turned into every skater’s dream.

Jonas and Basti shredding the miniramp and wallride.

It could get pretty crowded, especially if the neighbours came over with their BMXs. Kons, Blunt to fakie.

Kriby having a pizza in the living room

When he moved out and there still was no other opportunity for indoor skating in sight in winter 2012/13, he teamed up with local artist Jakob and managed to organize an abandoned store in a suburb, just above Jakob’s gallery Art.BuZZ’l. There he could place some obstacles from his flat (at least until a new tenant appears). Some plywood plates were laid and the obstacles rebuilt, Jakob installed a giant model-railway-landscape made of garbage and we had a new makeshift indoor skatepark. So over the last few months some good sessions, an ongoing battles of S.K.A.T.E (youtube.com/user/tintrashers) and a couple of funny events at the Art.BuZZ’l took place there…

Photos and words by Andreas Satzinger

Basti came over with a brace on his back but still stuck this Nollie Bigspin Nosepick (No sequence. You have to trust me on this one, i guess). 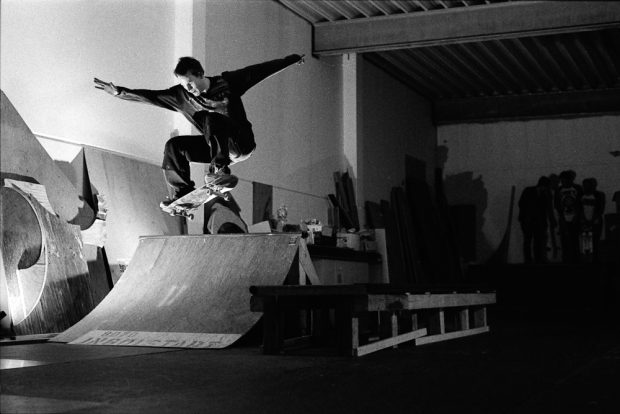 Markus, FS Nollie over the spine

The model-railway-landscape covers almost a third of the area.