Officially called ‘Pedrinhas Beach Ecological Park’, the “Piscinão de São Gonçalo” was inaugurated in 2004, closed in 2008, reopened in 2010, definitively ending its activities in 2014. It was a park with different cultural and sports facilities, built to from a mangrove swamp in the municipality of São Gonçalo, on the outskirts of the Metropolitan Region of Rio de Janeiro. It’s main attraction used to be an artificial lagoon, with sandy shores, simulating a beach. It’s water was pumped from the Guanabara Bay, icon of the natural landscape of Rio de Janeiro, despite being polluted. Then, that same water went through a treatment process in a station also installed in the park. And this was, over the years, the scenario that transformed the Piscinão de São Gonçalo into an area suitable for the practice of various artistic, cultural and sports activities. Unfortunately, after its deactivation, it became the object of garbage disposal, theft, vandalism and various types of under utilization.

Among the buildings of the old park, a 3×3 basketball court was abandoned. With smooth flatground and little dispute over the use of space, it started to be frequented, occasionally, by local skaters, prevailing the practice of flatground tricks. For two years, this was the pattern of the skaters’ relationship with the court, with no appropriation in the strict sense, in the form, for example, of the constant presence and the construction of obstacles. In any case, as the abandonment was consolidated, other activities took place in the Piscinão, with emphasis on the theft of metals from its facilities. With that, the bars and the basketball backboard were removed from the court. In addition to these uses, it is worth mentioning that, since the deactivation, the only intervention of public managers in the space of the Piscinão was the demolition of the kiosks and the removal of the rubble to a more remote area, already inside the mangrove. It is possible that these actions were carried out in order to ward off the homeless.

In 2019, there was a rehearsal of change in the pattern of skaters’ relationship with the court of the old Piscinão. So began the attempt to build a quarter pipe. The rubble was piled up and the transition radius defined, but didn’t pour concrete. The material remained in place and was soon scattered. It was only during the first phase of the Covid-19 pandemic that skaters decided to actually build an obstacle on the court. Despite the availability of waste from the demolition of the walls of the kiosks, they bought concrete blocks and started effective manifestations of the DIY culture of skateboarding. The construction of a concrete curb with a metal edge and the installation of a pipe, also made of metal, cemented on the floor of the court were the skaters’ first interventions at Piscinão. Thus, they advanced from circumstantial use to self-construction, even though their presence in the place remained irregular. In any case, there was no repression. This is explained because the court, as well as all the surroundings, can be considered an undesired space by urban managers. With the exception of occasional football matches, including on the court, and the practice of walking around the deactivated artificial lagoon, none of the originally planned uses of the old park can be observed today. The public area of an amphitheater, for example, became a circuit for motorcycle driving lessons. Anyway, despite the change of relationship with space, the frequency of skaters remained, as said, inconstant. Undoubtedly, this created the conditions for the metal curb’s edge to have been stolen. Likewise, the metal pipe was ripped out of the middle of the court, freeing up space for football matches on site. Months later, it was found, in an oxidation stage, on the banks of the mangrove. 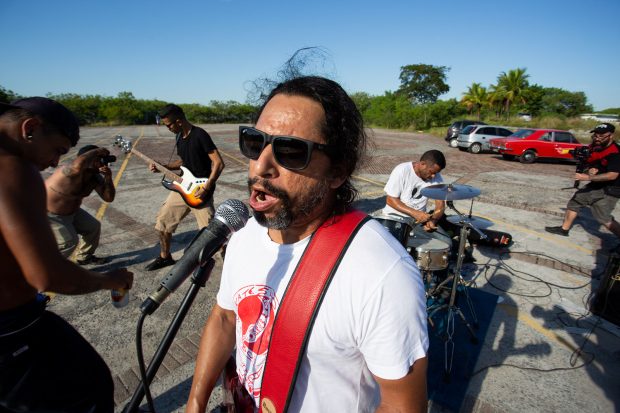 The second phase of the occupation of the Piscinão by skaters began at the end of April 2021. Some pre-cast concrete obstacles were donated and installed on the court. On the day of the installation, a video of a boa constrictor (jiboia, in Portugese), caught in the surroundings of the site, circulated in message groups in the neighborhood where the old park is located. Coincidentally, one of the pre-molded ramps had the design of a snake. There was no doubt, it was positioned where, supposedly, the boa constrictor had been filmed. Due to this “mystique”, the spot was named “Jiboia DIY”. This is, so to spot, the “founding myth” that circulates among skaters, which reveals a strong pattern of symbolic identification with space. In any case, on the following weekend, the dynamics of appropriation of the court resumed, in the form of what can be called DIY culture itself. Three obstacles were built at once: a 1 m high quarter pipe and two smaller ramps, approximately 40 cm high. Jiboia DIY already had a profile on a social network and quickly gained visibility in the skate scene in Rio de Janeiro.

Gourmet for the concrete artists

In the course of 2021, numerous task forces, accompanied by skateboarding sessions, barbecues (the two barbecue grills built, so far, are among the most valued
objects) and spontaneous get-togethers, ensured the construction of obstacles inside and around the court. To this end, the skaters-builders committed their own resources, relied on donations and carried out fundraising campaigns, organizing, for example, raffles and shirt sales. Even so, much of the material used is reused. As a result, today, on the ruins of part of what used to be the São Gonçalo Pool, quarters, jump ramps, spine, wallride, curb, corner and 45’s can be observed. All this built by the skaters themselves, some of whom, by occupation, gather skills and knowledge in construction. Skaters who became regulars at Jiboia DIY, establishing a strong sense of belonging to this place. There is already, among them, as an expression of this feeling, the use of their own decks, commissioned with silks and logos that refer to the spatial and cultural landmarks of the spot. 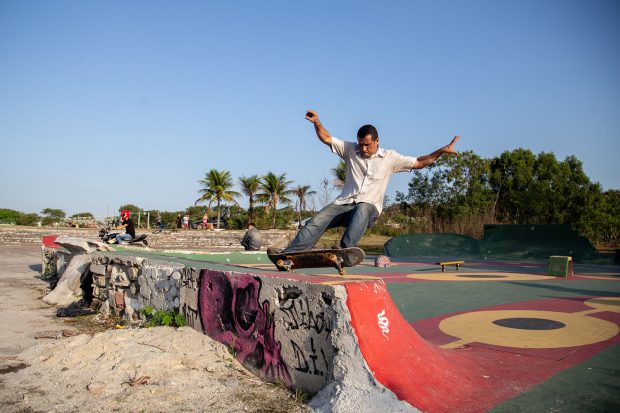 Although clandestine (and maybe because of that), Jiboia DIY had some of its dynamics registered in the recording of a TV show. This fact accompanied its increasing visibility, as it is sought after and eventually frequented by skaters from Rio de Janeiro and even from other cities and states in the country, as well as foreign skaters. It is an audiovisual production that brings together a sequence of episodes with the theme of the construction and maintenance of spaces by the skaters themselves. In other words, a production that portrays the DIY culture. As a result of this TV production, new obstacles were built and an artistic painting was performed throughout the spot. Undoubtedly, this record expresses the proportions assumed by this initiative by local skaters and can be used as an asset in an eventual negotiation with the public power, when the space is possible for other purposes. Currently, it is known, for example, that authorities in the municipality of São Gonçalo and the state of Rio de Janeiro are planning to launch an Urban Park in the area of the former Piscinão. That is, they are committed to the elaboration and future implementation of a project that coincides, in part, with the Jiboia DIY area. Be that as it may, the skaters are already organizing themselves to find a proposal that contemplates the permanence of the self-built spot, without necessarily contradicting the aforementioned project, which is already in the public hearing convening phase.

Finally, it is worth mentioning that the expansion and permanence of Jiboia DIY is often celebrated in events that are slightly more organized than the pontaneous
meetings/fraternization that, in general, follow every skate session. So far, a year-end party, a birthday party and a Halloween party have already been held. Using generators, since there is no electricity on site, in all of them the skaters mobilized bands from the underground scene of São Gonçalo and Rio de Janeiro, some of which involved skaters, who performed live. The last mentioned celebration inaugurated, by the way, the newest area of Jiboia DIY, which extrapolated its initial landmark, the old 3×3 basketball court, occupying and annexing what was, in the original Piscinão project, the stage of the amphitheater. With this, it is noted that the dynamics of DIY construction is evolving towards the restoration, equally clandestine, of the cultural and leisure functions of this public space that was completely abandoned. All of this increasingly solidifies the skaters’ ties to this space, which reinforces the feeling of belonging derived from its material and symbolic appropriation. 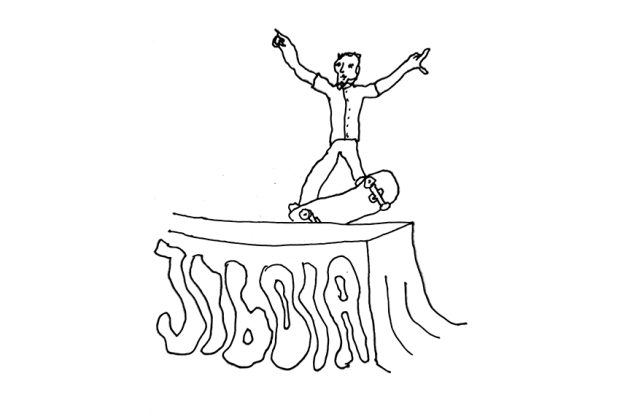