Although not all these guys are officially part of the OMSA crew, skaters from Germany, Basque country and England got together for a proper shred in the newly rebuilt NorthBrigade skatepark in Cologne, Germany. Somehow most of the session ended up down in the older Owl Bowl built by some locals three years before, although half the session went down, before the cameras came, out at the newer, bigger bowl built by Anker Ramps as part of the new rebuild of the NorthBrigade. Only the Owl Bowl and the old wooden miniramp are left in place, as well as the old banked wall of the 1980s surrounding the new bowl. Although these tricks aren’t the gnarliest you’ve seen, keep in mind most of these guys are over 45 and a couple of them over 50. Let’s see you do a double truck 50-50 grind in a tight pocket when you’re 50!

Wolfgang Toth aka Wolfgangster with the Endless grind. 50-50 around the corner of the deep end. Photo: Dietsches

Anders Tellen. Sweeping the myth that you’re old at 46 under the rug in the deepend of the new bowl. Photo: Dietsches

Dietsches. Backside 50-50 in the pocket in the Owl Bowl. Photo: J. Hay 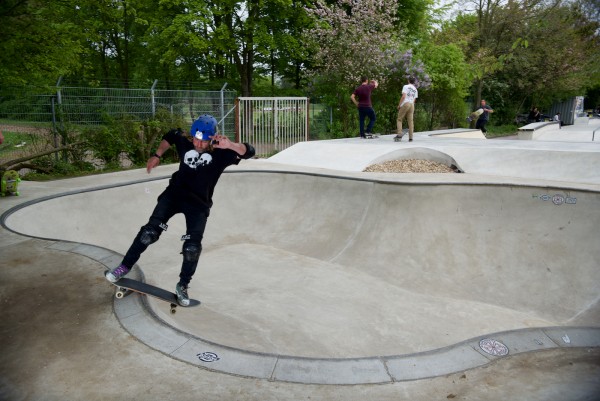