Koekie and the Knock Out Blocks crew put on their annual RAMP JAM in the countryside about 30 minutes from Antwerp, Beligum. The recipe each year is always the same: punk and hardcore bands, a sketchy ramp with as many gnarly features as possible, cheap beers, mayhem and destruction. Each year the Ramp Jam gets bigger and bigger and more chaotic. There were so many bands that wanted to play this time they started on Friday night, so already on Saturday people were thrashed from skating and partying and punking out the all night. Skaters from England, Germany, Denmark and of course both the flemish and french speaking parts of Belgium made it out to the 5th installment of the Ramp Jam, but only the strongest of the strange had enough energy to skate again on Saturday with some much needed fresh blood added to the mix of sweat, dirt, wood, concrete, beer, skin, and bones. The sun set, the fire blazed, and the skating mostly stopped as the bands continued to play, and the fans began to slay in the pit of mud and broken glass until the morning dew covered the ramp so that trying to run up it to sit on the deck would end you flat smack on your ass. I woke up mid-morning with the sun baking me laying on top of my sleeping bag between two cars, glad I hadn’t been unnoticed and ran over in someone’s hasty departure. Looking across yesterday evenings field of battle and beyond, most of the grassy parking lot had already vacated – an armageddon of burnt wood and metal and empty beer cans were all that remained, along with a few immortal lingering souls, who still had not had enough. Until next year amigos…. 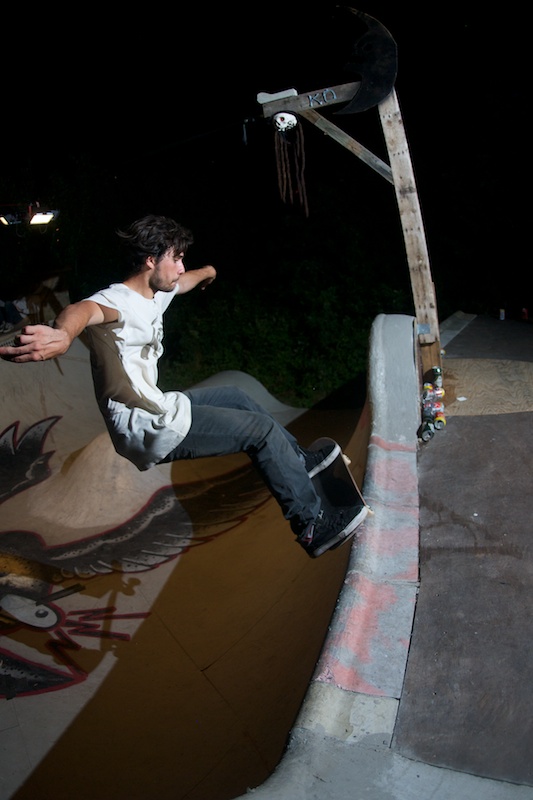