“Last year the new polish skateboard movie Grey Area. Everybody was super hyped. Dirty spots, DIY concrete and creativity on board. We interviewed Kuba Kaczmarczyk, the guy behind the whole thing, to ask some haunting questions.”

What is the concept of Grey Area?

The main idea was to make a proper skate video. As we all know in the era of internet clips the full  length movies are dying. It’s very important for me to keep it alive in order to keep the cultural aspect of skateboarding alive.

Grey area is a term related with communist era, right? At least in the case of Czechoslovakia. What is the supposed statement in regards to skateboarding or… how does it relate to it in the context of Grey Area skateboard video?

Yes and no. Of course I was born during communism  and it had a big impact on my life and skateboarding in general. Warsaw, the city where I live was demolished during the second world war and then rebuilt in the early communism days. Therefore, the architecture is very simple and everything looks “grey”. When the comumism system fell apart the whole country was grey – now it’s a bit different. New colorful and modern buildings are poping up on every corner, but still, there is this grey color inside the people who remember the time of comunism.

When I was filming for Grey Area, I focused on local spots instead of going to famous skate meccas. I also didn’t want to “colorize” our spot and make it more “attractive” – it is how it is… Whatever I did, it wouldn´t look like Barcelona or Paris right? I wanted to make an advantage of of our “weakness” which for some people are the rugged polish spots. Of course we have a few marble plazas, but they aren´t that interesting to film at… rougher is better! 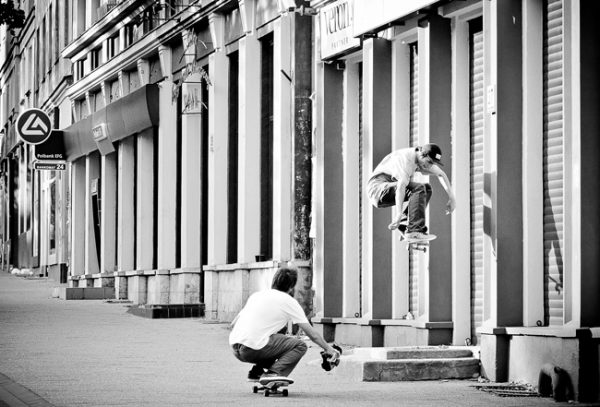 How long did you guys work on the film?

It took a while. Since I´m not that young anymore and have other duties other than skateboarding, I can’t do it every day. The filming took around four to five years but in the meantime I gave tons of my footage to other projects… The editing was done together with filming, then we had a few months for the final touches – final edit and postproduction.

When the Capitol spot was found? How long did the era of this spot last? And your personal memories?

The Capitol was our main spot in Warsaw during the nineties. It was like Stalin Plaza in Prague but in Warsaw. It’s a part of the russian/communism heritage as well. Capitol formely known as Kino Oka was an old cinema playing the oldschool 3d movies made in the Soviet Union. It’s funny – they played the same two movies for several years. I still remember their titles. There was the perfect marble skate spot around the building – we had everything there – ledges, manny pads, gaps, loads of flat. Unfortunatelly, it’s gone – the city decided to skate-stop it. They changed almost everything over there. My memories… man, we lived there. Our life basically went on at this place. We had a crazy fight with hoolligans trying to steal our boards, crazy parties at night and last but not least mad skate sessions.

After that the DIY spot was built. Was that your new home?

Korty was born several years ago. The place is an old tennis court located in Warsaw. If you wanna have more details hit me up! In the beginning, a few guys built those marble ledges, then we took it over and started adding more tranny stuff. There is definitely more to come over there.

How big is the DIY scene in Poland, if we have to put that label DIY on it. But you know what I mean, building your own spots from concrete…

It´s not super huge. Skaters are mostly lazy and they play games of skate at the parks. The situation in the early nineties was so different. Every neighborhood had its own self made wooden launch ramp and other crazy obstacles. Building stuff and skating it afterwards was the thing that unified us back then. Now, when everything is served on a platter, it makes young guys lazy. There are few good exceptions to this rule though – First Floor, Lenin (Rip), Rodzina(Rip).

We can see some of Czech spots there. Stalin or the bowl in Valasske Mezirici, how did you guys manage to find it? (I mean that bowl, what’s the story)?

This part was mostly filmed by my friend Aram. Piotrek, the bowlrider from this part surfs the net and looks for some bowls all the time. I don’t know exactly how it was found, but my assumption is that he found it like this…

Regarding Stalin Plaza – I love this place and the whole city of Prague. On the other hand I hate filming over there – it is so “overfilmed” now. In the nineties my old crew and I were traveling a few times every year to Prague. I used to know your scene quite well. I even had the privilage to film  with a few Czech riders including the guy with the best style in the Czech game – Pavel Beran.

We spent every vacation in Prague skating, drinking and partying all day long – such good memories. My first visit in Prague was in ’92 I guess, still remember David Horvath killing the Lenin spot and the crazy downhill from Strahov. It was a long time since I have been there but definitely I’ll come back one day. 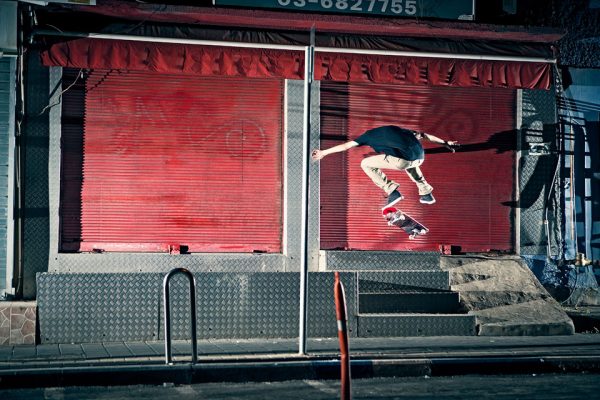 What was your inspiration for Grey Area?

My inspiration were the videos from nineties. I wanted to bring back the feeling when you have a new skate movie and sit down on the couch and watch it together with the mates before the session.  I really like the New Deal video “Whatever” and their idea having the skits made from old movies. Of course instead of Blaxploitation we used old, for us, funny polish movies. Always the biggest inspiration for me is “Eastern Exposure 3 Underachievers“.

It seems you and Pontus are friends… He also has some footage in Grey Area.

As he mentioned in one of the Kingpin articles we have typical love/hate relationship. He’s my younger friend who always tries to teach me – haha. No he’s cool, I love what he does with Polar and I back it 100%.

With Pontus, he is related to Michal Juras, I mean in the Polar family. And Michal also has the sickest part in Grey Area. The archetype of all-terrain skater! How would you describe his skateboarding?

You’ve already answered your question – He’s super sick, all terrain rider. Michal´s story with Polar started when Pontus came over to me to film for “In search…” I showed him Michal´s footage that I filmed, Alvdolf was super hyped on it and you probably know the rest. I gave all my footage of Juras to Pontus and he used it in the movie. Then it was a natural thing that Michal was on the wishlist when Pontus started Polar. Michal is a true warrior on and off the skateboard. Now he’s recovering after his knee operation. Last Fall he had a really nasty ligament injury. Get well soon Juras!