The Fiesta Des Urulines is a crazy day of eccentricity that takes place in the heart of Brussels in Belgium once a year. Organized by the Brusk (is dead) collective, this skate-music party is a full day fiesta combining concrete bowl skating with music ranging from punk to rock n roll to jazz and electro along with pop up skateshops, organic food, specialty belgium beers, a grafitti session, and another skate session on the D.I.Y street course which was built the day before along with a full wooden shack sun shade 0 star sleeping accommodation. I arrived the day before the event via train and headed to Ian Dykmans Brusk commune and dropped off my sleeping bag I never used and then headed into the city, stopping by the crazy flea market which runs virtually everyday and witnessing two grown men fight over a pink barbie backpack before grabbing some soup (meal of the day) and then heading to the Square des Ursulines where the Fiesta would take place the following day. A few hours later the R.O.W. and Boldriders crews from Slovenia showed up along with Sergej Vutuc aka Helmut Lampshade and after we had a little skate session in the blazing May sun, the dudes got underway on constructing the hut which is where we ended up sleeping the next two nights…

This guy shredded the Punisher bowl. Super smooth and fast lines with a variety of flowing grinds and airs. Damien Delsaux getting in a few lines before the mayhem began. Photo: J. Hay

The Boldriders and R.O.W crew along with Sergej Vutuc and Kai Epli built an impromptu wooden hut which served as a sun shade, the back wall of a street skate course and our 0 star sleeping accommodation at the Square Des Ursulines!

Rock to fakie. Didn’t catch this dudes name either, but he was skating the whole day and throwing down miller flips. Photo: J. Hay 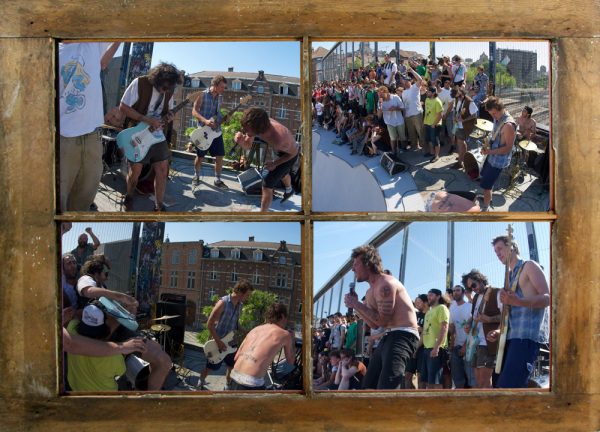 There was a good show playing that night, The Spits, so me and gypsy Miriam headed off to secure some concert tickets for the crew. A few hours later and a few too many beers later, everyone somehow found themselves at the show. Danger Dave and his chica were there. My flemish skater buddies Yoeri, Koeki, Radman and Qwentin who never miss a good punk rock show were there and along with the Boldriders and a few hundred others. It was one of those shows where the band were good but the slam pit was even better. Last thing I remember is a failed flip off the stage, landing on my back…. The next day I awoke mid-day fairly haggard laying in the hut and the Fiesta was about to begin….

Julien Benoliel with the trick of the day. Backside blunt on the speaker extension. Photo: J. Hay

Highlights: R.O.W. band playing on the deck of the Punisher bowl, Julien Benoliel killing it with huge backside ollies, super stylish and effortless backside disasters and a blunt off the speaker extension, Jarne Verbruggen ripping shit up, hanging out with crazy Barna and Brusk Mike, meeting lots of lunatics, a 15 minute power nap in the upstairs of Radmans VW van sweating in the blazing heat, Belgium beers, Helmut Lampshade‘s experimental “skate/guitar” rock, skating the Punisher bowl for 15 minutes with the R.O.W dudes and Boldrider crew from Slovenia, Lele telling some bum to beat it when he woke up with a homeless dude’s hand on my wallet as I slept in the hut with no sleeping bag, the Spits show, more for the high energy and chaos than the music although the music was good too, walking around Bruxelles, eating feel awfuls, and the overall stoked vibe that was in the air the whole weekend. Thanks Ian Dykmans, and the entire crew. Belgium and the Belgians rule, their beer is good, the food is cheap, and they invented the “french fry”. – J. Hay

Julien Benoliel. Back smith with the Sons of Disaster for some inspirational rock n roll.

After the bowl sessions there was a 30 minutes graffiti tagging fest. 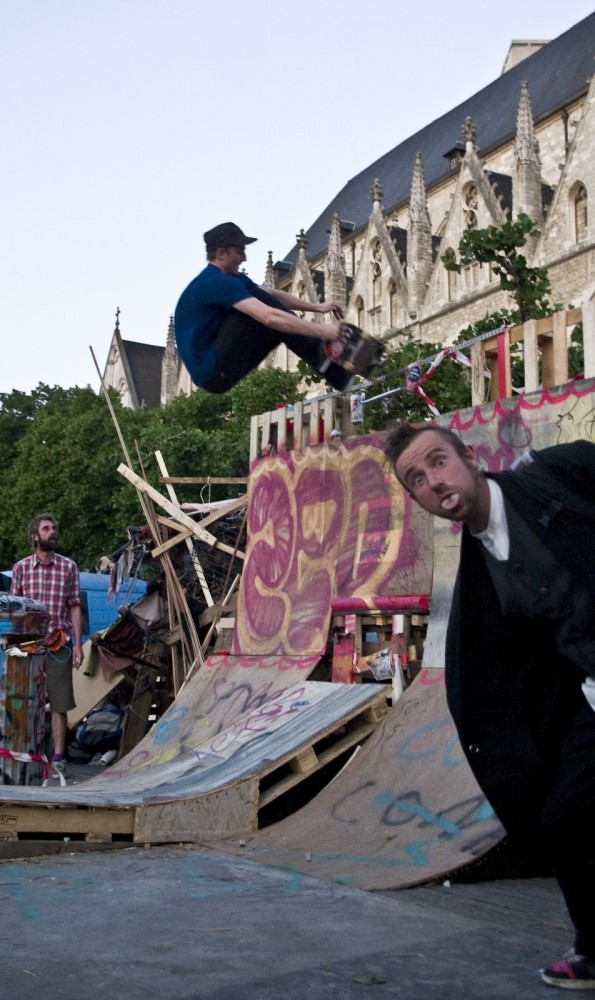