We headed out on the road Friday evening with a good part of the IMPAKT SKATEBOARDS team in Captain Road Hog‘s van, with only 2 hours to our destination of Brussels, where we would stay at the Brusk Collective‘s house in central Brussels. Beers were cracked and the dudes were freaking out with the excitement of our weekend trip to Belgium. With 7 dudes in the car and bags full of kölsch tall boys to be taken down, frequent piss and cigarette stops slowed our progress but we still managed to roll into Brussels around sunset. We dropped off the van and our bags at what we discovered was some kind of anarchistic-hippy-punk commune. The toilet is a dry toilet where you poo into a hole and scoop some saw dust and sprinkle it over your waste, which is later emptied out into the corner of the back yard. We ate from a super sized bar of chocolate (since we were in the land of good beer and good chocolate), claimed our spaces on the floor, a bed, or a couch and grabbed our skateboards and headed down hill down town with our host Ian Dykmans who had a plan for us to check out some street art in progress from Guerilla Grafitti artist Bonom. The night ended with 2 guys missing, 1 who had a brief stint in Brussel’s jail (but he didn’t do it, so he was released) and he couldn’t find his way back to the commune and had to shiver sleeplessly in the bowl at the skatepark surrounded by sketchy gypsy’s. Day 1 over. 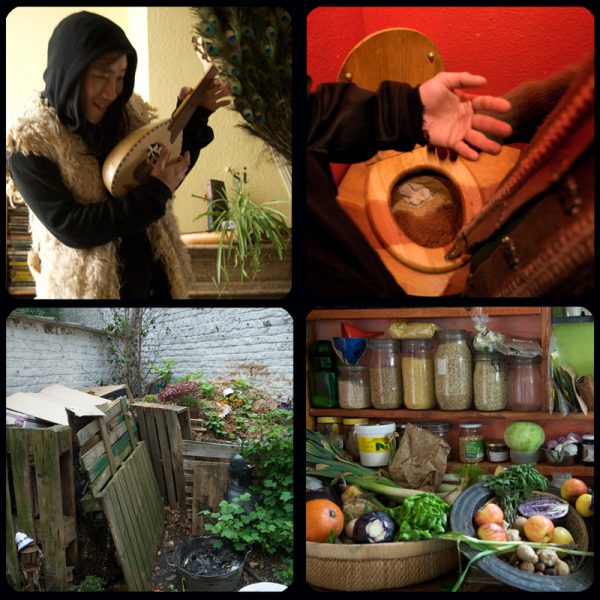 clockwise from upper left: Sung Woo, the Tibetan sheep herder, rocking the mandoline. How to take a shit in a waterless sawdust toilet. Every commune must have a full supply of vegetables and fruit from the farmer’s market and a collection of grains, seeds, and tinctures. After you shit, the poo sawdust blend is recycled in the backyard so flowers can grow and your poo returns to the earth from whence it came.

Day two started with us finding the missing dude through a chance run in with some of the other Brusk dudes, who pointed him in the right direction. By then we had already finished our impromptu jam of found instruments in Brusk Headquarters (a trumpet, bongo drums, wooden xylophone, rainstick, and some other instruments whose names I do not know). We grabbed some weird food for breakfast (I had anchovies wrapped around olives and some funky cheese) drank way too many coffees and headed down to the Fiesta Des Ursulines which you can read about here or watch the video here. As mentioned in the previous article, we avoided an all night party with Danger Dave so we could be fit (or semi-fit) to eat some more concrete the following day.

Jan Wermes jams a feeble during the chaotic punk session at the Fiesta Des Ursulines.

Day 3 came all too early and then I struggled to get myself off the floor with everything swollen and bruised from too many wipeout’s in the punisher the night before. Today I would not be skating but with a camera and video camera to man, it wasn’t as disappointing as it had been for the others that were too wrecked to skate. Still we had 3 1/2 people that were still willing and able to skate so we headed out to Mechelen which is directly on the way to Antwerp. I called Roberto [Alemañ] to try and get him and Danger and Sean [Gutierrez] to meet us on the way for a session, but Danger & Sean hadn’t slept, so we took Mechelen on our own.

[updated July 20th, 2010]
Mechelen is one of the newest parks in Belgium – built by  local skaters. Bruno (who has worked with both Brusk Collective and Minus Pools) organised the project but everybody who wanted to work as a volunteer could work there. This project was and still is supported by the city and they gave money for materials.The design was done more or less freestyle by everyone around at those moments. Specifically Mike from Brusk helped out a lot during phase one, which was the construction of the bowl. The other Brusk members also helped out a few days and MinusMatt shot the pool during one week. The construction crews of Belgium & Germany (Brusk, Minus Pools, and and now Bruno’s new Concrete Dreams) all seem to work as one big happy family, sharing projects, experience, knowledge and creativity to work together or alone, depending on the circumstances of the project, to build some of the best new concrete in Europe.

You see, Belgium (as well as Sweden) is following a similar boom as Oregon about 10 years ago. There are new parks popping up in small towns all over and they are built well and how we like them! Pool coping, oververt, challenging bowls and creative designs that you don’t get bored of  after a few weeks of skating. Mechelen isn’t that big (in height) of a park and about 2/3 of the park is more of a street area, but in street I don’t mean stairs and pyramids, rather tons of creative lines you can put together on your way to hit the vert quarter (with pool coping). Again, I was too hurt to skate, but it’s well worth it to hit up if you are making a tour of Belgium or if you live anywhere in western Europe. The park wasn’t 100% finished but pretty damn close. We were on a time constraint because our plan was to meet Consolidated in Antwerp before they headed up to Amsterdam, so back in the van and heading north….

Captain Roadie. Front Side grind on the vert wall.

After an emergency stop for the dudes at McDonald’s (not for me, I hate McDonald’s but as much as Europeans talk shit about American’s being fat and eating McDonald’s, they sure eat there more than anyone I’ve ever known in USA)… we rolled up to the Antwerp park, but had already missed the Consolidudes and just a few locals were skating the pool. Antwerp is a few years old by now and most people know what it is like, so I won’t get into it so much, besides, you should read the 7 pages article in CONFUSION ISSUE #1 about Brusk and Team Pain building the park. The pool is super fun, I dare you to drop-in in the shallow end! The main area has lots of long lines, BIG vert, and a full pipe with a cradle at the end. Antwerp is a good city and it would behoove you to spend a few days in the city and at the skatepark.

Tobi Hees (MVP of the trip) in the full pipe. Antwerp, Belgium.

We came, we saw, and we were conquered, so it was time to hit the road and head back to Köln. Like battered soldiers, we returned home from combat, to rest up for the week, before the next adventure began. This time, in Malmö, Sweden…. 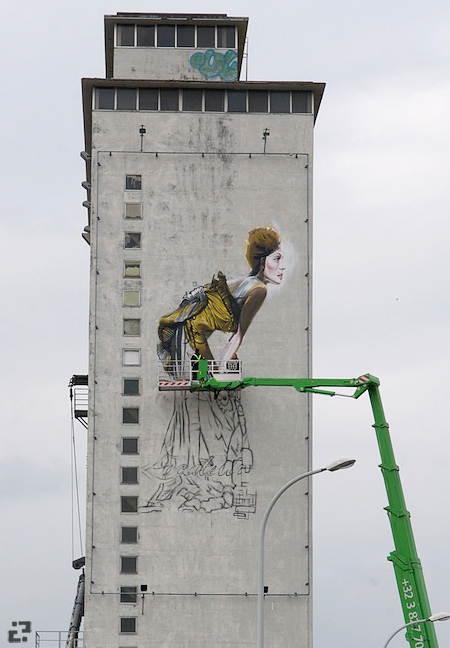 Across the street from the Antwerp Skatepark, a work in progress

….and when you see these smoke stacks, you know the end of the tour is near…