“When I moved to San Diego, Marcel was one of the first friends I made, one of those people that’s just easy to shoot the shit with. On top of being a rad person, he’s one of those people when you watch him skate you can only think, “Wow that was GNARLY,” and, “that’s a warm-up line?” Filming this edit was fun, as is any session he’s at.” – Carly Cunningham

The past year of RAW #gnarcel footage to go with the extra photos that didn’t make it into his interview in the print version of Confusion Magazine issue #23.

So you grew up in Wisconsin yeah?

What inspired you to skate growing up?

Like, the beginning? I mean, I pretty much always had a skateboard.  I had everything with wheels pretty much. Bikes, blades, scoots. I liked it all. Tony Hawk’s Pro Skater 4, I definitely had that too. That was probably one of the first things really getting me hyped to skate.

What were some of the first things you grew up skating?

Curbs. No waxed curbs or curbs that were that grindable. Dry curbs. So we’d just do tranny and street tricks on a curb. Then it went to gaps and rails. The closest actual skatepark to my house was this one with a bunch of metal ramps on some random blacktop lot. Super shitty. The ground was all crunchy and there was always glass everywhere. The ramps were sinking into the ground so at the bottom of each ramp there was a gnarly lip. Then there was this other concrete park on the other side of town. It was definitely more “skateable” than the one near my house. Way more fun. Then after I started high school, I met a homie at that cement park and he introduced me to the squad from Freedom Skateshop. They skated this place called the Dust Bowl all the time. It was indoor so I started skating there a lot more, especially in the winter. That place was one of a kind. It was masonite so we were always repairing and having maintenance days. But it was the shit. It was fast and deep. We had rigid, welded coping in parts that was loud. And then when the Grindline dudes would come through town and replace coping at the skateparks, we’d get the leftovers for the bowl. There were tons of obstacles and death boxes. It was kinda like a pool. After skating there, I felt prepared for anything. But yeah, they ended up tearing that place down which is one of the reasons I left Wisconsin. But all the homies who were a part of the Dust Bowl are still around, holding down the local DIY scene. Keeping it real, all in the name of skateboarding. 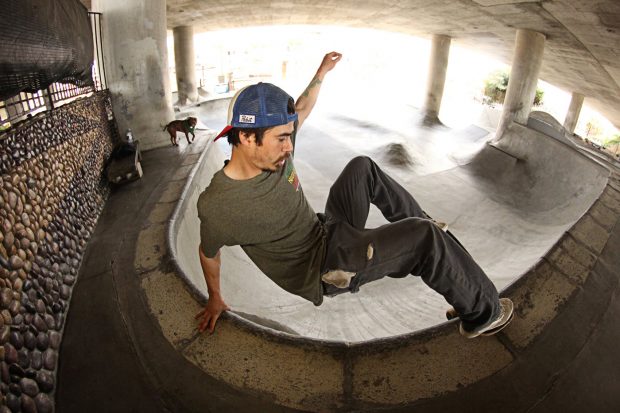 Layback over the Loveseat – by Tyler Hopkins

How did the pilgrimage from Wisconsin to San Diego go down?

It actually happened really quick. My friend was on a road  trip coming down from New York by bus. So two days prior, I decided to buy a bus ticket and go along with him. We went through Texas and swooped up his car and then eventually ended up in San Diego. We planned on getting jobs here to save up some more money and continue on our trip, but then I got kinda stuck here with my girlfriend.  We were homeless for a second and staying in tents. But then everything just started working out. I used to watch hella videos of Washington Street growing up so I wanted to really see what the whole place was about and I fuckin’ loved it. Probably the best place to get stuck if you ask me.

What are your top three dream skateparks? 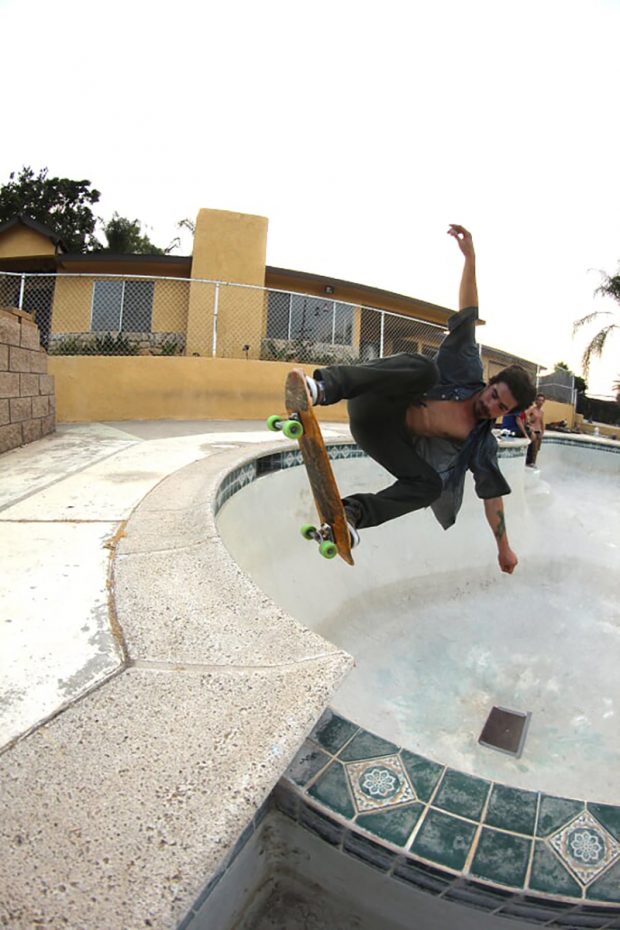 What skate videos influenced you the most growing up?

This Axe Was Made To Grind. It was the only video I had growing up. This older cat who was a local at the park growing up just handed it to me one day. He kinda watched me grow up, he’s a good dude and he still texts me to this day all hyped up and wishing me the best and shit. But yeah, he gave me that video when I was 15 and said you’ll love this video, it’s got all the dogs, it’s everything you’re into now but don’t even know but you will know. It blew my mind right off the bat though. And I mean, shit, I still only have like three skate videos. That’s definitely one of them.

How does it feel to be skating with all the people you watched in videos growing up?

It’s pretty amazing, to be honest. I mean, for that being one of the only videos I watched; what I based growing up off of, I’m almost just living it. I get to see these people all the time and skate with them. It’s rad. I love it.

Greyslide over the Loveseat – by Tyler Hopkins

Dang dude. I don’t even know.  I’ve seen a lot of cool things happen there. Just good sessions. Chris Cope’s backside invert on the cradle. Just seeing some of my favorite people skating there. I don’t know. I just go there to skate and the stories happen.

Frontside Doubletrucker over the Steps – by Tyler Hopkins

Alright, what was going through your head when you frontside inverted the cradle?

It felt like a flash. I was just up there and saw darkness then hit the bottom of the ramp. Honestly, I’m still tripping on it. I still can’t even believe I did it. It’s been at least three weeks, maybe a month. I’m still trippin’. People come up and talk to me about it and I just have the same conversation. Still can’t believe it.  I’m still just geekin’ on it. Just blurting on the inside. There was just a lot of hype. Brandon, B.P. was yelling at me through the mic. The hype was real. There was a lot of homies there, so.

Top five bands that influenced you?

Dang. Well from when I was younger, definitely DRI. And then some Darkthrone, fell in to some grind-core; Repulsion, Archagathus, Revenge. Was that five? I think so. Shit. Mystifier is rad. They’re loud and noisy.

Frontside Pivot at the Love Seat – by Brandon Ayala

What’s your favorite shape of pool?

That’s a hard one. Probably any pool that I haven’t skated. They are all cool.

Judo’s a good barge dog. He’s quiet. As long as there’s a lot of grass he’s down. He’s just gonna want to lay down and take some pisses. He doesn’t like being tied up though. If he’s tied up he feels like he’s missing out on the session.

What are some of the raddest places you’ve skated?

Uh, Lincoln City. Seattle. That was cool. Just anywhere skating pools, Riverside. That’s fun. I mean I haven’t gone to many crazy places, at least yet.

Mammoth. Just any other parks in Oregon. That Cayman Islands park looks awesome. The new Boise park looks fun too. I dunno, I like things under a bridge. I hope I get a chance to skate Channel Street. That place looks like the jam. But I pretty much just want to go anywhere I’ve never been.

Tit Transfer at the Nude Bowl – by Tyler Hopkins

Who’s helping you out in Skateboarding these days?

Thanks to anybody who’s been nice along the way. Any of the homies and fiends I’ve made out here. All the homies back in Wisconsin. Freedom Skateshop. Slappy’s Garage. Anybody who’s awesome. Keep being awesome.